GWAR, Me, and the On-rushing Grip of Death: Part 42

Heartfelt thanks for the outpouring of support last week. Now on with the (typically disgusting and spew covered) show! The story continues!

I was deeply touched (by a clown) at the public out-pouring of support after my admission of complete and abject pathetic-ness in the last installment. Since then things have improved immensely, though I suppose due to my drug addiction I shall never be a truly wealthy man. Weed, caffeine, and sugar sure do take a bite. Now I find out you can be addicted to food…that you can be addicted to stuff. Man, I am fucked-up!

I want to make one thing clear before we get back to the action. Yes, it’s true that my scumbag roommate ripped me and GWAR off and then disappeared. And it’s true that he would not give us the pass codes to the sites he had been working on for us, so we lost gwar.tv, the Crack-a-Thon, and the gwar-b-q websites. But he never succeeded in taking ONE CENT from the various donations you wonderful fans gave to GWAR.tv and the Crack-a-Thon. That’s because we immediately spent that money on the cameras, lights, and tripods that we will be bringing you this year’s Crack-a-Thon with. That stuff stays locked-up in the Slave Pit. Just because this scumbag fucked us over doesn’t mean he stole from YOU. We still have the stuff YOU BOUGHT US and plan to continue to entertain you with it. So for now, GWAR TV is residing here, and [GWAR.net][3] remains the official cyber-fortress of your Lords and Masters, the mighty GWAR! Don’t believe it unless you see it there.

Now, there are a few of you guys that were duped and cheated by said scumbag, with fake ebay auctions and fraudulent “donation” links. We are in the midst of tracking down every one of these transgressions and taking the appropriate action. He will get his! PayPal and ebay WILL refund your money after checking out the claim so if you think you got ripped, email me at maggotmaster13@gmail.com!

OK, back to the story. When we last left off, we were waiting for “Hell-o” to drop and slowly expanding our tour horizons thanks to our Golden Battle Barge. It was 1988, and GWAR was starting to blow up! So it’s time for… 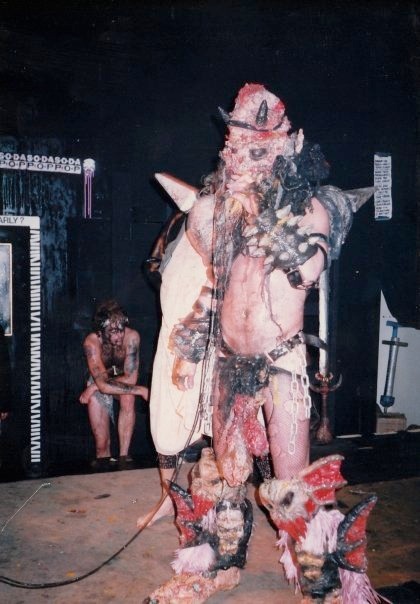 Me and Bones, Seattle, 1989. Kurt Cobain was at this gig. Unfortunately he had to leave early to go shoot junk.

GWAR, Me, and the On-rushing Grip of Death: Chapter 42

Fuck a Chick From Playboy”

The City-Gardens gig had increased our following tremendously as word of our triumph over both Glenn Danzig and the Skinhead Army spread up and down the east coast. Alarmingly we didn’t really seem to be attracting many hot groupies, and seeing as my one and only goal at the time was to use GWAR as a way to get laid as much as possible, my standards (which weren’t much to begin with) dropped alarmingly. We however had no problem attracting tons of dudes, and occasionally we even liked them. One such person will go down in history as “Bones,” a perpetually-stoned band-dude who started showing up at all of our Jersey gigs. He had good pedigree as a Dayglo Abortions roadie and was smart enough to understand that any attempt at breaching our security screens had to involve an offering of some sort. And, much in the way Proto-Slave had used his constantly-brimming cooler of beers and bologna sandwiches, Bones and the “bones” he rolled became a regular part of any northern venture.

Bones was hard-working, trustworthy, and always had pot. And he was always willing to drive, and always had pot. One day I had a horrible hemorrhoid and Bones explained that if I “tucked” the offending bulb back in the anus where it belonged, chances are the pain would subside. It did! Bones’s quirky home-spun wisdom, tempered by years of military duty, gave him an earthy texture that nobody hated too much and would go on to figure in Slave Pit affairs for years. And, his contributions to the Slave Pit verbal lexicon (this gig is geeked!) will go down in history. Bones still lives, and you can see his band, Bloody Crackdown, at the GWAR-B-Q!

I believe Bones had something to do with us getting a gig at Princeton. Our gigs at colleges were usually disasters and this one was no exception. Some braincell had the great idea of putting us in their frat’s dining hall, which was pretty much destroyed by GWAR’s relentless assault of spew. The one good thing about it was that I met this chick who had actually been in a Playboy spread about Ivy-League schools. I had seen her picture before I met her and she looked fucking hot…I mean she was in Playboy, right? But when I met her she had the face of a horse, the breath of a wrestler, and stood about six inches taller than Balsac. The only way to make sure she wasn’t a man was to fuck her, which I did in a closet next to a room full of jeering frat-boys. As Bones became a regular part of this adventure (I believe he was watching the door)–and many more–he slowly became our music-slave, and the ex-roadie/ex-Blackhawk crew chief found a place as GWAR’s guitar tech—and a new home in Richmond, Va.

Back then we were not the house-washing capable spew machine that we are today. Today we roll with a powerful compressor and a bunch of spew tanks that look like atom bombs. Back then we had a rickety wooden structure that housed anywhere up to ten or so regular fire extinguishers. We would generally roll into gigs late, due to the Golden Battle Barge not being able to travel any faster than 45 miles an hour (straight down off a cliff), and filling and priming the tanks was the first and foremost concern. That would usually involve The Mantis frenziedly searching out a grocery store for those little bottles of food coloring, a garden hose to fill the tanks, and finally a gas station with a working air pump to prime the devices. The age of the tanks would make them wildly erratic in the range of their capabilities, and anything from a tepid dribble to an eye-gouging blast was likely to come out of them. But blindness was far from the only danger of the spew cart, as we called it.

First on all it was designed in a manner that made it way easy to trap your fingers in the plywood handle, and of course the wheels never worked, so you ended up dragging this thing around everywhere, mangling your digits in the process. But by far the worst to suffer were the fans. Back then we really didn’t care too much about what we spewed, or maybe we cared too much, because we never missed an opportunity to fuck with people. We would use hot water, put salt, or sugar, or even worse flavors in it. Sometimes the creamer we would use for fake cum would rot inside the can overnight or even worse bake a couple days in the bus and become completely rancid. So when Oderus blew his filthy load (or even worse when we fucked up attaching the lines to the right place and blew it out a decap), he really did blow his filthy load–to the point that automatic mass-vomiting would ensue. It got so stinky that we actually considered chopping people’s heads off for real.