GWAR, Me, and the On-rushing Grip of Death: Part 41

Our hero returns from the European tour broke and in arrears. But, with the sunny disposition he’s known for, he soldiers on. GWAR! Part 41! 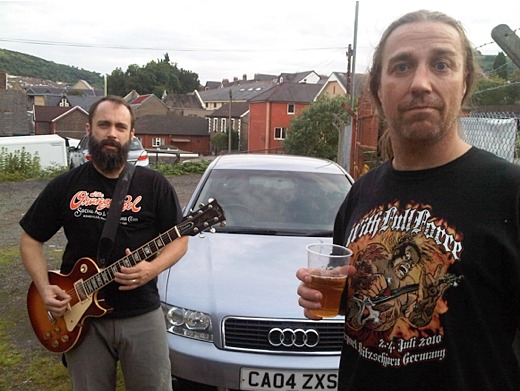 Me and my buddy Neil Fallon from Clutch hanging around before a show in England while he gives me some beard-growing tips. Damn is my nose broken...

It is a time of great tumult for the brave rubber monsters of GWAR, as the crappy economy finally caught up with us. For the first time in a long time, we had gone on a European tour and returned home with no money. Sure we had our stories of red-light wanderings and beer-drenched debauchery, but without cash to pay the slaves their miserable pittance, they soon resorted to eating their own fecal matter. And just when you thought it couldn’t get any worse, they began eating other people’s fecal matter. They would make fecal matter out of eating fecal matter, and then eat the fecal matter.

And while I am at it, isn’t it wonderful the way that words that describe nasty things are always so appropriate, like for instance “fecal matter”. It’s right up there with “phlegm” and “buboes”. Who invents these words anyway?

And while I am still at it (as I haven’t really figured out what to write about this time), who are “they”, anyway? I first heard about “them” when I was in elementary school. I was asking a question about the textbook I had just smacked Calvin Livesay* with. Asking why a certain section was written a certain way, I was informed that “they” had done it that way, and nobody ever knew why “they” did anything. So right off the bat I was convinced a shadowy group of semi-demonic beings known as “them” controlled everything from what was in our textbooks to how much a Big Mac cost. Still am!

But to get back to the story—rising fuel costs, a lousy exchange rate, and a ravening beast that eats money (named GWAR) had left us in arrears, but were we worried? Fuck no. We had been through periods of no money before, like the entire first five years of our existence. So I came home with my head held high, ready to leap into preparing for the GWAR-b-q and catching up with my mountain of overdue painting commissions. But a fate more hideous than eating fecal matter or being broke awaited me.

I first met Symptom about three years ago. His sallow face and darkly-circled eyes made him look like a junkie and I thought he was until I heard he had “rotten guts,” a condition that made him routinely beg near-strangers for pain medication. What made him different from the rest of my friends like that was his skill with the internet and constructing web sites. His help was immeasurable on a number of projects, and soon enough he was accompanying me to NYC to help me stream the Crack-a-Thon to the interweb. After that he began to enjoy more GWAR responsibilities, and soon the GWAR-B-Q and GWAR.TV sites were up and running. Much pleased with this, and desperately needing another responsible person as a roommate, I agreed to let him move into my hovel.

But cracks were starting to show. I returned home from my fall tour to discover that in my absence, Symptom had moved his girlfriend into my house without asking me. I was pissed to say the least but after hearing the sad story of how she had nowhere else to go I began to waver. She did have a job, and another income in the house would definitely help. So I caved in like a spaghetti lean-to in a rain-forest.

Then it got weirder. Symptom was out the door early every day, usually off to work by seven. His wench would follow a little later. When they returned from work, they would go straight into their room and not leave until it was time to go to work again. Now, I can sort of understand that. My house is a bit of a mess, and my other roommate is a creature from Hell. Plus I am sure the young couple was enjoying having sex with each other. But it really seemed like a couple of junkies had moved in. I told the guys in GWAR to cool out on this guy, who up until this point had been a Slave Pit star on the rise. I knew something was up, but I just couldn’t put my finger on it.

The wheels had fallen off (and burst into flames) before I got home from the latest GWAR European tour. Symptom and his girlfriend, who for the purposes of this story will be called “The Scumbag’s Equally Scummy Girlfriend”, were gone, moving out in the few days before I got back and using MY TRUCK to do it. They left behind four months of unpaid rent and bills, as I, in my infinite stupidity, had allowed Symptom to be the one who collected said monies every month and make sure they got to the right hands. He had performed this task admirably up until that moment, to the point where I completely trusted him…and then he fucked me HARD.

Four grand in rent…bills neglected to the tune of many hundreds of dollars…an eviction note on the door…but that wasn’t the worst thing, no, not by far (though that was really bad)…the worst thing was that this piece of shit had actually taken pieces of my art out of my private collection, sold them on ebay, and then never sent the merchandise. A stack of priceless GWAR concert DVD’s, some going back to the late eighties had also disappeared.

Why am I sharing this with you? Well, first of all I needed to explain what happened to the GWAR-b-q site and GWAR.TV. They are gone and won’t come back. As for the rest, I’m not sure. I only know that a betrayal this deep, by someone who I considered a valued friend and ally, cuts to the bone, and by writing about it I might enjoy some sense of closure. But it never ceases to amaze me how low humans can stoop in their quest to elevate themselves. The damage to my life has been vast, and it could not have happened at a worse time—a time in which I was pretty broke already. It means instead of working on GWAR or my art, I have been forced to take any manner of actual “work” in order to somehow get myself out of this hole.

But I will! Hang in there brave followers of GWAR, greener pastures await! For next month is the 2011 Crack-a-Thon, and even greater, the GWAR-B-Q is soon after that. And after that we have an amazing fall tour with some awesome bands which I will be announcing soon. Before you know it, all will be right in the world again. I will get caught up with all of my projects, make good money on the fall tour, get out of debt, and hopefully find a good roommate, one that won’t steal my art and money and do their best to ruin my life. I will get to the happy place again, and there will be much rejoicing.

The same cannot be said of my ex-roommate. Wherever he is (and he seems to have disappeared off the face of the earth), whatever he does, every morning when he wakes up and stares into that haggard face looking back at him from the bathroom mirror, he will see the face of an undeniable piece of shit, someone that took the good will of a good friend and turned it into a weapon. The face of someone that stole art from an artist who depends on such art to survive. A liar, a user, and a thief. He will see the face of a LOSER, and he will have that face for the rest of his miserable life.

So if I was supposed to get you some art by now, please continue to be patient (even the guys who have been waiting years). My life is currently a disaster zone and it may take a little while to get out of it. But I just had to get that off my chest before starting the next episode of …

GWAR, Me, and the On-rushing Grip of Death: Chapter 41

* Poor Calvin was one of my first victims. One day in fourth grade I attacked him and pushed his head into the folds of one of those accordion walls, which I then closed on his neck. I received no mercy from the elementary school Lords of Discipline, and it didn’t help that the poor kid was actually retarded.