GWAR, Me, and the On-rushing Grip of Death: Part 40

GWAR opens for Murphy’s Law and, in D&D terms, we rolled a twenty, got double damage, instant kill, whatever…all I know is that the only blood the skinheads got to enjoy that day was fake. 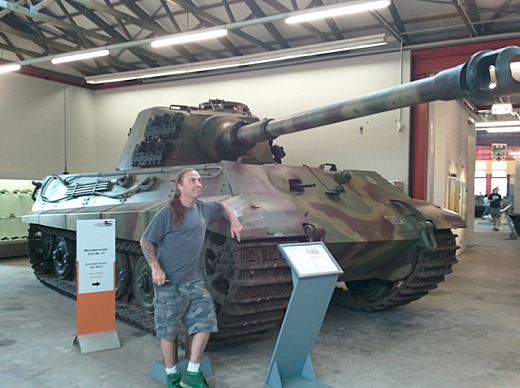 Greetings from Das Deutsches Panzer Museum! I recently realized the dream of a lifetime by finally getting to this place where it was said to house every example of German tank design ever made–some in running condition. Of course at that point my fertile imagination took over, and soon I began to envision a parade-like atmosphere to the place, as drunken Germans filled sagging bleachers beyond capacity, all to witness the continual running of tank after tank in an all-to-familiar display of military prowess. Unfortunately budget cuts have stopped the museum from running the tanks much anymore, but it was still one of the coolest places I have ever been to…check out my full coverage over on Facebook.

But, I am back from Europe, ready for another summer in the city! So it MUST be time for another episode of…

GWAR, Me, and the On-rushing Grip of Death: Chapter 40

The Wall of Death 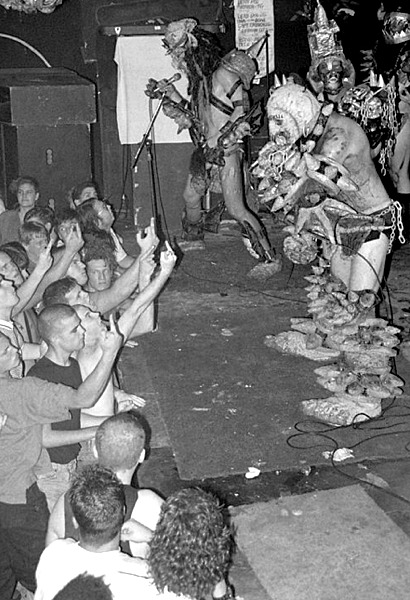 The New Music Seminar, held every year in NYC, was the equivalent back then to what SXSW is today, except it was like a million times smaller. We had made quite a stir there when we walked into the middle of a huge conference and contemptuously made our way to the stage, Sleazy handing out fake (but very convincing) vials of crack to the horde of music writers, label people, and NYC hipsters. Once we got to the stage I didn’t really know what to do, so I turned around and took a hefty swipe at the giant banner which hung over the place. To my delight the blow managed to knock it off its support on one side, and the whole thing plummeted to the floor with a satisfactory crash. After a couple of bellicose remarks, we were out of there.

After about a year of playing mostly southern small-town venues, the east coast was finally beginning to open up for us, and one of our favorite places to play was in Trenton, New Jersey, at the infamous City “Shitty” Gardens. The hardcore scene was exploding all over the country and it wasn’t uncommon to have ten-band bills where every band was a Bad Brains or a Black Flag, and the tiny dive punk bars which had spawned the movement had quickly been outgrown. In NYC The Ritz was the large venue of choice, and to the south Shitty Gardens, run by the notorious postal courier “The Male-Man”, was the spot. Tongues were wagging about GWAR, and we were offered a couple of gigs at The Ritz and Shitty Gardens opening up for Danzig, who had just put out their first album. It was the first time he had played with the new band live, and for us to land a main support gig was pretty awesome.

The show in Manhattan was all Glenn’s but at Shitty Gardens a curious thing happened. After Danzig had finished their main set, the crowd didn’t launch into what you would have thought would have been raucous adulation but was instead surly silence which quickly began to form into a chorus of one chanted syllable, which grew in numbers and volume until the sound of it was unmistakable. We heard it clearly from backstage, and we were sure Glenn did as well.

It was the first time we had ever heard anybody chant our name except for ourselves! Maybe we weren’t complete losers!

After the show Glenn came to visit us in our dressing room, flanked by at least ten burly weight-lifting buddies, all in leather jackets, and a daffy stripper that for the purposes of this chronicle shall be known as Bubbles.

“Good show, man…” said Glenn, extending a burly paw. As one his minions nodded their agreement. But then Bubbles ruined everything.

“Oooo, whats this?” she said, reaching for and picking up one of the slave dicks, knowing full well what it was. Acting from instinct, she held the cock up to her face, where the last wad of stinky coffee-creamer and carrageenan faux-cum was jarred loose, spewing out of the slave cock with considerable vigor and draping Danzig’s girlfriend with its infested load.

For a moment there was silence as everyone looked on in horror. Then Danzig, with military precision, spun on his boot-heel and strode from the room without a word followed by his buddies who simultaneously emulated the leaders exact move. Last to leave was Bubbles, a confused yet-longing look thrown over her load-drenched shoulder on the way out.

We got a ton of good press following these antics. East Coast Rocker said that after GWAR, watching Danzig was like “watching grass grow.” And the Village Voice said we “rocked them like a boxed lunch and a giant Japanese robot.” Our friends in The Lunachicks had hooked us up with the nefarious persona of Jimmy Gestapo, singer of Murphy’s Law, and one of the few people in this story who doesn’t get a nickname because he already had one. Jimmy got us another Shitty Gardens gig opening up for his band, known favorites of the skinhead scene, which at the time was considerably more fearsome than it is today.

It was a huge gig for us and we planned appropriately with a new invention called “The Chandelier of Blood.” This device was made up of three huge hooks, on which were impaled three severed heads. Spew tubes terminated in the mouths of these three heads, and the idea was to have a spew device which could hose the crowd while being operated from backstage. We weren’t sure if it was going to work or not.

From the first song the local ape-men didn’t know what to think of GWAR and didn’t really know what to do. Some slammed, some stared, some made threatening gestures, but everything seemed under control…until the first decapitation hosed the first few rows with a drenching spray of food-coloring gore. Maybe they didn’t want to get their laces dirty, but the skinheads didn’t like that AT ALL.

Soon the threatening gestures had led to jeers. The mob began to get ugly as Sexy and I watched the scene with growing concern. There were no bouncers, no security, just us and a 300+ angry mob that was forming up in a wide wall of baldness, stretching from slam-pit side to slam-pit-side, and glaring at us with evil intent. It was the infamous “Wall of Death,” New Jersey skinhead-style, but instead of consisting of two opposite sides of the slam-pit there was just one ugly formation pointed straight at us, which after a brief period spent forming up charged the stage with a blood-curdling scream and the stomp of a hundred Doc Martins!

Right in the middle of a song, we watched in horror as the wall came closer, and closer, and then suddenly there was a great vomiting of spew, a tidal wave of gore, which blasted out from the stage and crashed with contact-lens ruining intensity into the front several ranks of the the skinhead menace. The effect was immediate, chaotic, and hilarious, as the “Wall of Death” instantly became a “Wall of Buffoons.” From backstage, someone had loosed the Chandelier, which worked far better than we ever dreamt it would, and caught the horde in mid-charge with a debilitating dousing of what I am sure most of the baldies thought was an AIDS-infested substance. In D&D terms, we rolled a twenty, got double damage, instant kill, whatever…all I know is that the only blood the skinheads got to enjoy that day was fake. Their charge routed and their idiocy exposed, the mob broke apart under continuing blasts from our beautiful contraption, which I believe never worked again.

NEXT TIME! GET READY DEAR READERS! EPISODE FORTY-ONE OF “GWAR, ME, AND THE ON-RUSING GRIP OF DEATH”, HERE IN TWO WEEKS…WE HOPE!

Like this? Then be sure to check out my first novel, Whargoul, now available at Amazon.com.