Chronicle: don’t EVER give teenagers superpowers

I decided to take a break from movies about rape, sex, crossdressing, and British people, and check out Chronicle. I learned that you should never give teenage boys superpowers. It had been almost two months since I’d seen a movie that didn’t involve rape, sex, crossdressing, or British people, so I decided it was time for a change and set out to see Chronicle. I went in not knowing much about the film other than Vince from Friday Night Lights was in it, and it had something to do with teens + superpowers = hijinks / lessons learned. I like to keep my finger on the superhero pulse just in case something really incredible comes out that I can add to the running list of awesome movies my three-year-old son should see at some point in his life. Speaking of, here’s some tangentially related thoughts:

I was almost the only one in the theatre for the Saturday 11:15am showing (which is one of my dreams), but at 11:10am1 in walked a crowd of people including a couple of adult-accompanied tweens/teens. No big deal, because Chronicle is rated PG-13, and I’m a big proponent of letting kids consume culture at their own pace, not an arbitrary government-decided-upon pace.

However, the trailers before the movie were super awkward. Maybe it’s just me, but I don’t think Friends with Kids is an appropriate trailer to show before something like Chronicle.2 It’s important for parents to vet the movies their kids watch, but how are parents supposed to vet the trailers, or even know which trailers are running? It’s not that the Friends with Kids trailer is emotionally scarring, it was just completely and totally unexpected. 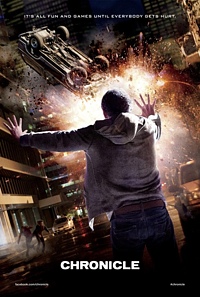 UNLIKE THE PLOT OF CHRONICLE.

It’s a story we’ve all heard before: three high school kids (the abused, mistreated geek; the uberpopular, athletic class president; and the good looking, sophomoric philosophy guy(?)) out partying at a rave fall into a hole and after a brief encounter with a crystalline entity, discover they can move things with their mind. They become unlikely friends, and as their powers grow so do the stakes.

The first half of the movie is filled with a lot of exactly what you’d expect from teenage boys who suddenly develop telekinesis. They use their newly found powers to hit each other in the face with baseballs, attempt stupid life threatening stunts, and impress girls (in various telekinetic ways). They also smoke a lot of weed, maybe? It’s not clear because it’s never shown on screen, but the film implies that, post-superpowers, the trio are constantly baked.

The great thing about telekinesis is that its the most mutable of super powers. Sure you can toss things about–lego, rocks, or even cars. But if you toss yourself around, suddenly you’re flying. And for the defensive, if you can stop objects from touching you you’ve got a force field. Chronicle does a great job of walking you through the natural evolution of a super ability, from cute tricks to horrible displays of power.

And that’s the second half of the movie (which is about forty times better than the first half).

This is Josh Trank’s directorial debut and he’s only 26! TWENTY SIX. MIND BLOWN. What (did you do | have you done) by the time you (were | will be) 26? Whatever it was, it probably wasn’t as cool as “direct a movie currently sporting a 86% on Rotten Tomatoes.” Trank doesn’t do anything (well, almost) to distract you from the movie, which means he’s probably a guy to keep an eye on. The cast is solid, as anyone who has seen Friday Night Lights knows, and he does a good job at getting them to realistically replicate teenagers. Which is maybe a problem–turns out teenagers are really annoying.

However, he has extended the Blair Witch gimmick to its, hopefully, logical conclusion: all of the shots in the movie are taken from in-movie cameras.3 The mistreated geek (played by Dane DeHaan, who, incidentally, looks just like a Gilbert Grape-era Leonardo DiCaprio) is “videotaping everything,” and one of the random love interests has a “video blog.” Throw a little floating, telekinesis-controlled camera work into the mix and you’ve got solo scenes that are still in the documentary style. The whole thing is pretty much whatever until the climactic finale, when the set of available cameras extends to news cameras, helicopter cameras, and store security cameras. Then, the effect is actually pretty cool.

Every time one of these “teens have a crazy and possibly supernatural adventure” movies comes out I get really excited. I want to be able to grab my family, rush off to the movie theatre, and be ensorcelled for the next two hours. Then I want to spend the next three days excitedly talking it over.

Really, in all of our hearts, we just want to watch The Goonies4 over and over.

If you have any interest in superheros, teens, or teens with superheros then you’ll probably enjoy the flick. It works well, albeit predictably, as a origin story. Also: VINCE FROM FRIDAY NIGHT LIGHTS.

Let’s face it: teenagers are annoying, specifically male teenagers. This is an entire movie about teenage boys who are suddenly given GREAT POWER. There’s a good bit of violence and language, so if you’re planning on taking your tween, be aware.

Plus, if you’re hoping that it’s going to leave you with that warm, Goonies feeling, you’re going to be disappointed.