It’s great to want to be alone, or rather to be enough not alone that the chance to sit in an empty theatre for a couple of hours sounds like a heck of an evening. Some people, however, are so often alone that they become forever alone. This is what we’re dealing with in Albert Nobbs. One of my dreams, which I just realized the other night while sitting in the theatre waiting for Albert Nobbs to start, is to watch a movie in a movie theatre by myself. Think of the freedom! You could sit wherever you wanted!1 You could cough whenever you wanted! You could look up actors on the IMDb app with abandon! And there I was, four minutes till showtime, when in walked another moviegoer and my dream was ruined forever!2

It’s great to want to be alone, or rather to be enough not alone that the chance to sit in an empty theatre for a couple of hours sounds like a heck of an evening. Some people, however, are so often alone that they become forever alone. The aloneness effects them and becomes a part of who they are. It can make them weird. Now, I’m not talking about anyone and everyone who’s lonely, just that small group of people for whom social isolation has left them strange and unable to relate to other humans.

This is what we’re dealing with in Albert Nobbs. 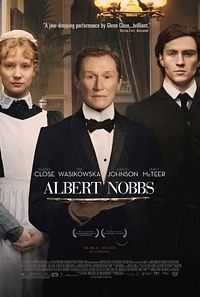 The eponymous character, is an aging waiter3 who works in one of Ireland’s hotels serving rich Irish folk their dinner, shining their shoes, and bringing them their liquor. But, wait a second, SPOILER ALERT: Nobbs is a woman (specifically, Glenn Close)! JK JK, that’s not a spoiler alert at all. You’d know that if you saw any of the trailers, and it’s clear to the audience that Albert’s got some lady parts going on there.

Nobbs, as we find out, was born a bastard to a member of Irish high society and sent off to live in a convent, well supplied with cash for her upkeep and maintenance. When her mother died, the money dried up and she was thrust out into the world, left to the worst that Ireland’s streets had to offer–which turned out to be violence and rape. To survive, Nobbs concealed her gender and took a job as a waiter. And that’s how things stood for forty years–that is until Mr. Hubert Page (Janet McTeer) shows up.

SPOILER ALERT: Janet McTeer is also a woman. This will not surprise you, but Mr. Nobbs just about has a heart attack when she learns that there are other women going about life disguised as men. Finally, she’s not alone. Until this moment, for Nobbs, humans were creatures to avoid and keep secrets from. But now, they are people to whom you can tell stories, drink tea with, or even–in a charming 19th century Irish way–romantically “walk out with.” These ideas change Nobbs, and she starts, in tiny ways, actually living her life. But by this point, it might be too late…she might be forever alone.

Let’s all be honest: we’re not here to see how life works out for Mr. Albert Nobbs. We’re here to watch Glenn Close, in an Oscar-nominated role, play a woman who plays a man. It’s a role that Close is super familiar with: she played it on “the stage” in the 80s and even co-wrote the screenplay. She does a fantastic job with it, but, embarrassingly, I didn’t get it at first. Here’s the thing: Close isn’t playing a debonaire man’s man, like say, George Clooney.4 She’s playing a woman who’s spends her days masquerading as a man and who’s brain is slightly addled after years of utter loneliness. Her character’s portrayal of a man is terrible, which is awesome!5

It’s not just the Glenn Close show either. Janet McTeer, who’s character becomes Nobbs’s defacto life coach, is Oscar-nommed as well. McTeer is so totally awesome, and she’s going to blow your mind when she steals some scenes from Close. Both actors are talented and play interesting roles, so you really can’t lose. It’s kind of like The Help: maybe not the best movie you’ve ever seen, but there sure is a lot of fantastic acting going on.

If you’re trying to work your way through all the major-category Oscars, Albert Nobbs has two: Glenn Close (Actress in a Leading Role) and Janet McTeer (Actress in a Supporting Role). Also, do you love Ireland? Nobbs is filled with lovely Irish accents, including Bronagh Gallagher’s, AND SHE’S ACTUALLY IRISH.

Do you hate Ireland? JK JK.

I wasn’t a huge fan of the story, but enjoyed the movie for the acting heavyweights. If that doesn’t sound fun to you, let this one pass. Also, it’s a period piece. For me period pieces, especially ones set in 19th century Europe, always seem like a something from the History Channel or an episode of Dr. Who.