Super 8: A Time Machine of the Highest Order

Spielberg’s latest venture is a collaboration with his former lackey, J. J. Abrams, both of whom pay homage to an era of filmmaking that was more elegant, more clever, and just more entertaining than it is today. Oh, and there are plenty of explosions to keep us 2011 folks satisfied.

Remember going to the movies in your weird little turtleneck and corduroy pants, seeing that big AMBLIN ENTERTAINMENT logo pop up, and thinking, “This is the apex of excitement.” Only you probably didn’t say anything at all, you probably just looked up at the screen with shining eyes, absently shoving popcorn into your mouth, and letting E.T. mesmerize you. 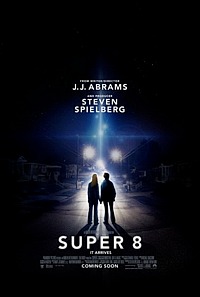 Super 8 so effectively brings you back to that moment that it’s a little disconcerting. But in a good way — a way that you hadn’t predicted. Sure, other movies take place in the 70s and 80s (this one is in 1979), but this movie makes you feel as if you yourself are somewhere between those decades, and not just because of film quality or anything like that. It’s because the filmmaking itself is so similar to that which we all loved, the kind where a bunch of adolescent boys (the fat kid, the nerd, the skinny guy with big ears) stumble upon something far too adult for them to handle. Yet, through their amazing kid faculties (the kind we kids absolutely KNEW we all had), they put together more pieces of the mystery than the adults can and end up playing a big role in what happens next. Through it all, their blissfully naive, pubescent dialogue crops up at the unlikeliest of moments, keeping both us and our parents snickering in our puffy jackets.

J.J. Abrams of “Lost” fame wrote and directed Super 8, and like “Lost,” the unusual circumstance around which the action of the film centers comes with so much build-up, that by the time you know the full story, you can’t help but be a little disappointed. Therein lies the single but impossible to ignore flaw in an otherwise truly superb film: fabulous script, killer directing, amazing costuming, scenery, and props…just not a particularly mind-blowing story.

The rest of it, though, is brilliant. Abrams clearly immersed himself in everything Spielberg (well, early Spielberg anyway) before presenting the man himself with a script worthy of E.T.’s accolades. The simple yet proven plot arc was the solid backbone of many of the movies of the 80s, a decade chock full of elegant filmmaking. Super 8 adheres to the formula beautifully, so it’s that much more unnerving to see 2011 special effects when you feel firmly planted in 1983.

But what happens in this singular caper? Well, nothing short of four or five 13-year-olds trying to make a zombie movie on Super 8 film, when a seriously intense train wreck unleashes a mysterious and destructive creature on their small town. Joe, adorably played by Joel Courtney, wrestles with some real-deal family, friendship, romance, and monster issues with admirable aplomb. Meanwhile, the hilariously irrelevant chatter of his pack of friends keep everyone in stitches. There is simply nothing as awkward as a teenage boy, and the Spielberg/Abrams combo captures it with an authenticity that we’d all but forgotten.* And it’s absolutely time to bring it back.