What to expect: #12 Villanova and a case of the Novembers

#15 Virginia Commonwealth University faces #12 Villanova in the semifinals of the Legends Classic Monday night at 7:00 PM in Brooklyn, NY. Since the 2011 run to the Final Four, Coach Shaka Smart and the VCU Rams have thrived. The Rams are coming off of their fourth consecutive trip to the NCAA Tournament, Coach Smart has yet to win fewer than 26 games in a season, and VCU has been able to participate in several headline “exempt events“.

But success has been scarce for VCU in November. The Rams participated in the Charleston Classic, Battle 4 Atlantis, and Puerto Rico Tip-Off the last three seasons but only boast a 3-6 record including two-first round losses. Despite a talented roster, last year in San Juan the Rams were dismantled in the opening round to Florida State 85-67 before squeaking by LBSU and losing to Georgetown. All in all, the Rams are 13-8 (.619) in November since the Final Four and 69-17 (.802) in all other months combined.

Granted, big-name, multi-team events pit the Rams against talented teams like #19 Memphis, #5 Duke, #13 Missouri, and now #12 Villanova. Monday is an opportunity to push HAVOC! to its limits and take stock in preparation of a run at the Atlantic 10 title. For Coach Smart, it’s always about improving, and the Rams have plenty of work to do: half-court offense, half-court defense, free-throw shooting, and limiting fouls.

Most are looking forward to #9 Virginia, but Monday is the most important game of the Rams’ regular season. It’s the first headline test for HAVOC! 6.0. It’is the likely decider between facing #24 Michigan on Tuesday instead of Oregon–a huge difference maker in strength of schedule. Most importantly, it’s an opportunity for the Rams to pick up a marquee win while shaking off the tough-November monkey on the back of HAVOC!.

The Wildcats were the biggest overachievers of 2013. Despite being picked to finish fourth in the Big East, Villanova went 28-3 in the regular season with wins against Kansas and Iowa, but sputtered out and went 1-2 in the postseason. Only two players from Coach Jay Wright’s 9-man rotation departed, and the Wildcats are primed for another successful campaign.

Monday promises to be all about the guards. After all, Wright is famed for his 4-guard offenses from the mid-2000’s. Villanova has a talented perimeter that will battle play-for-play with Briante Weber, Melvin Johnson, and Treveon Graham. 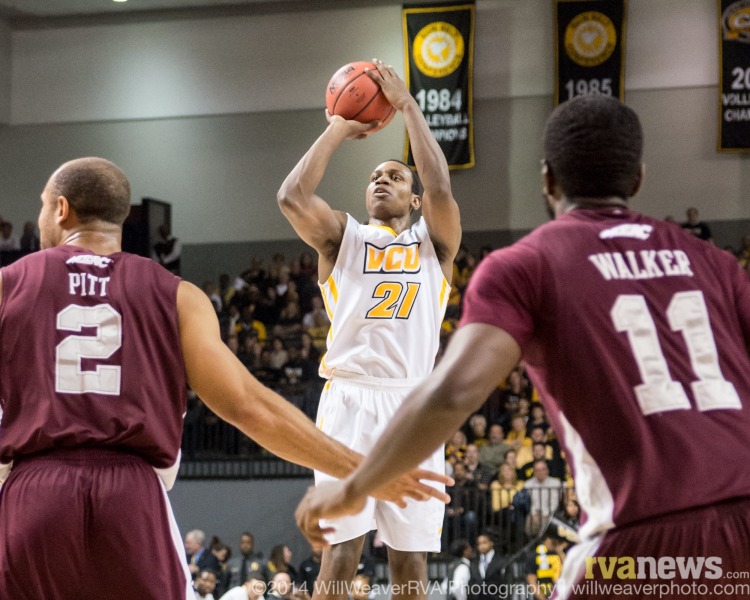 The Wildcats rank 13th in offensive turnover percentage, and their defense forces turnovers at a faster clip than VCU. Their passing and decision making are elite, and they have the ball-handlers to mitigate the panic-effect of HAVOC!. Although, fatigue could make an impact as Villanova has been limited to a tight, seven-man rotation.

Thus far, Villanova hasn’t been as dominant as expected. They beat Lehigh by 11, put a hurt on UMES 81-44, and then snuck by Bucknell in the final minute on Thursday. The one area they have lagged is 3-point shooting (.263)–the scary part: they are capable under-performers. The Wildcats have several players who could find their touch at any moment and make VCU pay from beyond the arc where the Rams have been less than stellar on defense.

Monday is one of the premier games of the Rams’ successful four years since the Final Four. A win will give VCU the opportunity to take the next step in their progression from underdog to perennial top-15 team. A loss will be another November hiccup in an ultimately successful campaign. Either way, Monday promises to be one of the greatest battle-of-the-guards this season and a top-15 matchup worthy of the competition.

If there was a draft to build a team to beat HAVOC!, Ryan Arcidiacono would be high on the list for point guard. After an up-and-down freshman campaign, Arcidiacono exploded onto the scene last season by cutting his turnovers from 96 to 48, becoming an incredibly consistent pillar, and hitting an ice-cold, game-winning 3-pointer against #2 Kansas.

Arcidiacono saw his scoring decrease from second on the team to fourth between his first and second seasons, but his importance and role on the team increased at the same time. He has the steady hand and cool nerves to go toe-to-toe with Briante Weber for 40 minutes–and it should be a battle.

#4 Darrun Hilliard II — The Wildcats need Hilliard to start making shots. After shooting .447 from range in Big East play last season, he’s just 3-of-18 from 3-point land this season. The Rams need to run him off the line and not let him piece together any confidence.

#31 Dylan Ennis — The older brother of Syracuse standout Tyler Ennis, Dylan Ennis had an up-and-down first campaign with the Wilcats last season after transferring in from Rice. He leads Villanova in scoring with 15 PPG. He’s a capable 3-point shooter, and he has plenty of moves on the perimeter.

#22 JayVaughn Pinkston — Pinkston is a talented low-post scorer and an important rebounder. He has the size to play against Treveon Graham, but he’s a departure from the highly mobile fours Coach Wright used to put on the court.

#23 Daniel Ochefu — Exceptional rebounder and shot-blocker. The biggest challenge this season for VCU’s unproven post-defense. Can the Rams keep abusing the offensive glass like maniacs?

#3 Josh Hart — Hart is a classic 6th man. He has the size and speed to guard multiple positions and he can do a little bit of everything. He’s expected to make a big leap this season after his early success last season sputtered out.

KenPom favors Villanova 78-77 with a 53% chance of victory. I think VCU either wins by eight or the Wildcats find their shooting touch and run the Rams out of Brooklyn.