With the exception of Robert Nwankwo, the Towson Tigers looked completely lost on offense Wednesday night as the Virginia Commonwealth University Rams cruised to their 10th straight win, 66-43, in the Stuart C. Sigel Center.

With the exception of Robert Nwankwo, the Towson Tigers looked completely lost on offense Wednesday night as the Virginia Commonwealth University Rams cruised to their 10th straight win, 66-43, in the Stuart C. Sigel Center.

Relive the game through the magic of Twitter! Follow the tweets and pictures from during VCU’s win over Towson.

Senior Bradford Burgess wasted no time on offense, scoring seven of the Rams’ first nine points. Behind one of the best offensive performances of his season, Burgess led the Rams to a comfortable 32-20 halftime lead.

In the second half the Rams allowed a 6-0 Towson run before exploding and pushing their lead to 20 points. As with all VCU blowout leads, the Reco McCarter (dunk tape) chants began. With 3:36 remaining he entered the game. Two minutes later McCarter grabbed a steal at the top of the key, dribbled it coast to coast and slammed down his first dunk as a VCU Ram.

Aside from Towson senior Robert Nwankwo, the Tigers struggled offensively. VCU stole the ball 19 times and forced 28 turnovers. 11 of the 12 Rams to enter the game grabbed at least one steal with Darius Theus grabbing four. Meanwhile the Rams posted their fifth consecutive game with a positive assist to turnover ration. The Rams will always be able to compensate for subpar shooting when they attempt 10+ more shots than their opponent.

While this game will hurt VCU’s RPI, KenPom ranking, and strength of schedule, it was an important opportunity for them to gain confidence before playing their last five regular season games. The Rams will have to travel three times and face four opponents above .500.

Player of the Game

The lone senior on the team, Bradford Burgess has struggled with offensive consistency. Last season he flourished in a supporting role averaging 14.3 PPG and shooting 43.4% from three-point range. This season as defenses have shifted their focus towards him, his numbers have dropped to 12.5 PPG and 34.7%. Wednesday night he performed exactly how the Rams need him to perform if they hope to win against teams like ODU, GMU, and Northern Iowa. Burgess scored 22 points on 8-15 shooting (6-11 from three-point range) while playing solid defense and leading the youthful Rams.

Seven foot-tall sophomore center DJ Haley is always one of the hardest working players on the court. Wednesday night, for the first time, everyone got a glimpse of his true potential. Haley posted a career-high ten points, a career-high three steals, and a career-first double-double.

The highlight of the night came when he stole the ball at the top of the key, dribbled it 60 feet, and slammed it down for two points. After the game, Shaka Smart commented on Haley’s coast to coast action, “I like to let the big dogs eat sometimes.” In the CAA few players have the physical tools to compete with Haley, so double-doubles might be a more common occurance for the Ram’s young center.

VCU looks to make it 11 straight wins and to hold on to first place as they travel to Old Dominion for part 2 of their bitter rivalry.

In an effort to step up their game, the Rowdy Rams made some organized improvements to their heckling. 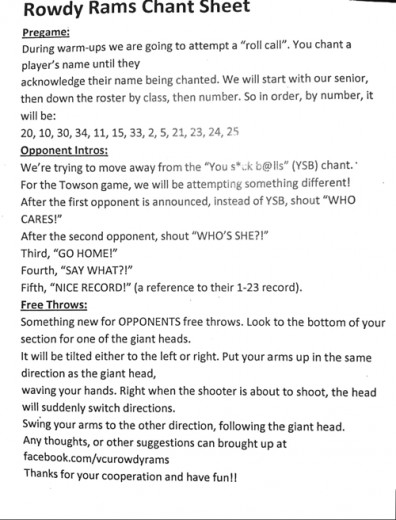