VCU vs. UNC-Greensboro: Guys, it is college basketball season

Basketball season hath fallen! Like a leaf shivering in the cool Autumn wind! Also, the Rams beat the snot out of the UNC-Greensboro Spartans. Here’s to 1-0!

Basketball, it always sneaks up on me — slipped into the middle of the college football season LIKE A THIEF IN THE NIGHT. But! Hark! The squeak of shoes on hardwood, I hear it, no longer in the distance but approaching, quickly, like a thundering (squeaky) locomotive.

Anyway, here I am covering basketball. Basketball is not definitely not my primary sports love language. I am, mostly, a football guy. But the presence of as many as two quality mid-major basketball teams in Richmond was an irresistible siren’s call unto mine sports soul. As you know — or should know, shame on you — Richmond made it into the NCAA tournament last year on the backs of some pretty talented dudes. And VCU, well, they won the CBI tournament. The what? I don’t know either.

Was a CBI Championship considered a successful season for the Rams? I think Larry Sanders would have said there was room for improvement.. But, hey, Sanders is living it up in the NBA (15th pick overall, currently averaging 4 minutes a game with the Bucks).

So here go forth the Rams, opening their regular season with the University of North Carolina Greensboro Spartans. Returning for the Black and Gold is the ever likable Joey Rodriguez and Wake Forest transfer Jamie Skeen. The Rams are also looking for JUCO transfer Toby Veal to make an impact this season. This was the first ever meeting of the VCU and this particular breed of Spartans.

The first half went swimmingly for the Rams — the Spartans never held the lead. At one point they managed to creep within four, but any dreams of valiant first-half comebacks were thwarted by Rodriguez and company. The Rams shot 51% in the first half and 41% beyond the arc. JUCO transfer Toby Veal was the pleasant surprise of the first half. Veal tallied five points, two rebounds, three blocks, and two steals in seven minutes of play. Veal started the game but only played seven minutes.

Brandon Rozzell, who didn’t start, had 13 minutes off of the bench in the first half with nine points (3-4 threes) — he looked like he was having a jolly good time. The Rams ended the half up 11 with the score of 55 – 44.

The second half was more of the same for VCU, who stayed up by double digits for the majority of the time. Joey continued to dominate and eventually set the VCU single-game assist record with 17 assists. He also scored the 100th and 101st point — to chants of “one more point, one more point” — and left the game with 22 points. But, honestly, the real offensive Jedi was Brandon Rozzell who had “a whale of a game.” He “lit up the boards,” as they say, with 23 points — the leading scorer in black and gold. He also “shot lights out” (see what I’m doing here?) shooting 64% from “uptown” and 56% from “downtown.”

Also, I found this in the bathroom. I love college sports: 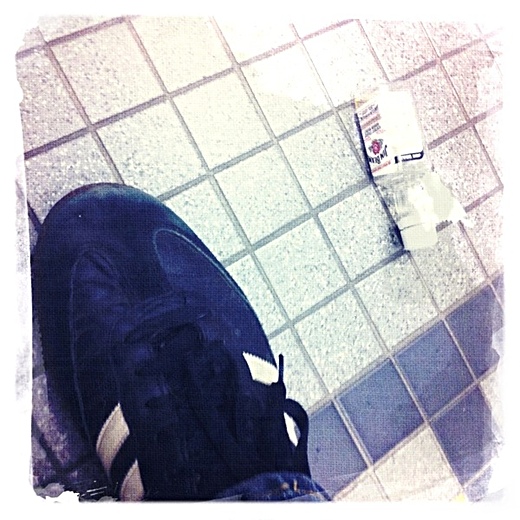