We have an update to the start of the Men’s Elite Road Race on the UR campus! University of Richmond has a handy Richmond 2015 page of its own.

It includes the following map, which, indeed, shows that the start point is directly where I was hoping it would be. Way to read my mind, Spiderlords! 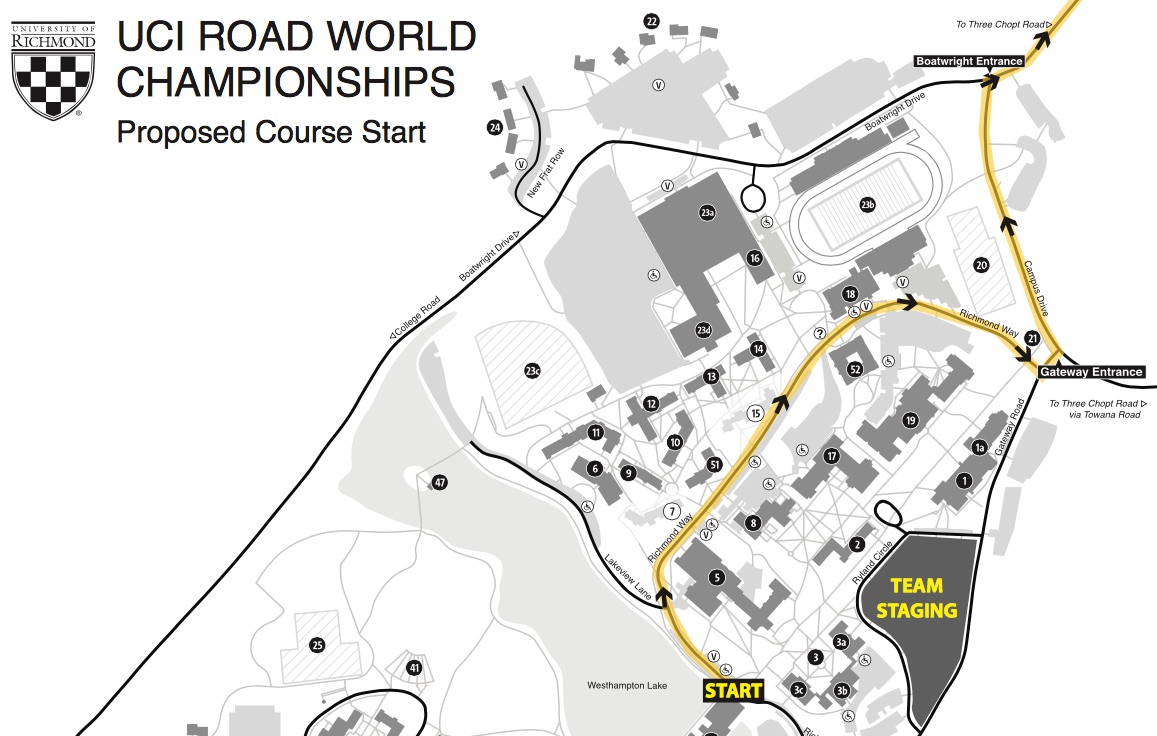 Here’s an FAQ, which doesn’t really answer a whole lot of Qs, but looks like it will be updated later on.

Last week, the folks at Richmond 2015 announced that they would be shifting the race plan a bit so that the Biggest of all the Big Bike Race™ events would begin on University of Richmond campus.

This is the newest in a long list of partnership that Richmond 2015 was able to make with community organizations. No comment on how much money changed hands, whether or not another institution can still get on that partnership list and nab a race starting spot, or whether the course is now fixed or still subject to changes/additions.

UR is, of course, thrilled at the development, which showcases their pretty digs to the world. On September 27th, the final day of the larger event, the Men’s Elite Road Race will start their internal, human engines somewhere on campus and proceed through the university’s winding roads, down Boatwright Drive, out to Three Chopt, through Carytown, left on Boulevard, and onwards to Monument Avenue.

For scenic, pleasant places to view a race–places with a lot of parking that, on a Sunday, have very few restrictions–University of Richmond’s campus would be hard to beat. As a former Spider employee, I would guess that one starting point for the race could be the road next to Tyler Hanes Commons, down the hill from Boatwright Library. (That hill would be a good place to camp, if you get there early).

Or, the parking lot outside the Modlin Center, under the walkway between Modlin and Booker…the dang place is chock full of picturesque starting locations.

Two months before the event, this seemed like a late-in-the-game course addition. I asked Tim Miller, Chief Operating Officer of Richmond 2015–the man behind the deal!–how it came about.

“We had always been looking at potential start venues for the Men’s Elite Road Race on the final Sunday,” he told me. “And UR had been on our radar as a great place to do that. We had initiated dialogue with them some time ago, but as with many things related to this event, it just took time. Including the University of Richmond as the official start location for Sunday’s race presents another great opportunity to showcase more of our region to the world.”

“We see this international event as an outstanding opportunity to welcome not only the Richmond community, but also the world to our beautiful campus,” said Edward L. Ayers, president of University of Richmond. “International education, both in the form of Richmond welcoming students from dozens of international countries and our students studying abroad, is a cornerstone of our liberal arts education.”

In previous coverage of the Big Bike Race™ planning, we mentioned that the collegiate trials last fall were helpful in determining what worked and didn’t work for the course. As a result, a significant portion of the planned Worlds course has shifted. I asked Miller what the process was for changing the course now that the race is looming, and whether or not they had to try the new route in order to vet it.

Says Miller: “We didn’t really change the course, we added to it in order to incorporate the start from the UR campus. The main circuit, which we tested during the collegiate event and previously made some adjustments to, remains the same. Adding the new Official Start location that leads to the main race circuit wasn’t too difficult because the impact on the community will be very brief. We will utilize what is called a rolling enclosure, which is sort of like a quick-moving presidential motorcade.”

For more on the race and its ins, outs, ups, downs, and ripple effects on the community, check out our Big Bike Race™ section.