On Friday Bradford Burgess will put on his VCU jersey one more time to play in the Final Four weekend all-star game. The game can be seen on tape delay Saturday, 1pm on TruTV.

When 6’-4” 200 lb. Bradford Burgess played his first game in Black & Gold his coach was Anthony Grant, his teammates included Eric Maynor and Larry Sanders, and VCU was a strong but unassuming mid major team.

Now 225 lb. Bradford Burgess is 6’-6”, and he leaves behind an unprecedented legacy at VCU. While the Stuart C. Siegel Center is the house that Trani built, Bradford Burgess helped decorate it with three NCAA Tournament banners, a CBI Championship banner, a Final 4 Banner, and a #6 final ranking banner. 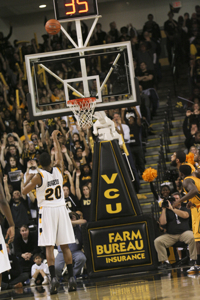 Statistically Bradford Burgess deserves to see his #20 hang from the rafters of the Stuart C. Siegel Center, but Burgess’ contributions to VCU are even more about the man than the numbers. From day one Burgess made an impact at VCU. In December of his freshman year, “Big Shot” earned his name with a go ahead three-pointer against crosstown rival University of Richmond. Last season he drained the layup in overtime against Florida State that sent VCU to the Elite 8. This season Burgess drained countless late game shots including the go ahead 3-pointer with 1:33 remaining against Wichita State that changed the dynamic of the game.

With the early departures of Jay Gavin and Terrance Saintil, Burgess found himself as the lone senior on the 9th youngest team in Division I basketball this season. While his offensive production decreased during his senior season, Burgess’s ability to play as an undersized power forward is paramount to VCU’s ability to play “small ball.” When summer practice started, Burgess was there showing the underclassmen the effort that is required to execute HAVOC. Of course Bradford already had practice working with the younger generation as his brother Jordan Burgess (a 4-star recruit) will join VCU’s roster next season.

Eric Maynor’s jersey was retired on senior night and he deserved that early recognition. For Burgess it could be this fall or it could be several years from now, but he deserves recognition for being VCU’s foundation for success over the past four years. Next time you go into the Siegel Center look around, and whether its the 7,617 full seats or the countless banners, it is impossible to miss the impact “Big Shot” Bradford Burgess has had on Virginia Commonwealth University. 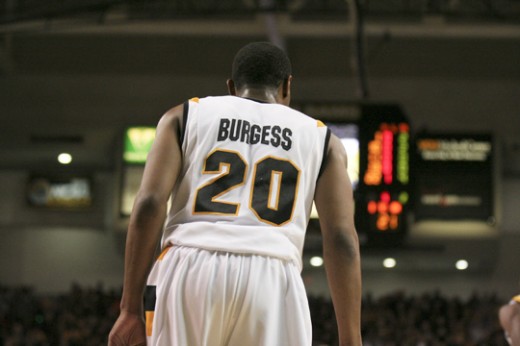