Redskins vs. Vikings: The big let down

Washington squanders a 13-point, 3rd-quarter lead and loses to Minnesota 34-27. The disappointment of losing is huge. Jack Youngblood

The only words that come to me are profanities.

But that’s nothing new for a Redskins fan. We are always spewing vulgarities. Thursday’s crushing loss to the previously 1-7 Vikings was especially hard to take. Usually I’m fairly optimistic, but Thursday night, that shit sucked. Games like that make you feel stupid for liking football in the first place. If I had filed my Redskins recap after the game, it would have been a searing rant of bitter disappointment filled with expletives. It still is, but a couple of days removed, I can put the actions of athletes in it’s proper perspective.

The Redskins are just not a very good team.

On paper they won the game. They had more offensive yards (433-307), ran more plays (77-52), and had the ball longer (36:01-23:59) than the Vikings. Robert Griffin III went 24-37 for 281 yards, three touchdowns, and zero turnovers on top of the 44 yards he had on the ground. Alfred Morris ran the ball 26 times for 139 yards. Pierre Garcon had his second 100-plus-yard game getting 119 yards and a touchdown on seven catches. They were 9-16 on 3rd down. They didn’t turnover the ball over. Despite these impressive stats, the Redskins managed to lose the game.

Of all the losses this year, this one was by far the worst. The Vikings were saddled with injuries and had yet to win a game on American soil. Adrian Peterson is the only reason anybody fears playing Minnesota, but as great as he is, no single man can carry a team. If it was, the Vikings would have won more than a single game this year. And this is exactly why I worried the Redskins would lose against them. It was a game they had to have against a very weak opponent. Sure, they were coming off a short week, but it was a short week after a thrilling overtime victory against a Chargers team that they were picked to lose. The gutsy win was supposed to be the turning point of their season. That’s what all the talking heads said too. The Redskins were going to win against the Vikings.

And that’s when all Redskins fans knew that we were fucked. 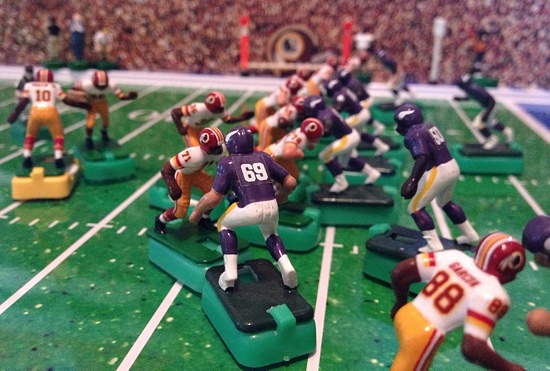 On 2nd-and-1 on the Minnesota 27, Robert Griffin III hands off to Alfred Morris for 13-yard gain in the first quarter.

I should have stopped watching the game when Logan Paulsen dropped the pass in the end zone on the Skins’ opening drive. I just knew that was a bad omen. They drove all the all way down the field to Minnesota 1-yard line. What happens? 1st down, Alfred Morris is held for no gain. 2nd down, an incomplete pass to Darrel Young. 3rd down, Paulsen drops a ball that hits him in the hands. “Fuck!,” I screamed at three girls as they walked into the market, “fuck me in the ass.”

They all looked at me. “Sorry,” I said pointing to the TV, “football.”

I hung around long enough to see Kai Forbath’s field goal before I hurried back to Balliceaux to make sure everything was kosher at the show. Seeing that it was, I scurried back in time to see Adrian Peterson make the score 6-3 on an 18-yard touchdown run up the gut.

“God damn it” I moaned. “Tell me about it,” John said as he rolled his eyes ringing up a customer like he wasn’t there, “We suck.”

During the commercial break, I tried to convince him that it was still early in the game and talked about all the good things they did on their opening field goal drive. It wasn’t without merit either. They ran the ball well.

“If we keep running the ball like that, we’ll be fine. It will open up the passing game too,” I offered as I took a slug of my Smart water.

“I know, but I don’t like the way this game is starting.” 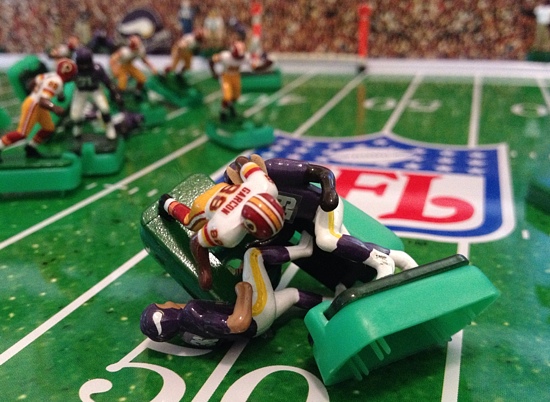 Pierre Garcon’s 17-yard catch on 1st-and-10 put the Redskins on the 50-yard line. Eight plays later, Logan Paulsen scored on a 1-yard pass from Griffin to give the Skins a 24-14 lead over the Vikings going into the half.

My optimism was proved on the Skins’ next drive. Once again, they drove down the field. Griffin hit Leonard Hankerson and Jordon Reed for big gains. This time, they got the touchdown when Griffin connected with Pierre Garcon for the score on 1st-and-10 at the Minnesota eight yard line. At the end of the 1st quarter, the Skins were up 10-7.

“Hail to the Redskins,” I said, high-fiving John walking out the door.

“I just hope they don’t fuck this up” was his response.

I came back a couple of minutes later to see Minnesota get their 2nd touchdown of the game on 2-yard pass from Ponder to Cordarrelle Patterson.

With things going smoothly at the show, I decided that I should watch the rest of the quarter without leaving again. Every time I did, the Vikings scored. A part of me believed that the Skins were down because I wasn’t watching the game. My superstition was given credence when the Skins’ scored 14 points on their next two drives. The first came on a 13-play, 80-yard drive that culminated with an 11-yard scoring strike to Reed. The second came on a quarter ending 11-play, 77-yard drive with a 1-yard pass to Paulsen. As Ponder took a knee to bring the half to a close with the Skins up 24-14, I left Lombardy Market with a guarded optimism.

“Hail to the Redskins.”

“I just hope they don’t fuck this up,” John said as he went back to stock beer. 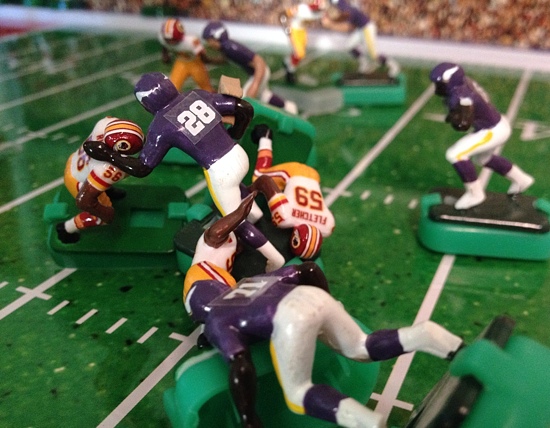 Adrian Peterson’s 9-yard run during the Vikings’ first scoring drive of the game. He finished the day with 70 yards on 20 carries and two touchdowns. In the victory, the 7th pick in the 2007 draft from the University of Oklahoma passed Walter Payton to become the NFL’s fifth all-time rusher with a total of 9,635 rushing yards.

The second half began with the Skins getting another three points from Forbath. They had another long possession end before its time in the red zone, but the score put them up by 13 points. The offense controlled the clock, and the defense got the Vikings off the field. All they had to do was to keep Minnesota from scoring 13 points and they would win the game.

And that they did. The Vikings didn’t score 13 points–they scored 20, and all of them were unanswered. 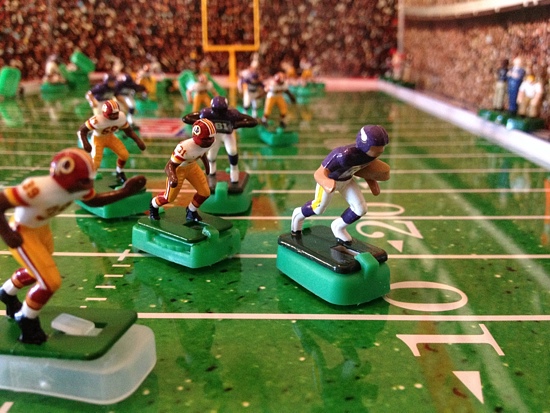 Tight end John Carlson’s touchdown made the score 21-27 Redskins midway through the 3rd quarter. Starting in the absence of Kyle Rudolph, he caught seven passes for 98 yards. The touchdown was his first since 2010.

I grew increasingly despondent watching this happen. I was still hopeful when Ponder hit a wide open John Carlson for 28-yard cake walk into the end zone, but when Adrian Peterson got his 2nd touchdown of the game to tie the score at 28 after a Cullen Loeffler extra point, I was frothing profanities.

“How the fuck do they always fuck themselves. There’s no fucking reason why this fucking game should be tied. I can’t fucking believe this fucking shit.”

“I don’t know why you are surprised,” John said handing change to a tall black dude smiling, “the Skins fucking suck.” 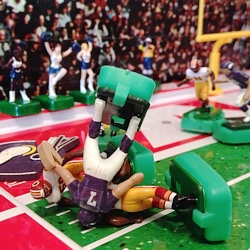 Christian Ponder is stopped on the Redskins 1-yard line by DeAngelo Hall. The quarterback injured his wrist on the play and did not return to the game.

“The Skins are losing?” the guy asks as he turns his head to the TV, “they were up when I left the house.”

“No, the score is tied, but they are playing like shit,” John answers.

“Tell me about it”

And that’s how the game went. John and I exchanged profanities to one another and customers as the Vikings went up by six on two Cullen Loeffler field goals in the 4th quarter. The Skins offense went totally limp in the second half. Nothing worked. It seemed like every time Griffin went back to pass he was hit or sacked. I was getting genuinely pissed. After the second field goal, I left abruptly.

“I can’t watch this shit” 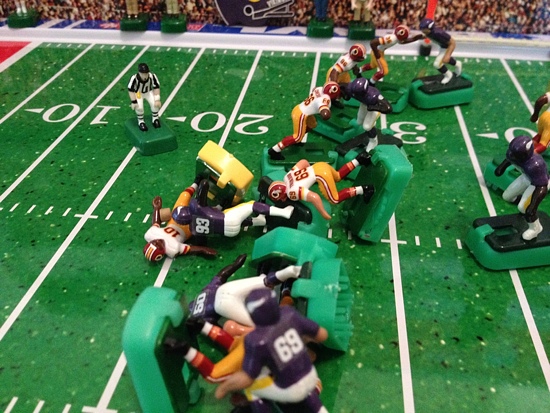 Kelvin Williams sacks Robert Griffin for a 10-yard loss in the 4th quarter.

But I couldn’t stay away. I got my head together and came back for the last drive of the game. The offense moved the ball down the field all the way to the Vikings 8-yard line. After a Roy Helu run to the four, the Vikings inexplicably called a time out. It was a baffling decision. The Skins didn’t have any time outs left and Minnesota head coach Leslie Frazier stops the clock with 32 seconds in the game. Vikings receiver Greg Jennings was pissed. They kept showing him walking the Minnesota sideline like he wanted to kill somebody.

“Thank you Leslie.” I said to John with a fist pump.

But the call proved to be in the Vikings favor. It gave them time to catch their breath, and they kept the Skins out of the end zone to win the game. It was the mirror image of last week’s goal line stand against the Chargers except this time, the Skins were ones being stopped. When Santana Moss caught a pass out of bounds on 4th down, the game was over.

The Vikings had prevailed. 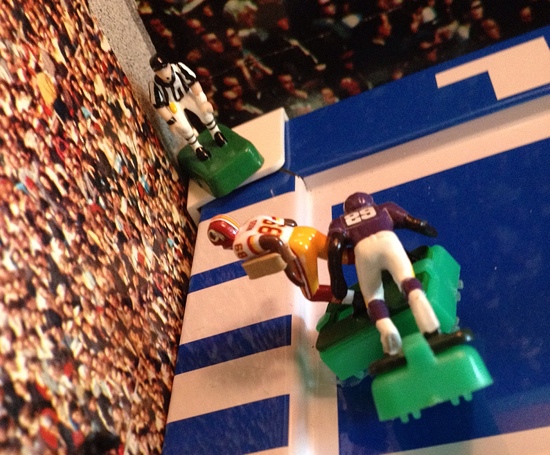 On fourth-and-goal with 32 seconds left, Griffin’s throw to the corner of the end zone was caught by Santana Moss with only one foot in bounds.

I was visibly disgusted when I went back to work. I hurried through my duties and my co-workers did their best to avoid me. It was good they did. I was in a vile mood, and I left as soon as possible.

Now 3-6, the Redskins have the exact same record that they did at this time last year. The NFC remains a battle of who can suck least, but barring another 7-game winning streak, the Skins will once again reign supreme in the bottom of the division they won last year. The Eagles and Cowboys are tied for 1st place with 5-5 records so all is not lost.

The Redskins play the Eagles next week in Philadelphia. A victory against them is of utmost importance if they have any chance of taking the division. It will be a tall order. The Eagles are coming off a victory in Lombeau and are currently the team that sucks least in the division. The Skins have their backs against the wall, but they have proven that they can win when given no other choice.

And at this point in the season, there is no other option.