The fullback’s overtime TD sealed the Redskins’ victory over the Chargers, 30-24. I count him braver who overcomes his desires than him who conquers his enemies; for the hardest victory is over self. Aristotle

Up 24-14 with less than seven minutes left in the game, I was sure the Redskins were going to lose yesterday. All the signs were there. It was the fifth game in a row that they gave up a defensive or special teams touchdown. They had two field goals blocked. Despite this, they had the a two possession lead with time dwindling, but as any Redskin fan will tell you, these are the types of games that the Skins typically lose.

And sure enough, they almost did. 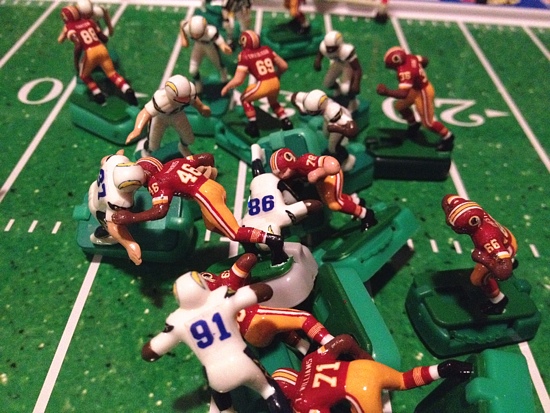 Alfred Morris runs for a 1-yard gain on the Redskins first offensive series of the game. He finished day with 121 yards on 25 carries and a touchdown.

The game started promisingly enough. Starting their first drive of the day on their own 1-yard line, the Skins methodically drove the ball down the field with a selection of run and pass plays that had the Chargers on their heels. Things were looking good. When Robert Griffin connected with Leonard Paulson for a first down on 3rd-and-6 that put the Skins on the Chargers 14-yard line, it looked like a touchdown was in the team’s very near future. And then–as has been the case when the Redskins have been on the cusp of six this year–the drive stalled, and it was up to Kai Forbath to put points on the board. As they lined up for the kick, I went to the kitchen to get more coffee. I came back just in time to see Lawrence Guy block the 25-yard attempt.

Fuck me. It’s going to be that type of game, isn’t it? My phone started blowing up with profanities.

The Chargers got the ball, but had to punt it way. Punter Mike Scifres once again pinned the Redskins deep in their own territory. After a false start penalty on full back Darrel Young, the Chargers scored the first points of the game. 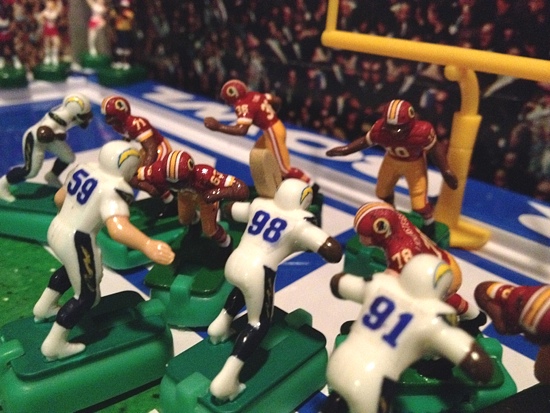 Chargers defensive end Sean Lissemore intercepts a tipped pass in the end zone to put the Chargers up 6-0 early in the second quarter.

Griffin went back to pass and Chargers lineman Lawrence Guy got his hand up causing the ball to flutter around fellow defensive end Sean Lissemore’s head before he could get his hands on it. When he did, the Chargers had their first lead of the game. I looked over at the phone as it chimed the arrival of more obscenities. I reached over and turned it off. 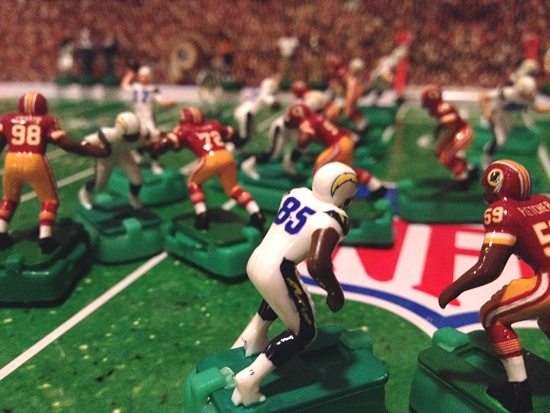 Chargers quarterback Phillip Rivers connects with tight end Antonio Gates for an 8-yard gain on San Diego’s scoring drive before the end of the 1st half.

The Redskins tied the game on an Alfred Morris 5-yard run later in the quarter, but with 5:25 left in the half, the defense gave up an 11-play, 85-yard touchdown drive. The hurry-up tempo allowed the Chargers to nickel-and-dime themselves down the field with ease. When Eddie Royal scored on a well-executed wide receiver screen to take the lead 13-7, you could almost feel the crowd deflate. But it could have been worse. If wide receiver Vincent Brown runs the right route on San Diego’s previous drive, chances are they would have scored on that drive too. Thankfully, E.J. Biggers can catch balls thrown directly at him or Alfred Morris never gets in the end zone in the 2nd quarter. They were lucky to be only down by seven going into halftime.

Unlike other games this year, the Redskins took advantage of their good fortune. 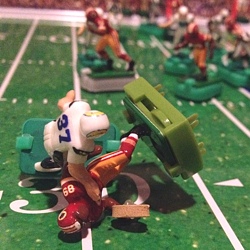 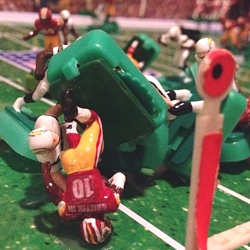 Quarterback Robert Griffin lands on his head after a 10-yard run to get the first down in the 3rd quarter.

Washington opened the second half with an impressive 9-play, 74-yard touchdown drive. It was done with a steady diet of Alfred Morris punctuated with passes to Pierre Garcon and Santana Moss. The defense held San Diego on their next possession, and the Redskins scored again, chewing up nearly eight minutes on an 11-play, 79-yard drive that put them ahead 21-14.

Griffin’s 10-yard run-and-leap on 3rd-and-9 for a first down late in the third quarter set up the go-ahead score. It was a spectacular play and one the Skins’ needed in a must-win game, but if he continues to take those types of hits, it won’t be too long before Kirk Cousins is lining up behind center for the Skins. Plays like that are why the team drafted Griffin so no one can act surprised when the man does what he was brought in to do. Still, every time Kyle Shanahan called an option play (three times), it seemed like Griffin was getting needlessly abused. 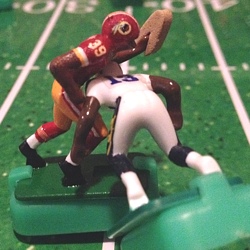 David Amerson intercepts Phillip Rivers with 10:25 left in the game.

The defense was keeping Rivers and the Chargers’ offense off the field, and Griffin was eating up clock with long scoring drives.

Just when I thought it couldn’t get any better, it did when rookie David Amerson stepped in front of a Phillip Rivers pass intended for Keenan Allen to get his second interception of the year. Each week, the second round draft pick continues to improve and make important plays. This lead to Kai Forbath’s 47-yard field goal that put the Skins up 24-10 with 6:59 left in regulation.

It was then that I started worrying that they would fuck it up. As the game went on, I had good reason to worry. 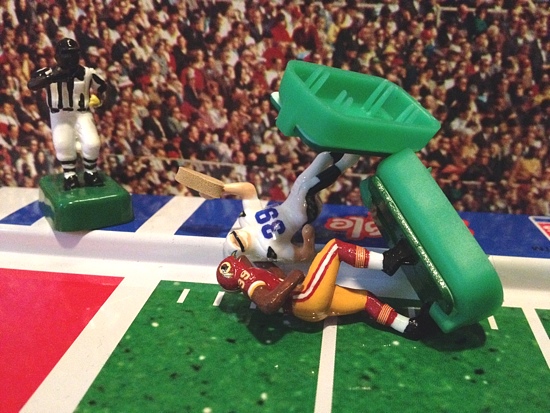 I wonder why the Redskins make everything so hard on themselves and so easy for the other team. And that’s exactly what they did. They let the Chargers get seven in under three minutes. And then, after the Redskins offense couldn’t hold onto the ball to seal the victory, San Diego got the ball with 2:10 left in the game and two timeouts. On 4th-and-2, Keenan Allen was left wide open, and he made the catch to keep the drive alive. On the next couple plays, Rivers moved the Chargers not only into field goal range, but into TD range with time and timeouts to spare. At this point, I’m pacing the room, a mixture of hope and dread. And when Rivers connected with David Woodhead for what appeared to be a touchdown, I fell back in my seat with a thud, disgusted.

Then, like an angel answering my profane prayer, the replay booth overturned the touchdown. There still was hope, but with three shots at the end zone from the Redskins 1-yard line, I wondered if they should just let the Chargers’ score to have any chance of winning the game. There was no way they were going to keep San Diego from getting the touchdown so they should let ‘em score, get the ball back, and hope for a miracle. I was certain the Redskins couldn’t stop the Chargers from getting the touchdown.

But that’s what they did. 1st down, nothing. Second down, incomplete pass. Third down, incomplete pass. I couldn’t believe it. The Skins held them. The Chargers couldn’t get the six and had to settle for a field goal by former Redskins kicker Nick Novak to send the game into overtime with the score tied at 24. They would never touch the ball again. After the Redskins won the coin toss, the offense drove 63 yards and Darrel Young scored his third TD of the day to win the game. 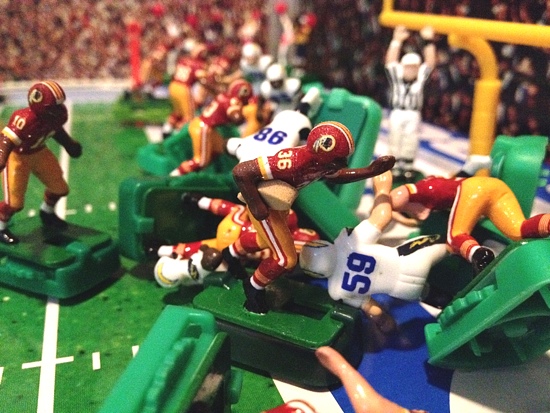 Darrel Young’s 4-yard touchdown capped a 10-play drive that sealed the 30-24 victory for Washington over San Diego in overtime.

At 3-5, the Redskins keep themselves in playoff contention in the NFC East. Punt and kick off coverage has improved, but the Skins’ special teams had two field goals blocked. Those are the types of blunders that lose games. Dating to last season, the once perfect Forbath has now made just five of his last 10 field goal attempts. If they want to continue winning, they have to first stop beating themselves.

The team was excellent on third down yesterday. They converted 12-of-17 third downs, including all seven on their final three touchdown drives. Pierre Garcon had a monster game, and he was a big reason why the Skins won, making tough catches in clutch situations. Jordon Reed had a good first half, but kind of disappeared in the second. He finished the day with three catches for 37 yards and a run for 18. Griffin didn’t throw a touchdown, but he went 23-of-32 for 291 yards and threw the ball well after an early fluke interception. The combination of Alfred Morris, Roy Helu Jr, and, now, Darrel Young in the run game is critical to the team’s continued success.

The defense bent plenty (giving up 410 yards in total offense), but held firm when it mattered most. Dave Amerson’s interception and tackle on the goal line were the difference in the game. With DeAngelo Hall having an all-pro year and Brandon Merriweather back from suspension, the defensive backfield is playing their best ball of the year and is still improving.

The Redskins are on a short week, playing this Thursday in Minnesota against the Vikings who are coming off a tough loss to the 5-4 Cowboys. If they can keep Adrian Peterson under 150 yards and can manage to get that much or more of their own on the ground, they should come out of Minnesota with a victory. But with the Redskins, you never know.