It took a dominant final three minutes, but #21 Virginia Commonwealth University found revenge on senior night as they topped University of Richmond 93-82 in the Siegel Center last night. It took a dominant final three minutes, but #21 Virginia Commonwealth University found revenge on senior night as they topped University of Richmond 93-82 in the Siegel Center Wednesday night.

The Rowdy Rams also won the Naismith Student Section of the Year!

For 36 minutes, Richmond looked poised to spoil the ranked Rams’ evening for a second time this season. In the January meeting, Richmond ground it out in a 71 possession overtime game with offensive efficiency.

Wednesday was entirely different as both teams raced up and down the court cramming what took 45 minutes last time into 40 minutes. The Spiders were still extremely efficient on offense, but the cumulative effects of the press finally took their toll in the final minutes.

Cedrick Lindsay, Kendall Anthony, and Greg Robbins abused the full court pressure in different ways, especially with foul plagued Briante Weber limited to six minutes. Lindsay was slow and methodical drawing in the traps and making key passes at the last second. 5-foot-8 Anthony blew past the defense with his speed often times finding himself on the favorable side of four trailing VCU defenders. Robbins was less graceful but very effective and his versatility was the glue between Richmond’s experienced backcourt and young front court. 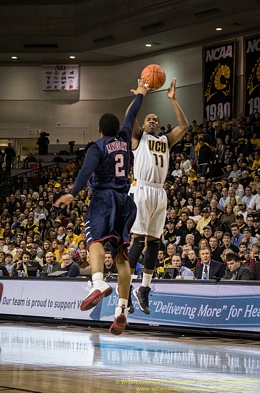 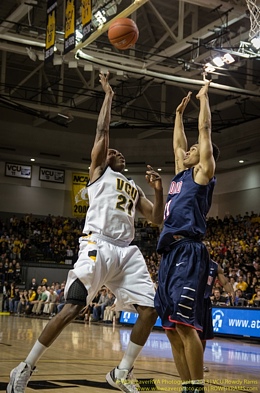 VCU and Richmond traded momentum almost as quickly as they traded the lead, and the lead bounced back and forth frequently. The Rams drew first blood, but Richmond led by as many as nine points before a Rob Brandenberg last second 3-pointer gave VCU a 43-41 halftime lead. The result was highly entertaining, but it also left fans with an uneasy feeling compared to Saturday’s 84-52 beatdown of #20 Butler.

“It’s great, this is college basketball. We played one at our place on a Thursday night, this was a Wednesday night. There couldn’t have been two better atmospheres that we’ve played in. The crowd is into it. There’s more talk about it.”

Coach Smart again suggested that Richmond has replaced ODU and Mooney pushed the rivalry as well.

“From a fan standpoint, a city of Richmond standpoint, I hope we play again in Brooklyn.” 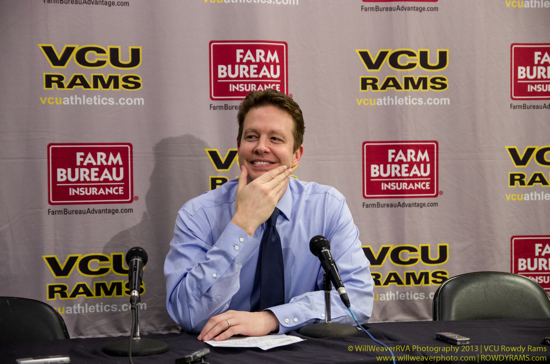 Lindsay, Anthony, and Robbins are the reason Coach Smart & Co. will dread a Brooklyn rematch if it happens. Making things tougher on HAVOC!, when the three of them weren’t finding open three point shooters in the corner or cutting big men in the paint, the Spiders were abusing VCU on the offensive glass. Freshman Terry Allen was particularly effective scoring 13 points on 6-8 shooting with 3 offensive rebounds. His freshman partner in crime Alonzo Nelson-Ododa finished with 11 points on 5-5 shooting. Nelson-Ododa was a perfect 3-3 in the January game.

The press has its weaknesses and Richmond did a great job of exploiting them this season. After watching Richmond’s triumvirate of ball handlers play with poise, coach Smart admitted to thinking about calling off the press, but he decided against it.

“We turned them over just enough. We got 15 turnovers which is kind of our magic number, we want to force a lot more than that. You hope that there is a cumulative effect to the press so that over time at the end of the game it wears people down and it affects their legs and their shot.”

With 3:13 remaining in the game, Terry Allen drained a 3-pointer to tie the game at 79-79, but VCU clearly had more gas left in the tank than Richmond. Treveon Graham responded with a layup. Juvonte Reddic followed it up with an emphatic dunk, and a Darius Theus steal set up Reddic for two more points. In the blink of an eye, the game was over for Richmond and VCU would shoot free-throws the rest of the way to cap off a 14-3 run. Senior night was safe, VCU found revenge, and most importantly the Rams are again tied for 1st place in the Atlantic 10 with St. Louis. 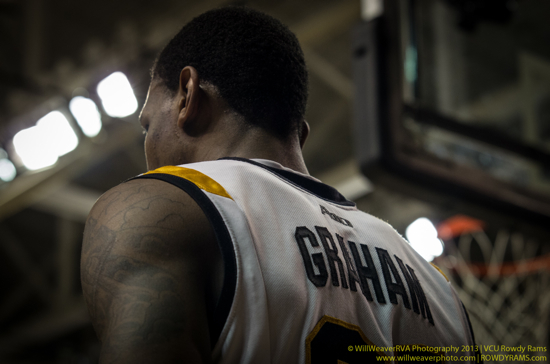 One of the most capable scorers in VCU history, Treveon Graham was due for an efficient double digit outing after shooting just 16-44 (.364) from the field over his last four games. He only had six points at halftime before adding on fifteen more after the break. When VCU needed scores in the second half, Graham simply “freight trained” his way into the lane which ended in buckets, free throws, or a combination of the two. He finished the night 8-11 from the field for a season high .727 shooting percentage.

Tonight was senior night, but Darius Theus, Troy Daniels, and David Hinton have more (hopefully many) wins left in their careers. For now, enjoy this:

VCU plays their final regular season game of the season at Temple on Sunday at noon on CBS (remember to move your clocks forward an hour!). St. Louis lost in overtime to Xavier on Wednesday, so this weekend is extremely important. A VCU win and a La Salle win gives VCU the #1 seed and an outright A-10 regular season title. A VCU win and a St. Louis win gives VCU a #2 seed and a share of the A-10 title.