Belmont is a talented but unbalanced team, and it showed on Saturday night. The Bruins started strong behind the scoring abilities of Ian Clark. The first 10 minutes was a heavyweight fight and the score was tied at–15 before HAVOC! happened. Suddenly, Belmont couldn’t handle VCU’s full court pressure and the Rams started forcing turnovers and scoring in transition.

In the final minute of the first half, Melvin Johnson grabbed a steal and scored on the fast break. Juvonte Reddic grabbed a steal on the following possession and slammed down an emphatic dunk. Belmont called a timeout, but VCU was ready and forced a turnover on the following play that led to two Rob Brandenberg free-throws capping off a 19-3 run. Belmont responded by hitting a half court 3-pointer at the buzzer. The Bruins and Rams were a combined 0-16 from 3-point range in the first 19:59 of the game, but things changed in the second half.

The Bruins exited the locker room with a stronger plan to handle VCU’s pressure defense. The tempo changed as VCU struggled to force turnovers and Belmont started getting open looks in transition. Over a four and half minute stretch, Belmont scored on nine straight possessions to cut the lead to only six points. The Rams couldn’t get stops, and the Bruins were scoring on command.

For every basket the Bruins made down the stretch, Rob Brandenberg responded. He scored 8 points in the final 6:17 including a crucial 3-pointer with 3:16 remaining to push the Ram’s lead to 8. Ian Clark finished the night with 24 points on perfect 10-10 shooting, but the Rams dribbled out the clock in their fifth double digit victory of the season.

VCU shot terribly from 3-point range but beat one of the top two teams in the Ohio Valley Conference by winning the rebounding battle 34-27 and the turnover battle 24-15. 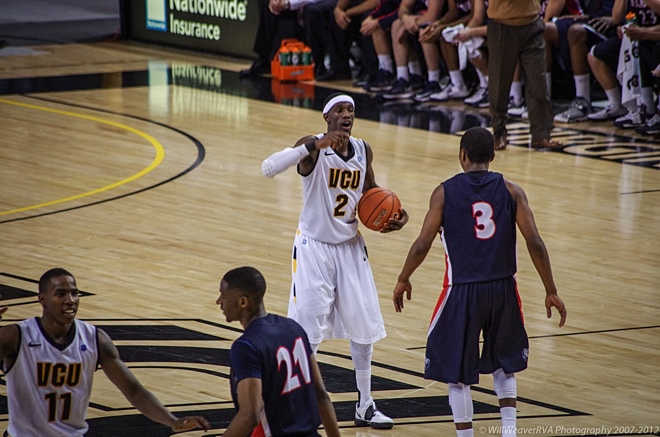 After injuring his knee against Stetson, Darius Theus was in street clothes for Saturday’s game. Point guard play was an area of concern for the Rams against the turnover minded Bruins. Sophomore Teddy Okereafor earned his first career start, but it didn’t take long for Briante Weber to replace him. Weber played with poise and finished the night with a Weber style balanced stat line: 7PTS, 3REB, 3AST, 2STL, 1BLK, and 2TO.

After the game, Coach Smart praised his play by saying, “When you put #2 in the game, things change” and “I thought he was the biggest key to us winning.”

Smart also added, “I have a feeling [Theus] will make an appearance down in Norfolk.” 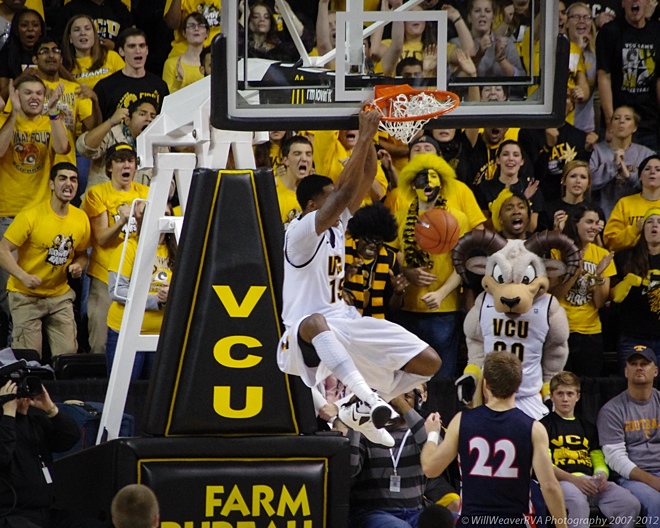 The Rams get their energy from their backcourt, but Juvonte Reddic and Treveon Graham have established themselves as the core of this team. Reddic showed off all of his moves by scoring on long jump shots, by driving to the basket, by scoring in transition and on put-backs. Graham also put on a clinic: scoring a team-leading 19 points, and he was the only Ram to hit multiple 3-points (2-5) on the night.

Belmont is one of the worst defensive rebounding teams in the nation, and #15 & #21 capitalized by grabbing a combined 10 offensive rebounds. The Rams finished the night with 17 second-chance points.

VCU travels to Norfolk to take on rival Old Dominion on Friday night at 9:00 PM. The Monarchs are an abysmal 1-6 and are in the midst of a five-game losing streak.