After playing a brilliant second half against Massachusetts, VCU cruised past George Washington Saturday night, 84-57, in the Stuart C. Siegel Center. After playing a brilliant second half against Massachusetts, Virginia Commonwealth University cruised past George Washington Saturday night, 84-57, in the Stuart C. Siegel Center.

Less than 48 hours removed from dominating the Massachusetts Minutemen, VCU wasted no time taking care of their second revolutionary force of the week. Only 60 seconds into the game, Darius Theus grabbed a steal and found Juvonte Reddic for the one handed alley-oop.

With Larry Sanders (Milwaukee Bucks) and Eric Maynor (Oklahoma City Thunder) watching court side, Reddic didn’t slow down. He connected on his first seven shot attempts and finished the night 11-13 from the field. With GW’s defense focused on #15, the Rams were primed to attack from the perimeter.

Rob Brandenberg, Treveon Graham, and Troy Daniels all got hot from range and a 16-14 game suddenly became a 42-24 blowout at halftime. With VCU making shots, they had the opportunity to set up their full court pressure. The result: turnovers–and plenty of them. VCU finished the night forcing 25 turnovers, their highest margin since their Atlantic-10 opener against Dayton.

In the second half, freshman Melvin Johnson played with the same spark as Thursday when he scored a career-high 18 points. His 3-pointers are finally starting to fall, and his midrange floater is automatic. After the game when asked if he has a name for the shot he humorously responded, “Yeah, I call it the Melvin.” 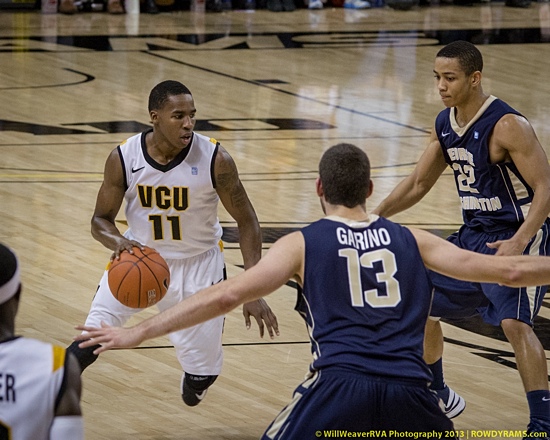 After the game, when talking about his night, Reddic said, “I was in a good mood.” Johnson clearly shared his enthusiasm, and with good reason. The Rams finished both the first and second halves on dominant 21-6 runs.

VCU entered the halfway point of the A10 at 6-2, but their best basketball seemed like a distant memory as their 3-point shooting digressed and their defensive effective field goal percentage skyrocket over 50%. Since the halfway point, the Rams won a tough road game over Charlotte before dominating Massachusetts and George Washington.

Entering a brutal final five game stretch, the Rams could be peaking at the right time. With the conference title, the conference tournament, and a potential NCAA Tournament bid all on the horizon, the Rams will need to play their best basketball over the coming month. 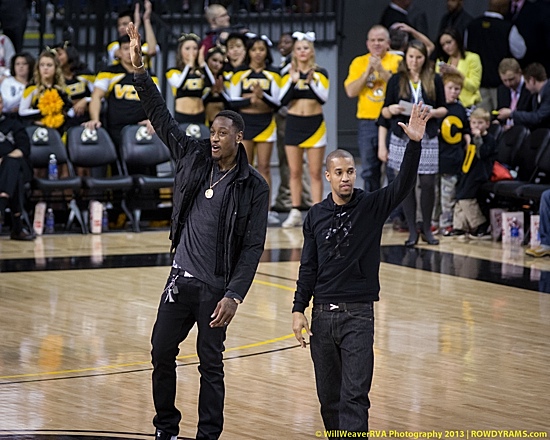 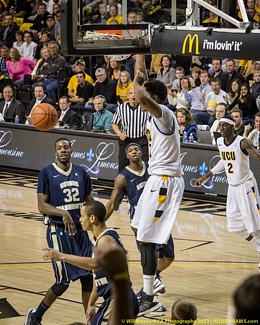 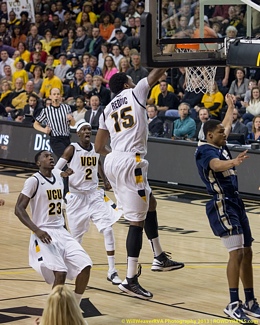 Reddic’s career highlight tape could be made entirely from this game. He had five dominant dunks, two of which were Sports Center Top-10 worthy alley-oops (one made the list at #9). Defensively, GW had no answer for the junior as he scored on command in the paint.

Reddic picked up two early fouls against UMASS and was forced to sit for a few minutes. Against GW, Reddic impressively didn’t pick up a foul. The drop-off between #15 and VCU’s front court subs is dramatic, and his ability to stay on the court and play great basketball will be invaluable against teams like St. Louis and Butler.

VCU (9-2) visits St. Louis (8-2) on Tuesday at 9:00 PM. The game has huge conference implications as both teams fight for the coveted Atlantic-10 title.