After finishing 1-2 in the Puerto Rico Tip-Off, Virginia Commonwealth University returned to the Stuart C. Siegel Center while returning to their winning ways by beating Northeastern 79-66. After finishing 1-2 in the Puerto Rico Tip-Off, Virginia Commonwealth University returned to the Stuart C. Siegel Center while returning to their winning ways by beating Northeastern 79-66.

Terrance Shannon was attending to a family matter. Treveon Graham couldn’t start because he missed two practices with a minor injury. The Rams started Mo Alie-Cox and Melvin Johnson in their places, but the lineups were effective.

Northeastern was the first CAA team to visit the Siegel Center since the Rams headed to the A-10, but the game was not a classic CAA rock fight. Both teams were effective early and often from 2-point range and finished above 50%. While both teams were successful inside the arc, they both struggled from range.

The Rams started the game 0 of 8 from 3-point range. With 57.3 seconds remaining in the first half, Melvin Johnson finally got a 3-pointer to fall but not until it hit the rim and bounced 3 feet in the air. The shot started an 8-0 run in 58 seconds for the Rams. On the next possession Rob Brandenberg stole the ball and jammed it. Then Mo Alie-Cox blocked a shot which eventually ended up with a Treveon Graham and-1 to end the half.

Coach Coen summed it up after the game, “I thought we played 33 to 35 good minutes of basketball. Unfortunately, we went on one minute spurts, maybe three possessions in a row where we didn’t execute on either end of the floor.”

The Rams looked normal at times, but a few streaks ultimately separated them. The second half reached a climactic peak when Treveon Graham found Briante Weber for a “Butler dunk” on the fast break. Game. Set. Highlight reel. Match. 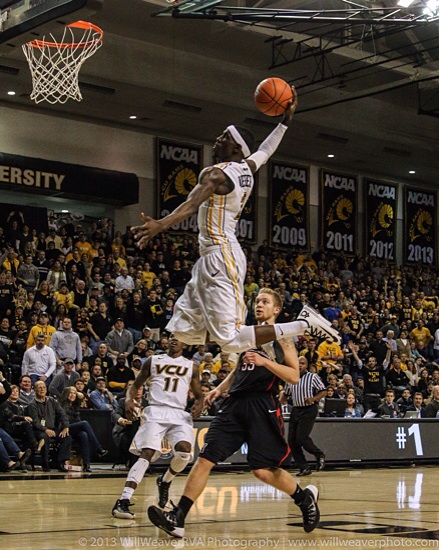 He’s the best guy around the rim, protecting the basket that we’ve had since Larry Sanders. He’s not on Larry’s level yet, but for a freshman to block five shots and he changed a lot of other shots which is big. Coach Smart

Mo Alie-Cox finished with 7 points, 3 rebounds, 5 blocks, and two steals. He played solid defense on Scott Eatherton, Northeastern’s best player, and he jammed a couple of slams off of feeds from Briante Weber. His role started changing in Puerto Rico, but Alie-Cox undoubtedly the played the best game of his career on Friday night.

Treveon the “Freight Train” Graham is known for quietly leading the team in scoring while Juvonte Reddic is typically less bashful. Friday they switched roles and Reddic finished with a quiet 17 and 10. Reddic has 18 double-doubles which ranked seventh all-time at VCU.

Johnson who picked up his first career start didn’t start the second half, but he did finish with a crafty 13 points. The bench was a little shorter, the lineups and rotations were a little different, but the results were the same: HAVOC! was wreaked, the Siegel Center was sold out for the 38th straight time, and VCU won another home game.

Treveon Graham had a tough weekend in Puerto Rico. He finished 9 of 29 from the field and 4 of 17 from 3-point range during VCU’s 1-2 finish in the Puerto Rico Tip-Off. He responded Friday by finishing 2 points short of his career-high on one of the most efficient shooting nights of his entire career. Treveon Graham looks to be back to doing what he does best: scoring from three feet and three-point range.

The Rams visit Belmont Sunday at 5:00 Pm. The game will be on Comcast SportNet and CBS 6.3. Belmont beat UNC in Chapel Hill on November 17th.