It took 3:26 for VCU to jump out to a 16-3 lead. The Rams forced turnovers on demand and scored efficiently in batches, but at times they were sloppy: coughing up 15 turnovers and committing 20 fouls. The game was a track meet totaling 177 possessions, but VCU never took their foot off the pedal.

The undersized Knights had no answer for the physical force of Juvonte Reddic. He finished the night with 22 points on 10-18 shooting, 11 rebounds, five steals, and two blocks. Reddic has always had a midrange jumper, but in the second half, he hit the first 3-pointer of his career. A developed 3-point game could take the dynamic 6-foot-9 forward to another level on offense.

The Rams boasted a 47-30 lead at halftime, and the second half saw plenty of bench minutes for VCU. Melvin Johnson impressed again scoring nine points, and VCU got some quality reserve minutes from DJ Haley, Jarred Guest, and Justin Tuoyo. The depth will be a huge asset moving forward, but Coach Smart’s rotations will likely change in January as VCU faces more competitive opponents.

While most of VCU’s starters played roughly 20 minutes, senior Troy Daniels played a team high 31 minutes. After playing 28.5 minutes solid minutes, Troy Daniels caught fire at the end of the game. He went 4-4 from 3-point range in the final 3 minutes of the game, setting the VCU single game record for made 3-pointers which prompted, “Troy! Troy! Troy!” chants from the audience.

Fairleigh Dickinson’s Kinu Rochford played all 40 minutes en route to a 30-point and 16-rebound performance. While the Knights were outmatched at every position, Rochford played with poise despite being totally outsized by VCU’s front court. 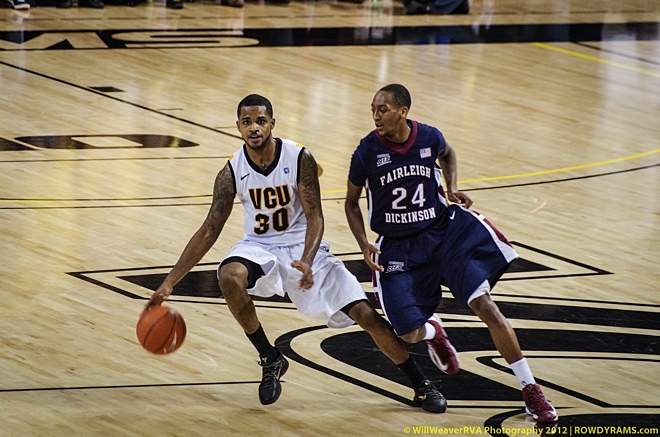 Given Daniels’s skill and willingness to shoot the ball, it was only a matter of time before the VCU 3-point record fell. After tying B.A. Walker’s record of eight on December 7th against Old Dominion and hitting seven against Longwood on December 21st, Troy Daniels wrapped up his greatest month of basketball with a school record nine 3-pointers.

While the performance was memorable, one has to wonder why Troy Daniels, a starter, was on the court shooting threes with under 3 minutes with a 27-point lead.

Daniels now has 177 career 3-pointers. He passed Jamal Shuler and and Chris Brower Saturday afternoon and he is now five 3s short of Bo Jones at 5th place for VCU. Last season Daniels set the VCU single season record for 3-pointers. Through 13 games last season he had 31 3-pointers, this season he has 50.