The Richmond Flying Squirrels just split their first 4 game series 1-3 with the hated Bowie Baysox. Next up for the Squirrels is a 3-game series at the division-leading Altoona Curve (3-1).

Next up for the Squirrels is a 3-game series at the division-leading Altoona Curve (3-1), the first set of 22 games the two squads will play this season. Monday’s game starts at 6:30PM and will likely feature the lefties Craig Clark vs Justin Wilson.

The Richmond Flying Squirrels just split their first 4 game series 1-3 with the hated Bowie Baysox. This initial series for the new team was full of club firsts: pitcher Clayon Tanner picked up the first win in franchise history, outfielder Thomas Neal’s collected the Squirrel’s first hit with a double off Bowie’s Zach Britton, Jackson Williams was the first Squirrel to be hit by a pitch, and on and on and on.

This series could’ve easily gone the other way. The games at Bowie were all close, and the first 3 were tied after five innings. Bowie’s bullpen made the difference through the first 3 games, allowing 6 runs in 11.2 innings (compared to the 8 runs in 8.2 innings given up by the Flying Squirrels relievers) . On a positive note, the Flying Squirrels starting pitchers have given up just 17 hits across 19 1/3 innings. The Squirrels stranded close to 40 baserunners over the 4 games, certainly a factor in dropping the 1st and 3rd games of the series.

The Squirrels stay on the road for a 3 game series at the Altoona Curve. Though they made the playoffs in 2003-2005, the last few years haven’t been winning seasons for the Curve. Their parent club the Pittsburgh Pirates have not had a winning season since 1992 – at 17 years, the longest in any of the country’s four major professional sports leagues — and this seems to have rubbed off on the local team. In a sign that maybe this year will be different, Altoona has kicked off 2010 taking 3 out 4 from the Harrisburg Senators, outscoring them 12 to 2 in the first 3 games. Is Altoona that good or is Harrisburg just having a bad week?

While Altoona is the smallest of the Eastern League cities, like Bowie and the Orioles, Altoona has the benefit of at least being in the same state as their parent club (even if it is a 2 hour drive). Altoona’s population is just under 50,000, making it the ninth most populous city in Pennsylvania (after Philadelphia, Pittsburgh, Allentown, Erie, Reading, Scranton, Bethlehem, Lancaster and Harrisburg). Richmond is a big boy in the Eastern League, for sure, but we’re a long way from San Francisco. 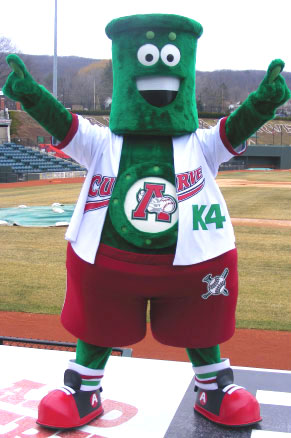 The Curve mascot is the Altoona Steamer, a green furry model of a steam engine that was manufactured at Altoona’s local railyards back in the day. They’ve also added a 2nd mascot, the less-of-an-anthropomorphic-stretch Diesel Dawg (“a tribute to the diesel engines”).

A couple of last things that you might need to know about the city of Altoona: