It’s early to reach any conclusions, but VCU has the talent and depth to have a very successful season. It’s early to start reaching conclusions, but Virginia Commonwealth University’s 92-54 win over California (Pa.) in the Stuart C. Siegel Center helped confirm the suspicion that VCU has the talent and depth to be very successful this season. 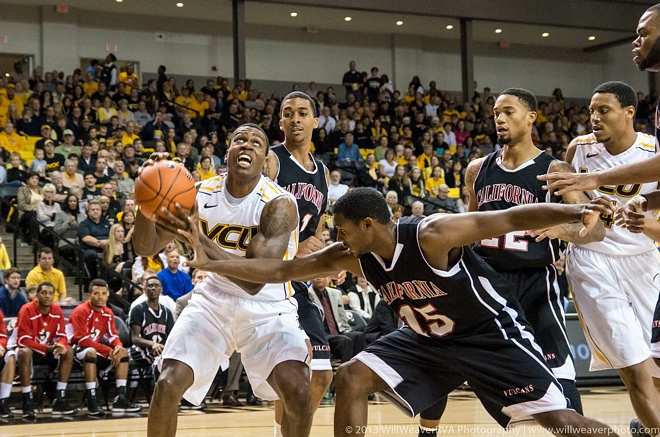 “We weren’t as aggressive as we need to be.”Briante Weber

VCU didn’t look like they were suffering from lack of aggression. It took 4:37 for the Vulcans to score their first points and VCU poured in 28 points in the first 10:02. The night was dominated by a rapid fire rotations by Coach Smart, HAVOC!, and a balanced offense. VCU played a surprising amount of zone defense and every player other than Jarred Guest, who sat out as a precaution as he recovers from a dislocated ankle, saw minutes.

The Vulcans never established a half court offense, they struggled with turnovers, and they could not stop VCU’s multifaceted and skilled offense. Every time a player cooled off, another player heated up. Doug Brooks scored on several hustle plays. Juvonte Reddic went to work in the post and showed why he is an A-10 player of the year candidate. Melvin Johnson started filling the massive void left behind the 3-point line by Troy Daniels. 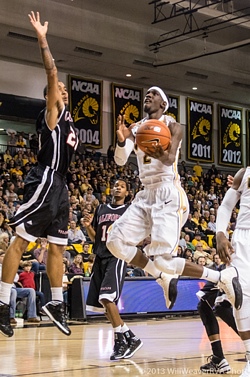 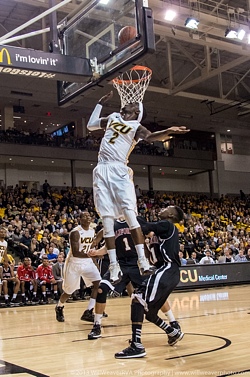 Eric Maynor. Joey Rodriguez. Darius Theus. Briante Weber. Great point guards have been a key to VCU’s success over the past decade, and some have had their doubts about Briante Weber. The junior steal machine finished with 8 points, 9 assists, 3 turnovers, 3 rebounds, and 2 steals. At times, he played with poise but he made a few mistakes at the end of the first half.

Briante Weber, who is already Mr. HAVOC!, has the potential to be Mr. Poise, Coach Smart’s other buzz-word. Weber’s athleticism and energy are legendary, but he needs to settle down and get the ball to VCU’s many skilled scorers.

“To be honest he’s played better than that in practice…He had a really good assist-to-turnover ratio last year. Tonight it ended being three to one, it’s just the turnovers ended up being loud. He just needs to understand his role on our team is to run the team and to keep us solid on both ends of the floors”Shaka Smart

Loudest moment: 108 decibels. Treveon Graham stole the ball, gave it to Juvonte Reddic and Reddic beautifully passed the ball back to Graham for a lay-up.
Coach Smart’s Jacket: 19:15 remaining in the first half. 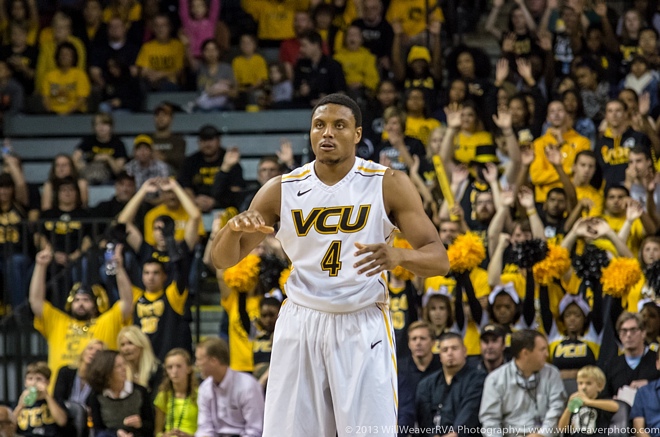 VCU only returns six players from last season, but Coach Smart returns a really talented and experienced core. What makes the 2013-14 Rams so exciting are the new faces.

Terrance Shannon adds an experienced leader and valuable front court depth. He is enthusiastic and is extremely vocal on defense. Mo Alie-Cox adds an incredibly unique athleticism that will present matchup problems throughout his career. JeQuan Lewis is the type of scoring point guard not seen at VCU since Joey Rodriguez. Jordan Burgess is a Swiss Army Knife with the tools to do-it-all at the 2, 3, and 4. Doug Brooks is Briante Weber with a dash of Troy Daniels. 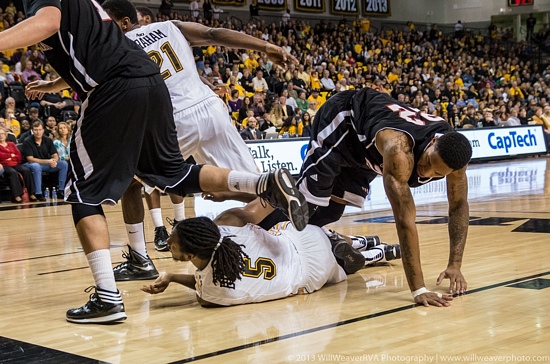 Freshman Doug Brooks finished with 14 points, 3 rebounds, 2 assists, and a steal in only 13 minutes of action. When on the court, he was involved in every play and it took him three minutes to capture the hearts of every Ram fan in the Siegel Center. Coach Smart likes poise and confidence. Brooks showed off both in his first game on Saturday and he should be a part of VCU’s rotation.

“Every time he scores or something good happens for him, I have to smile. He’s a really likable kid. As a player, if you can be really good in terms of natural instincts but at the same time not really know anything about the details of how you’re supposed to play, that would be Doug. The good thing is, a lot of the stuff that he doesn’t know he can learn, and a lot of the stuff he has going for him and the instincts he has, his ability to shoot and score, you can’t learn.” Shaka Smart 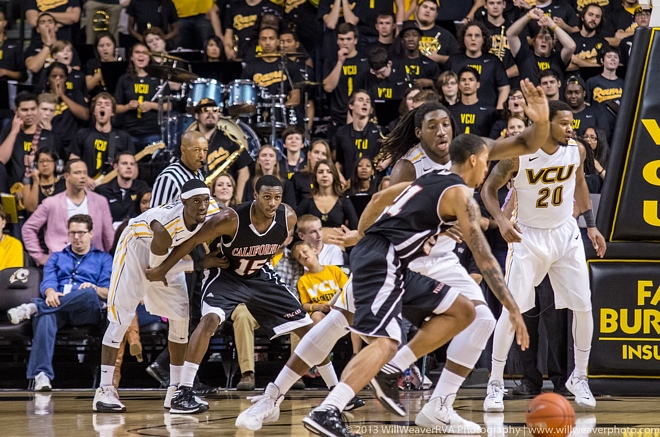 How will new hand-checking rules affect HAVOC! has been the question of the summer. VCU only fouled five times in the first half and only one was a hand-check. They fouled nine times in the second half, but again most of the fouls would have been fouls under the old rules.

Coach Smart is more worried about variability in the calling of the new rules. The Rams fouled 31 times in the first forty minutes of their “secret scrimmage”. At some point this season, the new rules will probably cause some headaches, but HAVOC! has yet to be legislated out of college basketball. 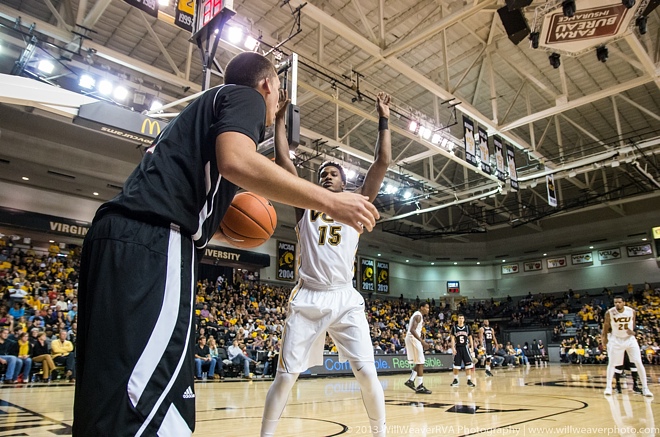 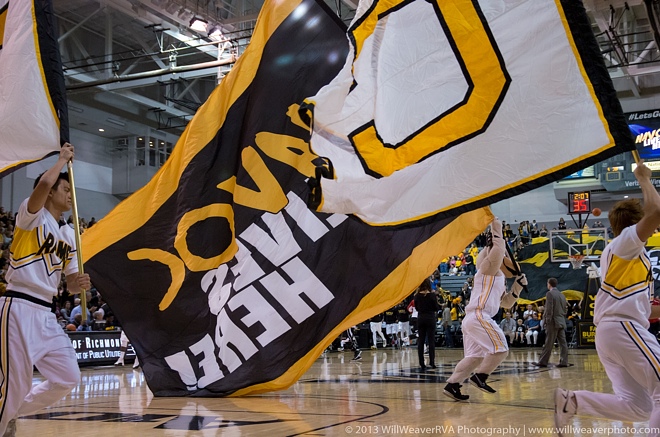 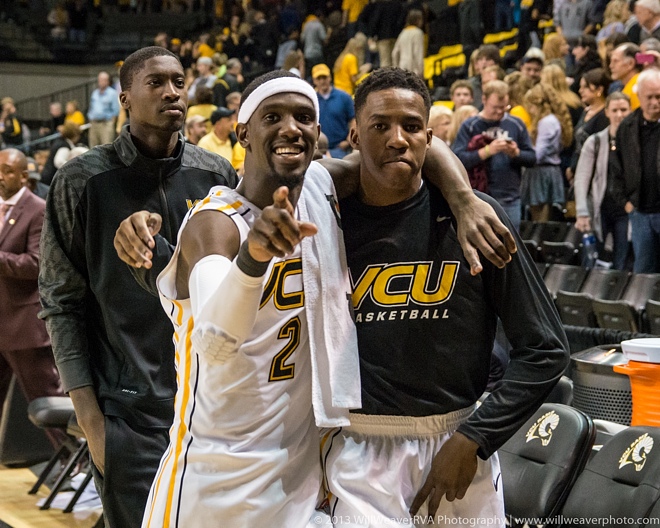 The Rams return to the Stuart C. Siegel Center for their season opener against the Illinois State Redbirds on Friday November, 8th at 7pm.