GRTC releases some more details of the future BRT system. The first of two meetings to show off and discuss the rapid transit plan occurred last night. As expected there were some changes to the original plan and quite a few details were released.

Sen. Mark Warner announced last week that GRTC received a $24.9 million grant from the US Department of Transportation to help fund a bus rapid transit system along Broad Street stretching from Rocketts Landing to Willow Lawn.

Funding roughly half of the project, the grant brings beaucoup bucks to the project that GRTC and others have studied for five years.

The grant comes just weeks before the man behind the standard for bus rapid transit system in the US, Joe Calabrese, travels from Cleveland, OH to speak about that city’s award-winning HealthLine bus transit system.

Richmond has never been closer to its own system than it is now. But just how close is it, and why are people so pedal-to-the-metal about it?

“Something we care about”

“What RVA Rapid Transit is doing as a group of citizens is promoting a full-scale regional vision for rapid transit,” said Andrew Terry, coordinator for the group, by phone last week.

“We’ve done it hundreds of times now,” Terry said about the presentation. “In a church basement to the Chesterfield Chamber of Commerce, the Capital Region Collaborative process, rotary clubs, real estate associations…the reaction to the presentation has been overwhelmingly positive.”

“Usually it’s a bunch of planners, government officials sitting together, and maybe some business leaders who have an interest. Essentially, it’s planners trying to convince civic leaders of the necessity of regional transit progress,” Terry said. But public urging for bus rapid transit in recent years has changed things. “What’s different in this equation is the fact that citizens from four jurisdictions…[Hanover, Henrico, Chesterfield, and the City]…are getting together and entering into the conversation and saying this is actually something we care about.”

Proof is in the numbers. “Being able to turn out a couple hundred people at a [GRTC] public meeting [about bus rapid transit] is very different when rapid transit was talked about three or four years ago,” he said. 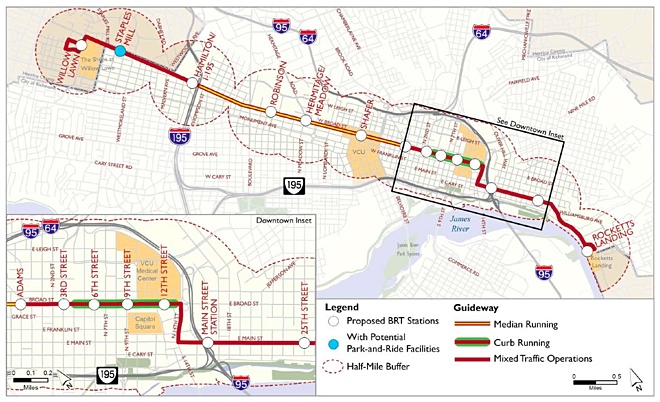 Members of the local study noticed that the local corridor resembled the Euclid Corridor project in Cleveland, what would become the HealthLine. “So they used Cleveland as a proxy for their proposal,” Terry said.

The phrase “bus rapid transit” may not titillate the imaginations of all business leaders, but “$5.8 billion in economic development” sure does, which is the amount the HealthLine has raked in since launching in 2008.

Last year, the Institute for Transportation & Development Policy awarded Cleveland’s transit route a silver designation, the only such designation in the US. “The gold ratings are only in South America and Asia,” Terry said about Cleveland’s HealthLine. “So it’s widely recognized as a model [for other US cities].”

RVA Rapid Transit invited the general manager of Cleveland transportation, Joe Calabrese, to speak at a now sold-out event on September 17th to “provide a forum for citizens, business and civic leaders, and for transportation economic development planners to hear about Cleveland’s successes,” Terry said.

“The Future” On Wheels

“Bus rapid transit…is really taking everything we’ve learned over the last 200 years and integrating it into a new mode of transit, really taking the best of all modes,” said Joe Calabrese, general manager of the Greater Cleveland Regional Transit Authority (GCRTA), by phone from Cleveland last week.

Cars replaced horses and carriages on streets nearly 100 years ago,1 he says. Buses arrived in many cities in the 1950s. Heavy and light rail followed after that.

Calabrese said that traditional bus systems have two main pros: its relative low operation costs and flexibility, meaning routes can adapt to usage. It’s cons: it’s relatively slow and has low capacity, is “viewed by many people as a second-class mode of transportation”, and rarely spurs economic development.

Rail’s pros and cons are inverse: rail has high capacity, is fast, respected, and often spurs economic development. But its operation costs are big, its routes inflexible. 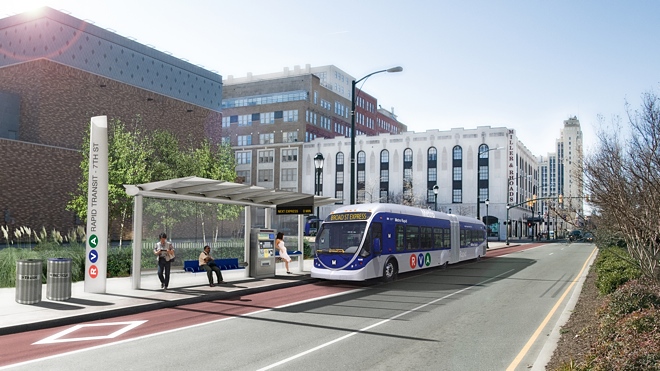 RVA Rapid Transit rendering of what a bus rapid transit system might look like on Broad and 7th streets.

Cleveland installed the nation’s first comprehensive bus rapid transit system in 2008. Part of HealthLine’s success came from its branding. “It’s not viewed as a fast bus. We don’t use the word ‘bus’ in the description of what we do,” Calabrese said. “In the way we designed this, the way we marketed this, the way we branded this was just as one would a rail system.”

In addition to stocking its fleet of vehicles and installing waiting stations, the GCRTA planted 1,500 trees, replaced traffic and signal lights along the 7-mile route, created safer crosswalks, rebuilt roads, sidewalks, and curbs. Employees even change out flowers at stations based on the season.

The HealthLine has changed how Americans should look at bus rapid transit, and transportation in general. Calabrese still believes in the marketing mantra GCRTA coined for its rapid bus transit system: It’s not a bus. It’s not a train. It’s the future.

A future Richmond wants to be a part of.

During a phone interview last Tuesday at 10:00 AM, Stephen McNally, project administrator at GRTC, got a call on his cell phone. He declined the call, apologizing for the interruption.

He’d later learn the call was from Sen. Mark Warner’s office telling him that GRTC had won a $24.9 million grant from the federal government to help fund the city’s bus rapid transit project.

When speaking later that morning after learning the news, McNally let out a WAAHOO heard as far as Petersburg.

“Everybody up here is off the wall,” he said about the federal grant that halfway funds the $49.8 million bus rapid transit project he and GRTC are prepping for.

“We are now just considering the results of a request for proposal for architectural and engineering firms, and we’ll shortly be awarding that contract…for that first phase.”

McNally said the “common and accepted process” for projects involving federal money revolves around three-phases measured by the percentage of a project’s completion:

“What gets accomplished in that first phase is a tremendous amount of activity and due diligence on the project as far as identifying and setting the base course for going forward with the rest of the design,” McNally said. “It really shifts, in that first phase, from a transit study to an implementation project.”

Part of the implementation is making sure you can fund the project. With the $24.9 million coming from the federal government, the remaining funds to cover the $49.8 million total will, according to McNally, roughly shake out thus:

Aside from funding, figuring out the nuts and bolts of the project include: collecting and examining information like traffic modeling, surveying, and mapping which will include “an analysis of loss of on-street parking,” McNally said, adding it’s “critical” for rapid transit buses to have “dedicated lanes.”

Phase Three comprises construction, which could begin as early as 2016. But that inaugural ride on Richmond’s bus rapid transit won’t happen for awhile. “Our end date on that right now is August 2018 as far as opening for service,” McNally said.

GRTC’s project administrator is most excited for how the city’s foray into bus rapid transit system will improve the “quality of life” for citizens.

He reported census statistics indicating that roughly 10 percent of households along the proposed transit corridor don’t have a car. “There is a considerably higher percentage of zero car households [across the city], and with [bus rapid transit] running down that central artery in Richmond, it really provides that transportation choice for access to jobs, education, retail, healthcare centers, [etc].” McNally said. “That’s what we’re excited about.”

With luck, Richmond’s first bus rapid transit corridor won’t be its last. McNally said there additional corridors — ones extending out to Short Pump or Richmond International Airport, and new ones on Hull Street and Midlothian — are feasible and would further invigorate the region.

“But you’ve got to start somewhere,” he said.