That’s a wrap, says the City, officially. We’re not permitted to organize events at the Sugar Pad, and the Peace Wall is also a no-go. The Mayor’s office has announced plans for the Intermediate Terminal Project (known colloquially as the Sugar Pad) (please note that the rendering actually calls it the Sugar Pad! Busted, City! You have feelings!) The press release is below, but to save you some reading, it’ll be a park.

Richmond, VA – The City of Richmond has announced plans to move forward with improvements to the Intermediate Terminal/Intermediate Wharf – a City-owned parcel that fronts the James River on the East side of the city.

Providing increased public access to the riverfront is one of the goals in the City’s adopted Riverfront Plan. Improvements to the Intermediate Terminal Dock are seen as especially timely with the completion of the Virginia Capital Trail – 52 miles of continuous multipurpose trail between Williamsburg and Richmond.

A structural stabilization project has been underway in the Intermediate Terminal area since August of this year. With the completion of that stabilization nearing in early Spring of 2016, the City is ready to move forward with broader plans for improving riverfront access in that area, to include passive and active Riverfront recreational opportunities. Conceptual plans for the development of the area include the possibility of a community pavilion, an event lawn, an interpretive tidal pool, a fishing area, or maybe even swings. An exploration of what the public would like to see created in that area will be undertaken with a planned public meeting process.

“While our Riverfront Plan suggests any number of possibilities for this area, we are ready to have a more direct discussion with the public and to develop more specific plans for enhancements in this area,” said Mayor Dwight C. Jones. “We have an opportunity to lift up the richness of neighborhood history while creating a recreational asset that can unify the riverfront corridor. With the completion of the Virginia Capital Trail, the east riverfront area is being utilized more than ever, and we look forward to creating another accessible public space for the city’s enjoyment.”

Local civil engineering and design firm, Timmons Group, has been contracted to develop conceptual plans for the Intermediate Terminal. They will be holding public meetings beginning in mid-January 2016 to discuss project concepts and design recommendations.

The Richmond Riverfront Plan emphasizes the importance of the riverfront as a singular destination and attraction unique to Richmond which can catalyze growth for the whole city and in specific areas. The plan provides for phased riverfront improvements to reinvigorate existing public spaces and establish new public landscapes of varying character, program and scale. Along the east riverfront, other progress has been seen with the demolition of the Lehigh Cement silos and installation of the Low-Line project with CSX and Capital Trees. In other riverfront news, the City has also recently announced plans for Port of Richmond improvements and began construction on the T. Tyler Potterfield Memorial Bridge.

The verdict is in–after much back and forth, Rick Tatnall finally got his answer about whether or not the City would hold off on demolition of the Sugar Pad and whether or not a big anti-racism mural was OK to paint there in the meantime.

Unfortunately, it’s a no-go for now. Sharon North, Public Information Manager for the City of Richmond’s Department of Public Works cited the lack of concrete plans for the area as well as ADA concerns as reason enough to deny permits (see full text of the email below). She also requests that events on the Sugar Pad cease and desist–but Rick reminds us that this applies to organized events. Hangin’ out, when done casually and with minimal organization, is legal wherever. “That’s an opportunity to exercise civil disobedience without arrest–just by going there,”
he says.

As far as the planned muraling goes, Rick needs to discuss with artist Mickael Broth before he decides what they’re both up for doing. But for now, his personal position is that “The ability to beautify what is now an ugly, awful-looking wall would be advantageous and in no way would create an issue for the Pad.”

The Department of Public Works respectfully declines your request for “…permission to facilitate a community painting project that would paint a mural on the pad surface and a “Peace Wall” on the 4 foot high foundation wall.” DPW arrived at this decision based on the following:

Mr. Tatnall, it has been brought to the attention of DPW that you have held events at the “Sugar Pad.” All events on City property require proper permits and insurance. As such, we must ask that you immediately cease and desist engaging in any unsanctioned activities at that location and any other City-owned property without following proper procedures.

Well, that’s it for the Sugar Pad–that big raised concrete-slab-turned-unofficial-event-space down on Wharf Street. It’s scheduled for demolition in 8-10 weeks, which Rick Tatnall found out via an email from the Department of Public Works.

Rick has made it his personal calling to focus on improving the East End in any way he can, adopted the slab a few years ago along with Ralph White, former manager of the James River Parks System.

Read more about where the name came from, what Rick’s plans were for the Pad, and why it’s significant in this September 2014 article by Nathan Cushing.

But there were plenty of issues. Rick Tatnall is totally aware that the Pad needs repair–some trees have uprooted concrete and there are some safety issues that, from what he understands, would take a whole lot of money to complete. “I just never, ever, ever thought they’d destroy it,” he says.

Rick threw his first event on the Sugar Pad in June 2014, with the advent of his Full Moon Series. Slowly but surely, awareness grew, and the place is now well-known in the area as a spot that, while not exactly sanctioned by the City, isn’t monitored by the City. Yeah, yeah, that sounds kind of shady, but Rick’s in frequent touch with City Hall, and he contends that their unofficial position has been more like a big shrug.

In fact, their Riverfront Plan included turning the Pad into a…well, I’m not sure what to say except “sweet hang spot.” There’s a promenade! A boardwalk! A place for ships to dock!

This elevated paved slab continues to be used as a multipurpose platform for various events, including the Tall Ships Festival. A seasonal or permanent community pavilion could be positioned on the wharf slab, capitalizing on the raised promontory for events. — Richmond Riverfront Plan, 2012 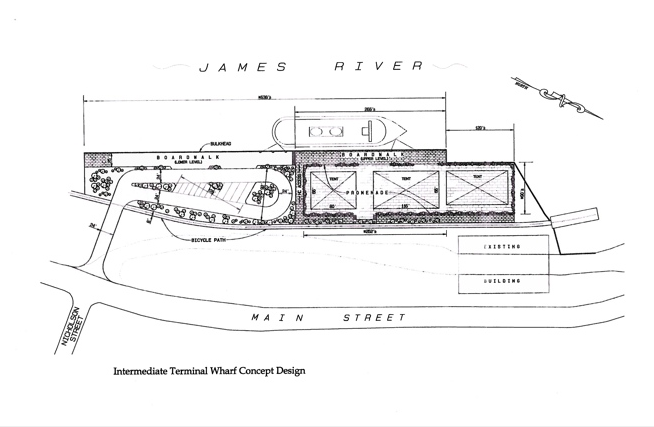 Concept design from City of Richmond.

Rick was just on the verge of getting something really neat going, including some good old-fashioned muraling by Mickael Broth and Ed Trask (talks had been in the works about a full-scale reproduction of a slaving ship to help viewers literally fit themselves into the schematic and develop some powerful empathy).

“We’d never really gotten the momentum I wanted because we were waiting for the Capital Trail to be completed,” says Rick, who finds himself having to slam on the brakes just as he was revving the engines.

This weekend, Rick made a plea to his contacts to spread the word about the events he’d already planned, unofficial and sans-permit as they might be. He’s got a year and a half under his belt, pulling off successful events designed to bring a community together, like Richmonds of the World, the Full Moon Series, a group burial of the Confederate battle flag, and more.

Now, he’d like for the City to just delay its jackhammering date until January 4th, 2016. That’s really it. “In no way do I ever expect the City to stop demolition plans,” he says. “But the bottom line is, let’s just use it while we’ve got it! It’s a good spot, I’ve been keeping it clean, and I just want to have a lot of activity down there.”

To start, Rick’s got these four events on his calendar, including the mural:

What about the city’s plans for the area? And where’s that demo money coming from? Who knows! Well, the City probably does, but they’re not saying just yet.

“Solid plans have not been signed off on as of yet,” says Tammy Hawley, Press Secretary to the Mayor. “We plan to make an announcement when we are ready to move forward.”

Head down to one of the above events, or contact Rick at rick@replenishrichmond.com to plan your own event! Time, it is running out!