One man’s passion for neglected riverfront property may soon reap benefits for the city. Rick Tatnall has collected and sorted trash at 3101 Wharf Street since May. It’s a far cry from the work the local activist, and one-time mayoral candidate, typically does.

Tatnall, who’s behind the community-oriented Replenish Richmond, voluntarily stewards the property1 near Rocketts Landing because no one else will. Not even the City, which owns the neglected land along the James River.

“The only way DPW2 will pick up the trash down there is if all the cans are co-mingled together on the street level,” Tatnall said. “So every Wednesday…I’ve been going down there to be a trash commingler, which is an interesting experience in its own right.”

But if the wheels in motion keep accelerating, and especially if a San Diego brewery decides to tap into the area, a barren concrete slab 30 percent larger than the 17th Street Farmers Market just might become a destination for residents, tourists, and even cruise ships.

The Intermediate Terminal Warehouse #3 in the East End was built in 1937 and was where ships unloaded 1.5 million tons of freight in 1939. Long-closed, motorists on Wharf Street can still drive under the abandoned warehouse.

That warehouse once had a sister building next to it, known for the vast amount of sugar3 it stored. The City razed that sugar warehouse in 2006 ahead of the 400th anniversary of the Jamestown settlement, leaving only a bare concrete slab. Tatnall coined the slab the Sugar Pad. Embraced by the former and current manager of the James River Park System, the unofficial moniker has slowly caught on.

But long before coining Sugar Pad, Rick Tatnall and Ralph White, the former longtime manager of the James River Park System, bemoaned the nearly five acres of under-used space in the Intermediate Terminal area. “People just didn’t know about it,” Tatnall said. “They weren’t even sure if they were allowed to go on [the slab].”

Letting the area languish seemed “really wrong” to Tatnall. “It’s in the 90-degree turn in the river, which offers just exquisite views,” Tatnall said. The regularly seen osprey, bald eagles, herons, and geese only add to its appeal. But the neglected Intermediate Terminal and surrounding area blights the view.

Not so at the Sugar Pad’s twin site in England.

Richmond upon Thames is the London borough that serves as Richmond, VA’s sister city. It was William Byrd who named our city Richmond because of the James River’s comparable views to those of the River Thames.

Tatnall has visited the River Thames and been to the spot that essentially replicates the views as seen from the Intermediate Terminal. The only difference: whereas the Sugar Pad is an eyesore, the London equivalent is a booming community locale. “Knowing the kind of activity at the spot that would correspond to where the Sugar Pad is, that’s always kind of weighed heavily on me, how it would be nice if we could change that,” Tatnall said.

The authors of the 2012 Riverfront Plan agreed. They wrote this about the area:

This elevated paved slab continues to be used as a multipurpose platform for various events, including the Tall Ships Festival. A seasonal or permanent community pavilion could be positioned on the wharf slab, capitalizing on the raised promontory for events.

A floating dock could be attached parallel to the front of the Warehouse Dock, with an associated gangway for access down, accessible for fishing as well as boat access. There is the potential to attract a relatively new class of ocean-going cruise ships, each approximately 250-feet in length and requiring a substantial 300-foot long dock to tie up to.4

But without noticeable action from the City up to this point, Tatnall believed city officials were ignoring the spot. “They didn’t feel it was that compelling of a spot,” he thought. To change their minds, Tatnall commissioned Replenish Richmond’s version of what the area could look like. He also used the Sugar Pad to host Full Moon events, where onlookers regularly pair full moons with the city skyline.

But the Sugar Pad and surrounding area may not be a lost cause. If what Tatnall is hearing proves true, it’ll be a San Diego brewery that will call Sugar Pad home.

Tatnall has kept in touch with the City about its views on the Sugar Pad through David McNeel, the City’s senior policy advisor, who even gave Tatnall a tour of the site. Tatnall said one possibility he’s hearing is that Stone Brewing Co. is interested in the area.5

“Stone Brewing is eyeing the terminal building as their restaurant and retail space,” Tatnall said. “Which would be un-freaking-believable.” If it shakes out, the San Diego-based brewery would take over the Terminal Building above Wharf Street. “And then the Sugar Pad would be their front porch.”

But even if Stone Brewery doesn’t take over the space, Tatnall wouldn’t be heartbroken. “Even if Stone doesn’t come, there’s now a lot of attention [on] the building,” he said.

Turns out some of that attention is from the City.

Chris Beschler, the City’s Deputy Chief Administrative Officer, said the City wants to use the Sugar Pad site to give people “greater access to the James River.” The City even has a preliminary concept plan (see below) that would reshape the Sugar Pad area, provide a boardwalk for small boats and fisherman, and use the upper wharf for taller ships–even cruise ships–to dock. 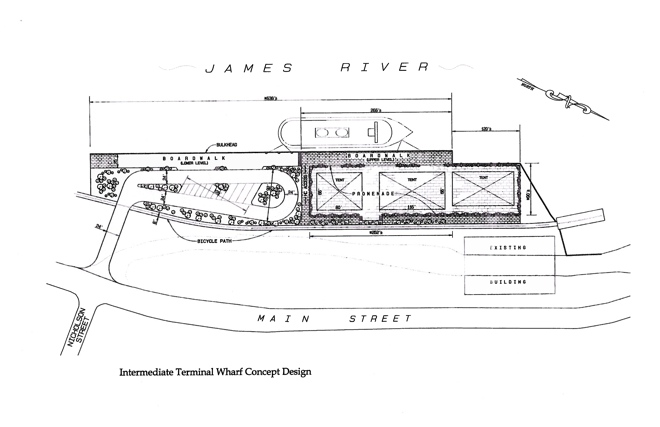 Concept design courtesy of the City of Richmond (click to enlarge)

However, Beschler underscored that the concept is preliminary and far from a done deal. “We’re still in the early stages of vetting this,” he said.

Beshcler said the City has hired a structural engineering firm to analyze portions of the area. How much work existing structures need would set timetables for the project’s completion. Beschler wouldn’t hazard a guess as to when the proposed project could be completed, so much remains unknown.

In talking with David McNeel, Tatnall has heard it will cost roughly $2 million to fix the Intermediate Terminal dock, with most going toward replacing the dock’s wooden piling foundations. But according to Tatnall, the City only has $1 million allocated for the area.

“We go and find a $1 million or more dollars from the community and match the City’s $1 million, and let’s just go ahead and do it,” Tatnall said. “Get it all fixed up now.”

Whether it’s Stone Brewery, or a City-renovated area for fishing, boats and public space, Tatnall said the Sugar Pad and surrounding sites could become one of Richmond’s most popular areas. “It would be an immediate transformation,” he said.

And it would mean he’d no longer have to sort trash on Wednesdays.