Officials and leaders spoke at the RVA Bike Forum last night to highlight and present ideas to make the city more bike-friendly. From Mayor Jones to the new bicycle coordinator, it seems that the wheels are in motion to make Richmond the next Portland.

Officials from various Richmond organizations, government entities, and VCU presented information on different bike goals and initiatives last night. Mayor Dwight Jones provided introductory remarks before several PowerPoint presentations were given to roughly 100 people assembled at the Virginia War Memorial. “We’re excited about cycling,” said Mayor Jones, who was not originally scheduled to appear at the event, but shifted his schedule to speak and attend the first part of the collected presentations. One statistic that the Mayor focused on was bicycle commuting in Copenhagen: 38% of Copenhagen citizens commute daily via bicycle. “We look forward to the day” when such opportunities can happen in Richmond,” he said. 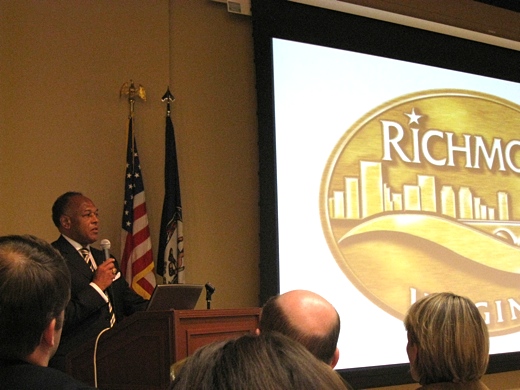 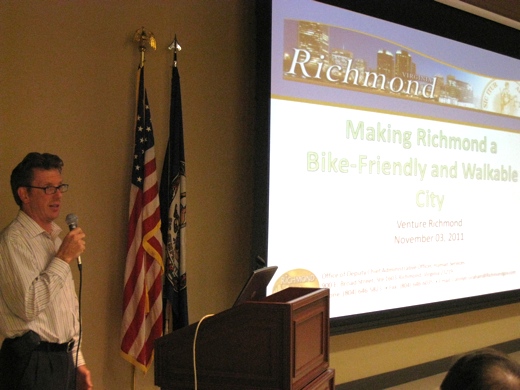 Helmboldt said that individuals walk an average of 3 mph and bike at an average of 12 mph. Using those measurements of speed, Helmboldt put together a map that depicted Richmond with three concentric circles to illustrate how quickly one could both walk and bicycle around town, using City Hall as ground zero.

The slide shoes how consolidated the city is, and how traversable it can be through cycling and walking. This fact, says Helmboldt, “makes the city more accessible,” making cycling a pragmatic intra-city travel option. 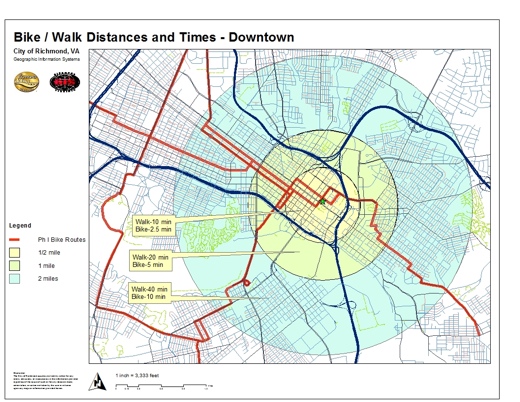 A map visualizing the cycling and walking times within the city

Less than 1% are considered fearless cyclists, persons who will cycle in virtually any condition no matter how inconvenient or dangerous. Approximately 7% of people are “enthusiastic and confident” riders. However, nearly 60% of the public are “interested but concerned” when it comes to cycling—individuals  who are willing to try cycling, but are worried about their safety while doing so. The remaining people, 33%, are in the “no way; no how” camp. The key takeaway is that a majority of “people need to feel safe and comfortable with the idea of bicycling,” before they will begin cycling, said Helmboldt.

The new coordinator also touched on his philosophy of grabbing “low-hanging fruit.” In order to build momentum for broader, longterm initiatives the city should implement what is implementable _right now_. He spoke of “Phase 1 bike routes” that will consist of more bike lanes with sharrows by May 2012. Phase 2 will consist of new routes that will also incorporate sharrows and will serve as a growing core of commuter routes. By the end of 2012, Richmond is projected to have 75 miles of sharrow lanes. 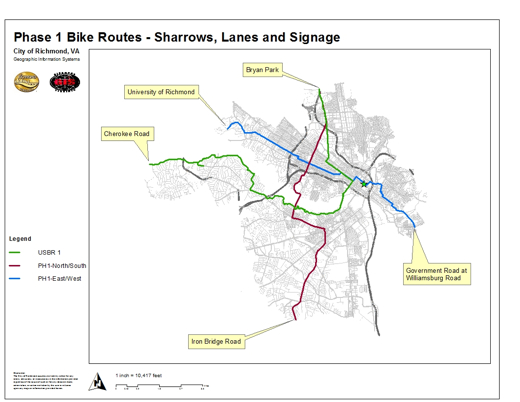 Helmboldt also said that bike racks will be installed around the city where there is “existing demand.” He mentioned being in talks with the Virginia Museum of Fine Arts to design custom, sculpture-based bike racks that can be placed around the city.

Later in the evening, Executive Director of Richmond 2015, Tim Miller, spoke. Miller predicts that the nine day, twelve race event will be covered by 500 media outlets from 35 countries. He said that Richmond has a “four year window to show off our city and our state to the world.” It’s projected that the event will net the Commonwealth $135 million dollars in revenue, and that Richmond will gross $86 million for itself.

Miller said that the 2015 event will serve as an impetus to “transform [the] region into a bike-friendly” part of the country. 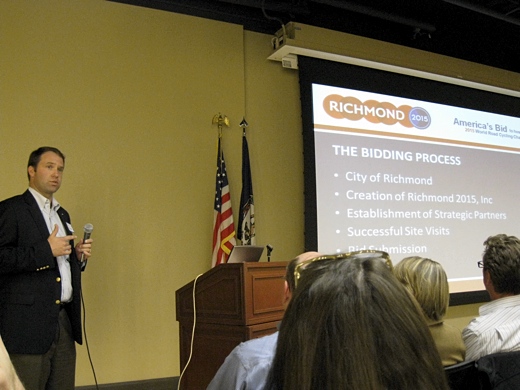 While many of the presenters focused on a macro-level concepts and initiatives, representatives from VCU spoke about how the university is implementing bike-friendly stratagems. Jacek Ghosh, Director of sustainability at the university, said that VCU has a goal to be “climate neutral” by 2050. “Sustainability is apart of the university’s goals.” Ghosh said that VCU currently has 50,000 students, faculty, and staff. Every year, they travel 40 million total commute miles, a statistic that caused several in the audience to gasp.

Brantley Tyndall, Sustainability Assistant, then spoke about current and future bike-related plans at the university. Tyndall said that VCU plans to implement a bike share program. Approximately ten stations would accommodate 60 theft-deterrent bikes at solar-powered kiosks. Tyndall said that the university should name a vendor for the project soon.

Tyndall also highlighted that the university has installed four self-repair racks with secured “dangling tools” for cyclists to make repairs while on campus. VCU has also installed two strategically-placed “mobility hubs” that serve as a multi-modal transportation station. All hubs are located on a GRTC bus line, and are (or will be) in proximity of Zipcars, bike share station, public bike racks, outdoor air compressor, Level 2 electric charging for electric vehicles, and preferred parking for electric vehicles.