Opening a dialogue: John Jessie on living with HIV

He went into the Fan Free Clinic thinking that his HIV test would come back negative. It didn’t. After recoiling from life, afraid to even be around children, John Jessie decided to use his diagnosis and his life to help, not only himself, but others.

This is John Jessie talking. Six years ago, at age 24, John went to the Fan Free Clinic “to get my very first test.” A positive result was the last thing on his mind. Being at the clinic was a mere formality–something he did just to make sure that he didn’t have HIV. Six years after that day, he can remember what the person who administered the test was wearing, the exact day and time, and his reaction when he found out he was, in fact, HIV positive. “It was the end of my life,” said John, reflecting on that moment.

In the following months, John recoiled from life. “I didn’t want to go anywhere with kids,” so paranoid was John that he would contract germs that most consider innocuous. “You have a fear in you.” The fear is that someone with HIV comes down with something simple, say, the common cold. That cold leads to pneumonia. Pneumonia leads to death.

As part of his withdrawal from life, he deliberately avoided the group meetings at the Fan Free Clinic. Instead, John drank. He tells that on his 25th birthday, hungover and miserable, he had an epiphany: “I have to take control of my life before I don’t have a life to live.” That’s when he went back to the Fan Free Clinic.

“They truly make you feel important when you walk into the door,” said John. “They do it flawlessly.”

John began regularly attending the men’s group meetings. He learned from others that it takes time to no longer fear a potential cause of death at any give moment, to liberate oneself from that fear. Being around others with whom John could relate helped in that process. The meetings, he said, “allows you to vent…it provides you an outlet.” 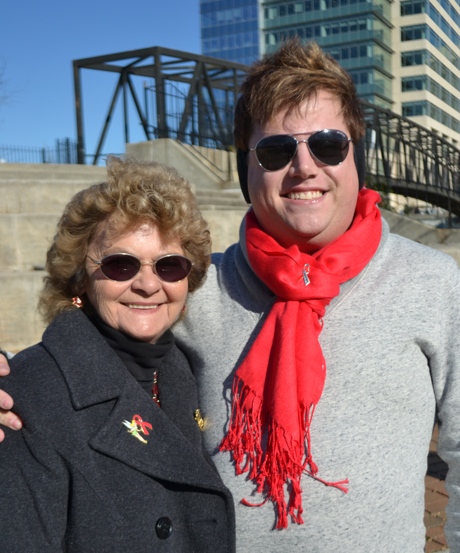 John Jessie and his mother, Doris, at the 2011 RVA Remembers event

“It’s hard for non-HIV people to relate,” he said, to those that have the virus, and to the many concerns and fears and social shunning that, even in its subtlest of forms, are nonetheless hurtful. Especially when it comes to dating.

There have been moments when, during the course of casual dinner date in which the proverbial sparks start flying, that John will be honest about having HIV. After hearing the candidness, sometimes the other person will leave the table. Most recently, however, John was snubbed in an unexpected way.

Every year, John has a small star tattooed on him. He gets each one on the date he was diagnosed with HIV. He went to a local tattoo artist, told the artist what he wanted to get, and the artist agreed. When the topic of why he had a small collection of stars on his body came up, John mentioned how he was diagnosed with HIV six years ago. The artist flinched, telling John that it was against “policy” to tattoo someone with HIV or AIDS. John said he was taken aback by the pronouncement, considering that the tattoo artist has such a low risk for infection while tattooing an HIV-positive client. “It hurt my heart a bit,” said John. Of all the rebuffs he’s received over the years for being HIV positive, he said that this particular instance is “the one that’s bothered me the most.”

John feels that it’s the lack of education that made the artist needlessly fearful. Ultimately, another local tattoo artist added John’s latest star, telling him that his constellation of commemorative stars were “‘amazing.’”

Part of why people recoil at people like John is that, in his estimation, media coverage on HIV/AIDS matters “has dwindled drastically.” Yes, it’s a good thing that the public paranoia that occurred when HIV/AIDS became public discussion does not, for the most part, exist. But John thinks that the price for that is that public discussion and awareness have nosedived. “If you stop talking about things, they don’t get better.” This is why John is talking.

“It’s the big picture that matters,” he said. “If I can actively open a dialogue,” then he can disseminate both information and personal experience into the world. John understands that he will meet people who won’t date him because he has HIV. He understands this, but is just looking for people to “extend a courtesy,” said John. Make him and others “feel human.”

Although he still encounters various degrees of denigration, having HIV has given John a sense of freedom that others do not have because an HIV positive result made him confront his own mortality. After all, finding out that you are closer to death than most forces you to consider what is really important in life. “You don’t let the little things bother you,” said John, smiling.

This personal freedom, however, often arises only after immense misery.