Last Friday was a day that will live in history, and Abby Waller has many thoughts and feelings on the subject as she recuperates from the Decision Day celebrations. If you missed Abby Waller’s Our House: Living out-proud in the gritty River City, we recommend you read it. Now, she shares her excitement about SCOTUS’s 5-4 decision in favor of legalizing gay marriage in all 50 states.

I’m writing this on Monday, my least favorite day of the week–and this time around it came seemingly so much more quickly than other weeks. More than likely, this is because this past weekend was an absolutely whirlwind of celebrating, smiling, and rainbow-covered fun. And, I guess time flies when you’ve finally won and you unleash all of your relief and glee on an unsuspecting 30-something-year-old body over the span of 54 hours.

Love has won; truly and finally, for countless citizens across the country.

On Friday, June 26th, 2015, the U.S. Supreme Court ruled 5-4 that marriage is a fundamental right for all citizens regardless of sexual orientation. I was fairly confident that I would be absolutely worthless on Friday and glued to my phone, checking SCOTUS blog and Facebook for updates on a ruling from the Supreme Court. There was much buzz that a decision would come on Friday, so numerous people on both sides of the marriage equality debate all waited anxiously for word from the Court.

Every time an important decision has occurred in the fight for marrage equality, people always ask “Where were you and what were you doing when you found out?”

Well, this time around I was busily working, and I don’t work in one of those environments where it’s cool to wear glittery rainbows from head to toe (you lucky bastards) or run around screaming the lyrics to Diana Ross’s “I’m Coming Out” when a freaking AWESOME and gay-tastic thing like this occurs. But, as fate would have it – when I found out I was very close to the office of a dear friend that I work with who is a little slice of supportive heaven.

And this is how I got the news: 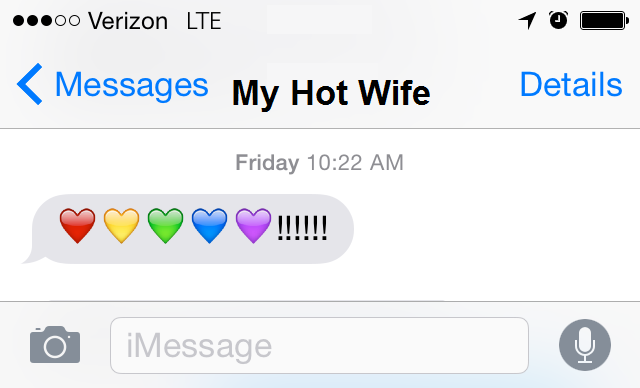 I immediately ran into my slice of supportive heaven’s office and jumped up and down while squealing incoherently. Finally, after catching my breath, I got some understandable words out of my face hole.

A look of sudden understanding followed by pure happiness washed over my friend’s face. She then stood up and grabbed me in an all-consuming hug. We both jumped up and down and squealed together while blurting out things like:

“I’m married in whatever state I travel to!”

“Gay people can have babies everywhere!”

“My wife is truly my wife in all 50 states of the country I live in!”

“Oh my God, Oh my God, finally! I can’t believe it finally happened.”

I’d been keeping my eyes peeled for any events happening on the Day of Decision around RVA. The Byrd Theatre seemed like the immediate place to be at exactly as-soon-as-most-people-get-out-of-work o’clock on Friday. The Theatre was hosting a Marriage Equality Celebration, news conference, and reception put on by awesome organizations and local businesses – from [Diversity Richmond] and Fan Free Clinic to ROSMY and Virginia Pride–from all over the city. So my wife and I drove to Carytown to celebrate with our LGBTQ and LGBTQ-supportive community. 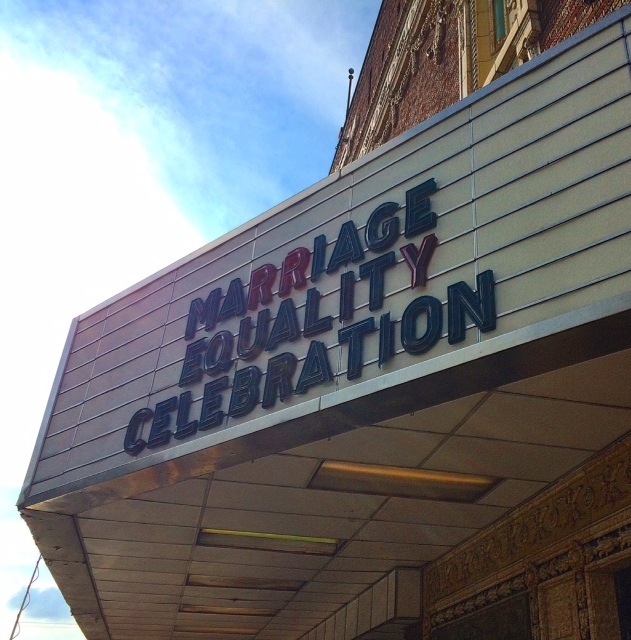 We arrived right on time. The theatre was alive with jovial chatter and lots of hugging. Sprinkled throughout the crowd were couples–married and unmarried–who’d been together for varying spans of time, but were all united in an unfathomable amount of gladness. When Todd Schall-Vess, general manager of the Byrd Theatre and opening speaker stepped up to the mic to address us all, a hush fell over the crowd until he said the words “marriage equality,” and then a celebratory roar took over the 87-year-old movie palace.

The rest of the reception went much like that. We heard from Bary Hausrath, the president of the Richmond Business Alliance, who seemed adorably flustered at first–forgetting to hold the mic close to his mouth when speaking–but then read a heart-felt letter of congratulations from State Senator Donald McEachin, who stated, “Finally, no law will tell us who is a family and who we can love.”

There was more cheering from the crowd followed by a standing ovation after “vows” to keep up with the fight for full equality were read. 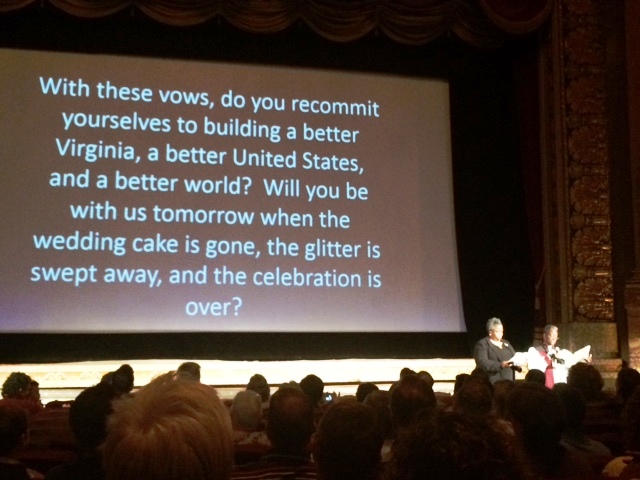 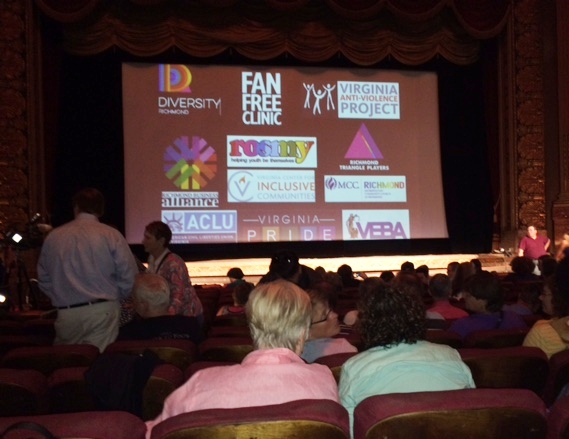 The business and organizations involved in putting on this event.

It’s hard to describe the feeling you wake up with after the victory of something so great after fighting so hard for so long has been achieved.

It’s like having held your breath under water for a few seconds too many. You dive in head-first and travel a great distance while meeting resistance along the way. But you keep going, even though it hurts–even though you aren’t sure at times that you could do it. Just when you’re exhausted and out of breath, and you feel as though you couldn’t take it any longer, you muster up your last bit of strength. You kick and fight to reach the surface, and when you finally do… You take the deepest and most satisfying breath you’ve ever taken.

That’s what it is like to have, finally, this piece of equality.

Notice I said “piece” there. It’s true, the LGBTQ community got a very big slice of marriage equality wedding cake on Friday. Believe me, it’s delicious, but I’m a second helpings kinda gal. I love my marriage equality, now may I please have a hearty dollop of the Employment Non-Discrimination Act or a gravy boat filled to the brim with federal legislation making violence against LGBTQ individuals a hate crime?

My heart is still full from this past Friday’s triumph. We won. We won, and we’re going to keep winning. Here is my advice to those who are still not on the supportive and accepting bandwagon; I recommend that you get on board because we’re not slowing down. We’ve tasted victory and are fortified by it. We’ll always make room for another ally, so unite in the good fight with us because this is a noble and true cause worth fighting for and like I said, we’re going to keep winning. 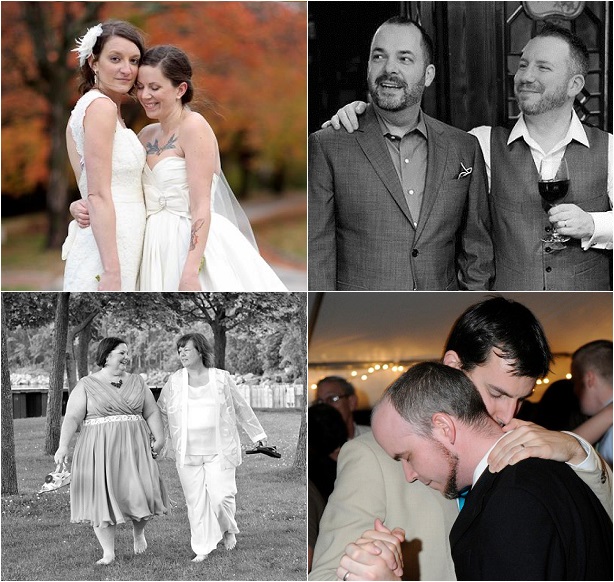