Our House: Living out-proud in the gritty River City

In rich-in-history and dredged-in-butter RVA, you can hold your same-sex sweetie’s hand practically anywhere you go and most won’t bat an eyelash. It hasn’t always been the case, but these days you’ll find not only tolerance in our bars and restaurants, but as you’re seated at a table for two, you’ll likely receive a warm smile and a “What can I get y’all?” I have lived in the gritty city of Richmond for most of my life and all of my out-of-the-closet life.

At the confusing age of fifteen, with hormones clamoring to the forefront of every move I made, I recall dipping my big toe into the waters of queerdom. It happened to be on a molten hot day in July while I was also dipping my big toe (and the rest of myself) into the murky waters of the James River to seek relief from the stifling, thick-as-tomato-soup air.

With me that day was my pack of friends along with my best gal pal who was visiting for the summer. My eyes moved over her small frame with a new intensity, and as the sun started to fall, I remember gazing out over the James and fighting a gnawing panic about all that I was feeling in the pit of my stomach.

As queer individuals living within the city, we still get to sip sweet tea without feeling like we’re constantly being eyed by a lynch mob.

Virginia does not spring into people’s minds as a progressive or liberal state. Many still see it as the Capital of the Confederacy and, undoubtedly, conjure up images of big-bellied bigots and good ‘ol boys in trucks with rebel flag stickers on the bumper.

Well, they wouldn’t be totally wrong. Virginia does have its fair share of those things. But we have so much more. 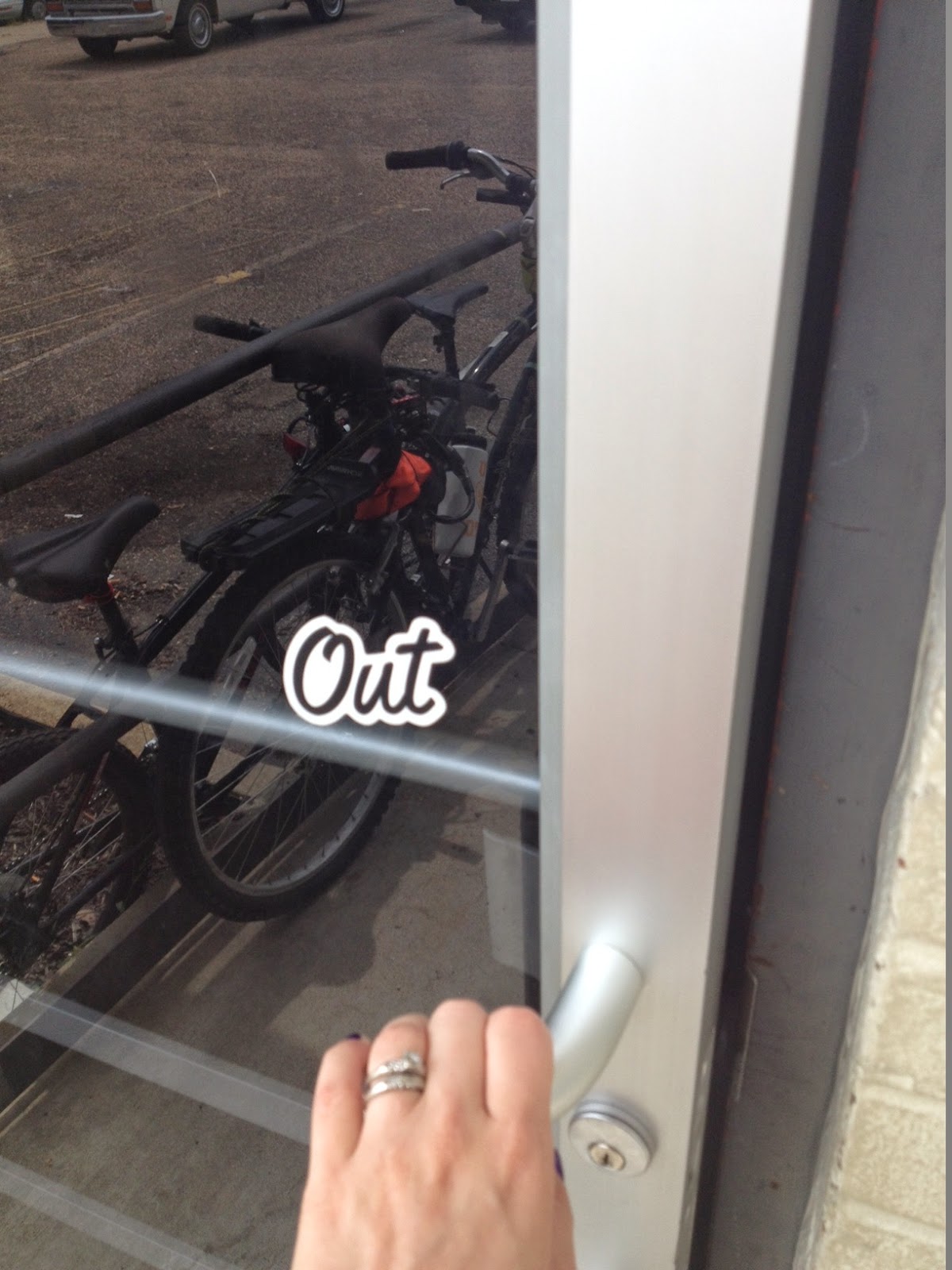 “Out” sticker on the door of an LGBT-friendly business.

I like to think of Richmond as this little sanctuary nestled in the deep-fried south. As queer individuals living within the city, we still get to sip sweet tea without feeling like we’re constantly being eyed by a lynch mob. Richmond has come a long way in the fifteen years since I made my way across the unsure waters of admitting to myself that I was gay. I remember kissing my first-ever girlfriend outside of my dad’s condo and having a neighbor tell me I was blasphemous and sinful in the eyes of god. I recall another time, kissing a girlfriend at Belle Isle and having a woman approach me and ask me where I found the audacity to put on such a disgusting display in front of her young and impressionable daughter.

Lastly, I do not embellish when I say that I was literally punched in the face by a girlfriend’s roommate and called a “dyke.”

Maybe it’s just luck, but all of these occurrences were more than ten years ago. Of course, the city I call home surely still contains plenty of people that would delightedly gay-bash me or the queer ones I love…but I’m thinking more and more that they’re outnumbered by an accepting and open-minded majority.

I met my wife at a party in the Fan, and we had our first kiss in the city’s only lesbian bar. There is not what I’d call a bustling gay scene in RVA, at least not for lesbians, but we do have a sense of camaraderie when things really matter. We band together and show up in droves each year to RVA’s ever-expanding Virginia PrideFest, and we chant together in front of City Hall to demand the right to love who we choose without discrimination. 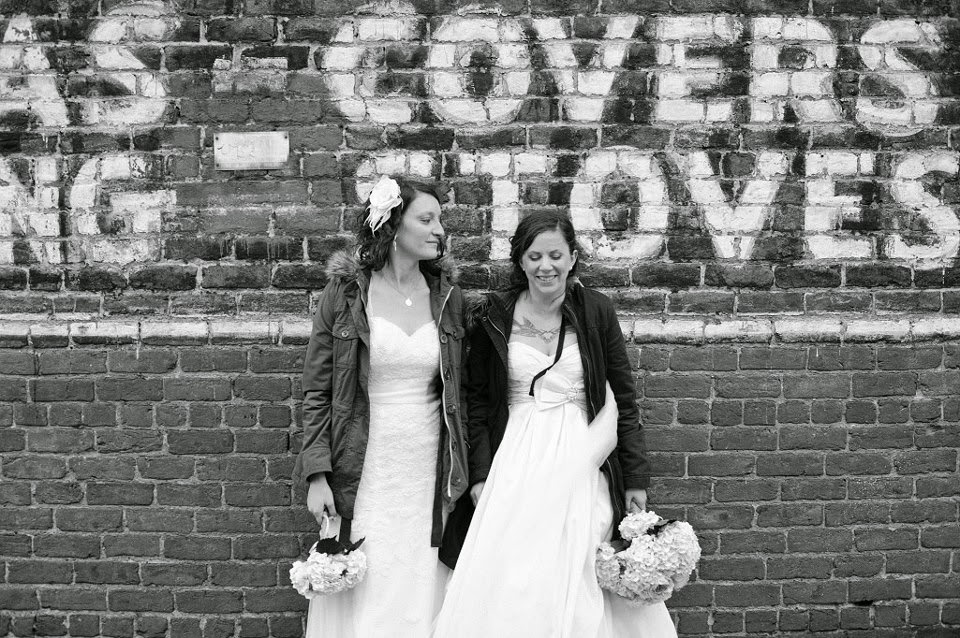 My wife and I on our wedding day, outside of Gallery5.

After years (decades for some) of fighting, rallying, and demanding equality—just a few months ago, the Supreme Court of the U.S. denied review of important same-sex marriage cases, therein finally bringing marriage equality to Virginia.

After almost three years of my marriage not being recognized by the very place I call home, the wait was over.

Richmond living is now better than ever for married same-sex couples. I believe our city has always been a great one, but now when I walk its familiar streets and past the muralled buildings that I love, I finally feel that—really and truly—my city loves me back. 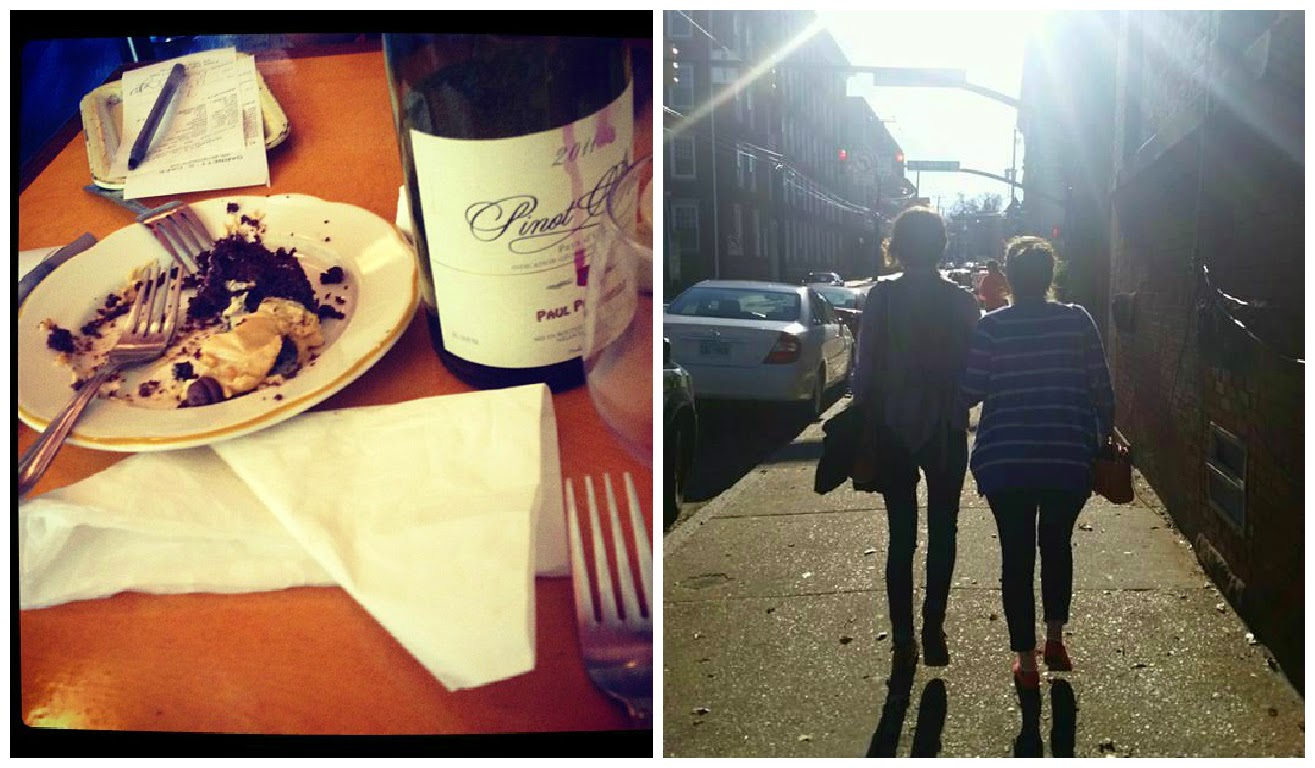 The remains of dessert and wine on a table for two at Garnett’s Cafe. Right: My wife and I walking through the Fan district.