By far the most ambitious letter “L” we’ve ever seen. Organizers behind the LOVE sign made of aluminum cans that seek to break a Guinness World Record (see below) have released this photo of the L: 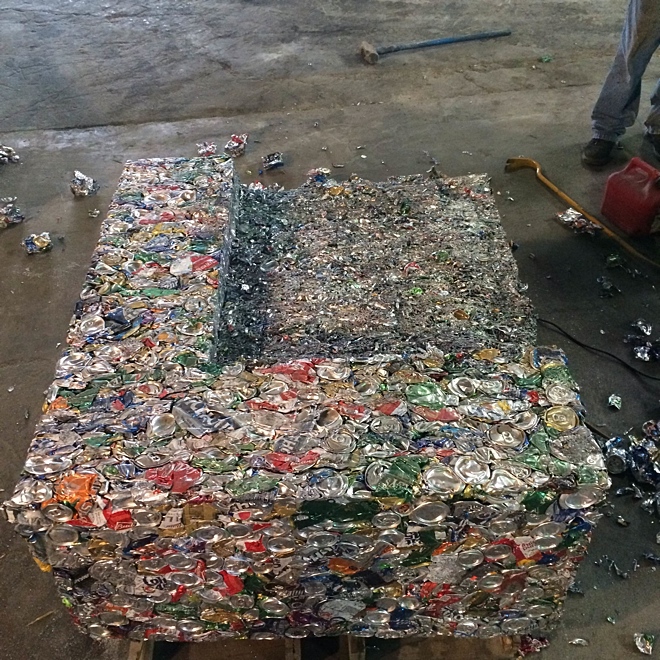 The full sign will be unveiled at Earth Day Richmond on April 26th.

Here are the locations where people may donate their aluminum cans to the project:

Sculptors will try to break the record for the largest aluminium can sculpture by welding 110,000 cans into a LOVE sign. That sign will be unveiled at the Earth Day Richmond on April 26th.

“We wanted to do something that shows something our love of the planet and our commitment to sustainable practice and environmentalism itself,” said John Sydnor, executive director of Enrichmond, the nonprofit backers of the annual Earth Day festival.

Enrichmond partnered with Prabir Mehta of My Glasses Rule, a local marketing and consulting, and others to create the “Save the Cans” project.

“The can aspect, I think is a simple one,” Mehta said. “It’s a powerful and feasible goal to reach as a state and nation…to give [aluminum cans] a recycled and second life.”

Roughly 110,000 local cans will be resurrected into the largest aluminium can sculpture on the books with Guinness World Records1 with the help of two sculptors.

“There’s going to be a lot of compacting, compressing, and sawing involved,” Mehta said about the sculpture. River City Recycling and TFC Recycling will collect the cans and “smush them to the most compact raw block that we can work with.” He said that the recycling centers will use available equipment2 to count the number of cans used to ensure the Guinness World Record is broken.

Enrichmond asks that Richmonders donate their aluminum cans to the project. Drop-off locations will be announced soon. People can also follow the project online using #savethecans.

Staying true to the nature of recycling, organizers will recycle the LOVE sign sometime after it’s unveiled in late April. In addition to the LOVE sign unveiling, the Earth Day Richmond festival will feature a faux house comprising recycled items, plus food and vendors. Sydnor and Matta said the goal of the festival is to get people thinking about how easy and beneficial recycling is.