City Council: the good, the bad, and the ugly

What started out as a perfunctory City Council meeting ended up having a rather children-related bent. Shel Silverstein’s “The Giving Tree” made an appearance right before the Mayor criticized the state of the city’s public schools. Here’s the recap. What started out as an unremarkable night at City Council stayed that way—with the exception of closing business that resulted in a series of incoherent and off- topic rants. There was also a bit of substance and a surprise visit by the Mayor, but we’ll get to that in a moment.

Opening ceremonies never waver. First, we have the call to order. Second, we have the invocation. Third, we have the Pledge of Allegiance, and finally, the clerk reads the emergency evacuation plan—just like a Friday night at the Byrd Theatre!

As usual, business starts with the Awards and Presentations, which fall into two categories: the routine and the adorable. Let’s start with the adorable.

The International Service Program, run by Parks and Rec, were represented by two students from Chimborazo Elementary School. These kids and others across the city raised over $1,000 for facial reconstructive surgery for children around the world. They posed along with their teacher in front of one of those larger-than-life-sized checks. You don’t get much more adorable than a kid holding up a check bigger than he is, but let’s try. 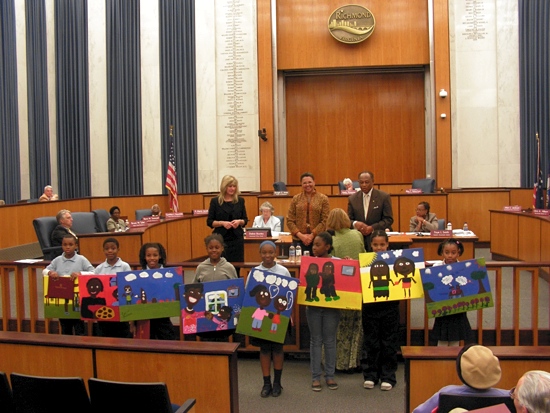 Next Council recognized Ms. Beth Noakes and her collection of 4th graders from Oak Grove/Bellemeade Elementary School. As part of a project on generosity, they read the book The Giving Tree. With the help of 9th graders from Collegiate School, each student created a painting inspired by the book, which was then turned into greeting cards that they sold to raise money for charity. The kids had quite a time posing with their pictures and passing out the cards to Ellen Robertson and Mayor Jones.

Other awards went to Affordable Housing Week and to Dr. Charles Price of the Sierra Club for his work on the Cannon Creek Trail.

Next up, Mayor Jones gave his presentation of the task force report on the Richmond Public School Budget shortfall. The Mayor made a number of points, including that the City funds the schools at a higher per-pupil rate ($5,728) than any other district in the area (e.g. Chesterfield at $4,368) and more than similar urban districts, like Newport News. “We are not getting the maximum return on our investment,” the Mayor said. “Four hundred and eighty-six kids from our entire school system went on to higher education. In Chesterfield, almost that many would be sent from a single high school.”

Among the task force’s recommendations were:

As with other cities and states, underfunded pension systems are a huge issue. To meet additional health care costs for pre-Medicare retirees, the Mayor proposed the following cuts to the city budget:

He claimed these savings and other cuts could be made without influencing classroom instruction. He asked for City Council support in approving these budget amendments. The task force will move on to look at long-term structural changes to the school system. Mayor Jones made these proposals with his usual aplomb. He is going to need it when the full hearing takes place. For the most part Council received this report with little comment. However, when the formal hearing comes up you can expect plenty of fireworks.

On a side note: Mayor Jones mentioned a recent kerfuffle regarding property tax notices being sent out late. Trying to get ahead of the issue, he is proposing a month-long grace period to allow citizens to get their payments in on time.

Council then went on to their usual business in amending the agenda, striking or continuing 14 of 41 items. When approved there were only 5 papers (excluding appointments) left on the Consent Agenda, and two papers on the Regular Agenda, including Charles Samuels’s proposal to prohibit random gunfire in the city. It is currently illegal to fire weapons on public property, but not to do so on private property. This is a fine distinction. In my neighborhood and many others, shooting weapons is considered a recreational activity, especially on the 4th of July and New Year’s Eve. A lot of homeowners can testify to the resulting holes in their roofs as the bullets return to earth. All in all, this was a no-brainer supported by the entire council, but considering the nature of the beast, it was put up for public discussion. Most of the dissension came not from the NRA, but from council gadflies whose complaints included lack of protection from the Richmond Police and the right of citizens to defend both life AND property. Teddy Parham urged women to get armed, go to the gun range, and to defend themselves against abusive boyfriends and husbands. The measure passed unanimously after brief Council discussion.

The same group of folks used the remaining agenda items to rail about their personal, if unrelated, causes, despite Kathy Graziano’s universally ignored pleas for speakers to stay on topic. It’s all part of the process, which fortunately took place after all the school kids had left the building. If Ms. Graziano wants to get serious about enforcing these rules, l suggest installing a trap door and a bucket of green slime. If this seems a little over the top, then you haven’t listened to these same ravings over and over again, week-in and week-out. Tonight was a bad night, even freedom of speech champion Marty Jewell was offended…and made a point of saying so.

Aside from this nonsense, Council accepted a $7 million Community Development Block Grant for affordable housing, home investments, emergency shelters and housing for AIDS patients and passed what remained of the Consent Agenda.

Council then went into closing ceremonies, including district reports and the traditional hawking of smoke detectors by Reva Trammell. Budget hearings continue into May, amendments will be voted on during the next Council session on May 14th. The final deadline for passage is May 31st.