Heated debate over the future of City Stadium erupted during last night’s City Council meeting. Two papers were up for discussion that planned to create a study of the stadium and the vacant GRTC lot on Main Street — though the stadium was the main focus of public comment.

Heated debate over the future of City Stadium erupted during last night’s City Council meeting. Two papers were up for discussion that planned to create a study of the stadium and the vacant GRTC lot on Main Street — though the stadium was the main focus of public comment.

“I am surprised and appalled by the notions that have been put into play by what seems like greedy developers who might think they know what’s best for our neighborhood without taking into account the wishes and the wisdom of the residents who live in the stadium district.” said Deanna Griffith, a resident of the Stadium District neighborhood.

Plans to turn the stadium into a mixed use development by Fulton Hill Partnership have been the bane of many Stadium District residents who would prefer to see the historic stadium be restored to its former glory.

Some of the residents at the meeting last night, including Griffith, called out Fulton Hill for using community rallying techniques, like going door-to-door with ‘misleading’ pamphlets, to exploit unsuspecting locals.

“I don’t count the psuedo-grass roots efforts that are being put into play by the developers using their calling networks and signed petitions.” said Griffith.

A recent Times-Dispatch editorial called for the Stadium District to become a “complete” neighborhood that offered places to live, work, learn and play. The article also suggested the prime “center of town” real estate could contribute “at a much higher level to the city’s tax base.”

But one resident at the meeting had the city’s tax rate as her top concern.

Jennifer Schockemoehl bought a house in the area 4 years ago and pays about 20% of her mortgage to city taxes.

“Wile I can afford that now, I’m concerned that development — houses for the wealthy and a huge office complex — would make the amount I’d pay in city taxes be too much.”

But she appreciated Council taking citizen comments into account.

“I know a lot of residents in the area are looking forward to more discussion and being involved in what happens with the stadium.”

A previous Council meeting voted to amend City Stadium development plan discussions to include input from the community.

Wile many citizens spoke in support of the measure to study the future of the stadium, others, like Paul Anthony, had questions concerning the current state of the structure. 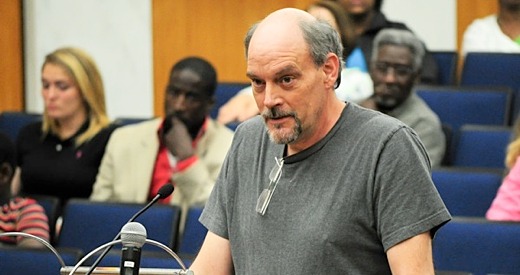 “For 10+ years the University of Richmond had been setting money aside to pay for a new stadium…Why has nothing been maintained in that time? Why hasn’t anyone been appointed to care for the stadium…” said Anthony.

The stadium is the current home of both the Richmond Kickers and the Virginia Hornets. Plans to improve the stadium would be a welcome plan to the respective teams, but the local high schools as well.

Darryl Bradley, The Hornet’s General Manager, was excited to hear local kids might have a decent place to play ball again, and was displeased with the idea of ripping the old stadium up. “Not to mention you’ll rob the children of this city of the chance to play in a real stadium, like in the old days. You should do what is best for the children.”

The ‘old days’ refers to when Armstrong High School had their games there.

According to Councilman Marty Jewel, many Richmond schools’ football fields are in a state of disarray. Either bleachers are broken or not present, lighting is inadequate, or any other number of issues bar a successful game of night football.

But Jewel hinted at a possible lead for upgrade aid.

“VCU’s director indicated strong interest…that they would be interested in upgrading the facility and they want our children playing on that field on friday nights…but we won’t know anything until the [VCU] Board of Visitors meets later this month.”

Jewel has been a vocal supporter of keeping the community involved in stadium plans. He recalled a meeting that reassured him of the publics demands.

“I went standing room-only meetings at the Carillon. Overwhelming the public declared ‘We want to keep this as a stadium!'”

Council unanimously voted to go forward with the study which will determine the maximum value of the space as a stadium.