Monday’s City Council meeting dealt mainly with taxes and enhanced penalties for gang and drug activity in designated areas. However, issues like the shooting in Tucson and continued debate over the slave burial ground in Shockoe Bottom were also brought to the table.

The meeting started with a few words from Mayor Dwight Jones. He stressed the importance of security for public servants in the wake of the Tucson shootings.

“I think its time for us to do a realistic assessment of our vulnerabilities,” said Jones. He then spoke of Richmond Police Chief Bryan T. Norwood being tasked with analyzing the safety of City Hall, reviewing security practices, and creating a greater police presence at meetings. There were noticeably more police officers posted as different points in the room.

“We must provide public access for this public building, and we also must realize we live in a society, and a state, and a city were someone can carry a gun into City Hall.” Said Jones.

Jones went on to encourage Council to continue the city’s tax amnesty program, delaying fees for tardy property tax payments. “We believe tax amnesty will lead to increased collection of revenue,” said Jones. “And that effort will be a foundation for future tax compliance.”

Originally instituted last year, the tax program gives people until April 15th to make their first payment. Citywide, property taxes total about $110 million in the first part of 2011. There is no agency dedicated to collecting the taxes; people pay the city directly, helping to cut down on costs.

The tax program was passed by a unanimous vote as part of the regular agenda. 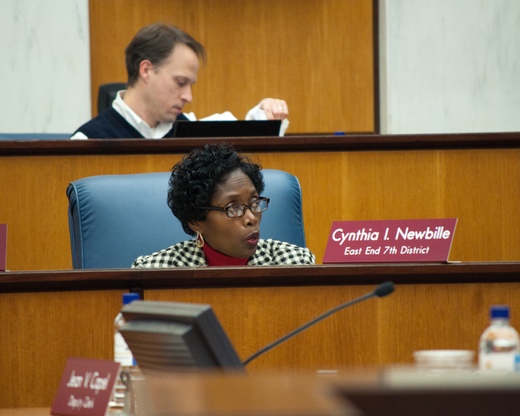 Councilwoman Cynthia Newbille (pictured above) sponsored a special resolution endorsing a General Assembly bill that increases the penalty for conduction gang or drug related activity within 1,000 feet. of housing designated for the elderly.

“The quality of living inside many of our facilities is being affected by whats going on outside,” said Newbille on proposed House Bill 2208.

The resolution was almost unanimously passed — except when 5th District Councilman Marty Jewell spoke up. He said these additional penalties would not be required if the problem was being addressed in the first place. “I’m concerned about when (these penalties) catch up to people who are least able to cope with these things.”

The measure to support the added penalties passed, with Jewell abstaining from the vote.

The public comment period arrived, and VCU student Maurice Robinson (pictured in the main image of this story) took to the podium. He held two scrapbook-like posters detailing the struggles of slaves, civil rights activists, and freedom fighters — black and white. He was there to remind Council of the slaves buried under a downtown VCU parking lot, and to push for action to commemorate them.

“I believe that it should not be a parking lot,” he said. “If all of us in this building believe in true equality and liberation, we should be outraged and get this VCU parking lot off this burial ground.”

The burial ground, located beneath a parking lot at Marshall and 16th street, has been a hot issue for some time. Gov. Bob McDonnell recently called for a better memorial for the burial ground, offering an amendment to the city budget that would allow Richmond to buy the land back from VCU for $3.3 million. At this time, cars still park in the lot, and no concrete plans to close the lot have been presented.

(All photos by John Garcia)