Last night’s city council meeting approved over a half a million dollars in federal funds for city programs, and rehashed new and old debates during the public comment period. Also, the future of the former University of Richmond Stadium was brought to light by Jaclyn Snow, a 5th district resident.

Last night’s City Council meeting approved over a half a million dollars in federal funds for city programs, and rehashed new and old debates during the public comment period.

With a unanimous vote, Richmond is on track to receive over $544,000 from the US Department of Justice Assistance. The funds come as part of a larger DOJA program to help city courts develop integrated treatment, transitional services, sanctions, and incentives programs for non-violent drug offenders.

The downtown slave burial ground was discussed by King Salim Khalfani, director of the Virginia NAACP. An outspoken advocate for the reclamation of the burial ground, Khalfani asked for the name of the city’s “Slave Trail Commission” to be change to the “Trail of Enslaved Africans Commission.” “African captives were never slaves.” Said Khalfani, “We were and are human beings who were held captive.”

The Slave Trail Commission oversees the reclamation of the burial ground and advises the city on the project.

He also asked that city meetings to discuss the problem be changed from 4pm to later in the evening as it was hard for some people to make meetings at that time.

Khalfani acknowledged the Virginia General Assembly’s willingness to put a budget amendment in to help with reclamation, and was confident that the process would begin soon. He did, however, take issue with the continued use of the land as a parking lot.

“We still want the CARS AND ASPHALT OFF OUR ANCESTORS. We do not go down to Hollywood Cemetery and pay to park our cars on Stonewall’s grave,” said Khalfani. “Every second those cars and asphalt are on our ancestors is a second too long.”

The future of the former University of Richmond Stadium, located behind Carytown, was brought to light by Jaclyn Snow, a 5th district resident (pictured below). The Richmond Times-Dispatch reported a proposal for developing the 82-year-old stadium was about to be submitted to the city, and Snow felt her community was not included in the discussion. 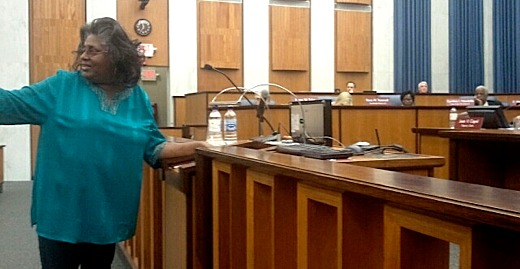 The 16.5-acre, $5.3 million property is city owned and had been used by UR under a lease agreement until last year.

Little is known about the proposal, though Councilman Douglas Conner told the Times-Dispatch it would “include a significant amount of retail, plus structured parking.”

Snow said her community’s concerns were with property values, traffic, and the lack of a new elementary school in the plan.

“This project does not benefit the residents… And let’s not even speculate about the effect this may have on the crime rate in the area.”

5th District Councilman Marty Jewell said has said he supports his constituents’ desires concerning the stadium, but asked that they attend a meeting this Thursday at 6:30pm at the Carillon where the issue will be discussed further.

The future of Monroe Park was the last topic for public comment. Peggy Sterling of the Metropolitan Community Church said public comments from the Monroe Park Advisory Council contradicted written statements in the plan.

“It has been stated by some members of City Council and the Monroe Park Advisory Council that we are addressing this issue early, as nothing has been decided yet. But I would like to point out that on page 99 of the Master Plan, “park wide renovations require the entire park to be shut off during the first phase of renovation…” said Sterling. “So there is written evidence that the park will be closed.”

“To our knowledge, our city reps have not read the Monroe Park Master Plan,” said Stickle. “We encourage you do so because you might be surprised what you find.”