Year of the Rooster: owners behind Café Gutenberg to start vegan food cart

Since Café Gutenberg closed last year, former owner Jen Mindell and her brother have been making plans to add a vegan food cart to Richmond’s ever-growing cartitecture. What food is planned, and why the siblings think food carts are on the rise in Richmond.

How about this: a vegan peanut butter Sriracha donut?

This is but one of the potential ideas for dishes that bounce around in the brain of Jen Mindell, former owner of Café Gutenberg. Her brother, Luke, is used to it.

“Every day she’s invented a new dish,” he says while the two of us chat over coffee at Lamplighter. “Food is what she does.”

While Luke’s sibling ties give him direct access to Jen’s creations, most of Richmond knows Jen’s food from Café Gutenberg, the Shockoe Bottom restaurant she purchased in 2008. In August 2011, Jen sold the restaurant amid unfavorable economic times, and since that time Jen and Luke have persistently readied their new venture: Rooster Cart.

Named after their “rooster” sandwich, a crispy red chili mock duck with cucumber and scallions, Rooster Cart will be the first vegan food cart in the city (the cart will carry mayonnaise by request only).

The siblings recently completed a Kickstarter fund raiser that netted the two over $6,000 in local donations. “It felt amazing,” said Luke of their funding initiative. “It really makes us feel like the community wants us.”

According to Luke, who moved to Richmond over a year ago to help Jen at Café Gutenberg, the two wanted to get past the “baggage” of owning a restaurant. “If you’re not making $4,000 to $5,000 per week, you’re in the red.” Not only does a restaurant rely on their quality of food for sustainable business, but also on the decor, waitstaff, cooks, and a myriad of other factors. The strength of the food cart is this: it cuts out these individual bits of overhead and allows the food to be enjoyed on its own merit. 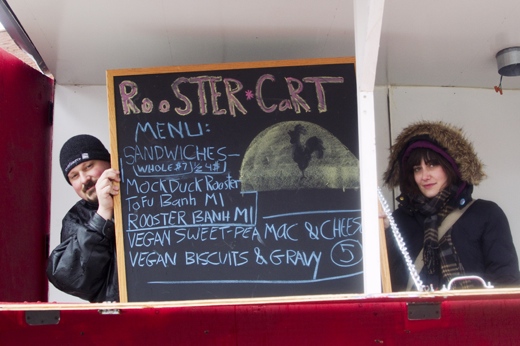 “We’re trying to cut out any pretense,” said Jen. The Rooster Cart will be much different than the 141-seat Cafe Guttenberg. “Simple. Bare bones. The focus is on the food.” Although both Luke and Jen are confident in Rooster Cart’s food quality, perhaps the biggest hurdle the pair will face will be to convince meat eaters to give them the time of day.

“We want to be there for the vegans,” said Luke, but he says “it’s even more satisfying to convince someone to eat vegan.”

Luke reminisces about a trial run that he and Jen undertook on New Year’s Eve outside of Café Ole in Carytown, where the two have been building and refining their food cart. “A lot of people would keep walking,” as soon as they heard that Jen only served vegan food. When the two began handing out samples, however, Luke says they started “winning people over.”

“There’s something about being able to cook for everyone,” said Jen, on maintaining a vegan menu. “People think they need a sandwich with meat to enjoy it.”

When asked about why there has been an increase in the number of food carts in Richmond over the last several years, Luke speculates that there are a couple of reasons. “People are starting to appreciate food for food’s sake,” he said. While there will always be those who want a classic restaurant experience, many value the direct transaction between chef and customer that food carts provide–free from prices marked-up to offset expenditures and tips for waitstaff.

Another benefit of the food cart is the minimal initial investment needed. Whereas a restaurant like Café Gutenberg might command a $500,000 investment, the Rooster Cart can start with $6,000 raised through Kickstarter–which funds equipment, a commissary, and any other start-up expenses. Jen feels that more and more chefs are “fleeing to simpler, more manageable” ways to deliver their food to the public. Food carts are a great way to do this without sinking large sums of money into the typically precarious restaurant business model. While there are many benefits to consolidating down to food-cart size, there are changes that will take place. 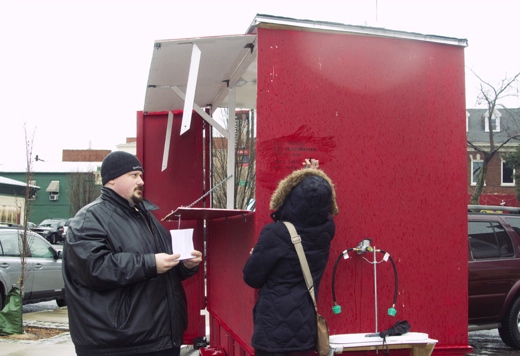 Moving from a full-sized kitchen to the confined space of a food cart will alter Jen’s cooking. “There’s an artistic element that I will lose in doing street food,” said Jen. “That doesn’t mean the techniques of fine dining are all thrown out,” Jen cautioned. “Just have to make it mobile.”

When Rooster Cart opens, Jen and Luke hope to offer five unique sandwiches. “We’re also listening to our customers,” she said. Many have asked that the cart carry a vegan Caesar salad. The logistics of carrying salad ingredients are challenging, to be sure, but something that Jen and Luke do not think is impossible.

Luke thinks that the future of really good food will come from food carts: “I think they’re going to be more common.” Luke would ultimately like Richmond to have a food cart pod, a dedicated area that houses several individual food carts. In one space, one could have access to Nate’s Taco Truck, Thai Cabin, and forthcoming carts like Rooster Cart and Proper Pie, Co. Luke is optimistic. “In ten years we might have an amazing street food culture.”

When asked about their longterm plans, both Luke and Jen hope to own a restaurant again, albeit one much smaller than Café Gutenberg. For the time being, Luke and Jen are focused on giving Richmond quality vegan food on the go, and as their first full day of street vending approaches, Luke is confident that they will do so successfully.

“We’re playing to our strengths.”