Someone who has cooked the meals of music’s biggest names while touring the world is about to give the city a unique taste of New Zealand. This Kiwi and his wife want to put pies on the map, to say nothing of putting them in our mouths. Who is this couple, and what exactly do they have planned?

Touring for as many as nine months out of the year, these world-famous musicians are like the rest of us in at least one way: they want a good meal at the end of the day. And Neil Smith probably made it for them.

For nearly ten years he’s cooked and prepared the meals for music’s most well-known acts and their road crews as they globe-hopped from country to country. “It’s a great job,” said Smith. Now Smith and his wife, Nikki, are working to serve Richmond slice upon slice of proper pie.

Smith, 40, grew up in Whangarei, New Zealand, a city in the northern most part of the country. He says that his parents worked in the hotel business and through that he “fell into kitchen work.” He’s self taught, building his expertise through experience rather than at a culinary school.

After moving to England 17 years ago, Smith added to his culinary experience by working in London restaurants–including those with Michelin stars. He eventually grew dissatisfied with restaurant life though he wanted to remain a cook. One day in 2003 a waitress told him about companies that toured with musicians to cook and prepare their food. This recommendation led to Smith attending an interview with west London-based Eat Your Heart Out catering. “Two days later I was on tour with David Bowie,” said Smith.

While the fame of these celebrities may strike most as being nearly other-worldly in scope, their food preferences were anything but. “They miss normal food,” Smith said. Instead of asking for the exotic the musicians for whom Smith cooked wanted their favorite dishes–Eric Clapton, for instance, favored a simple cottage pie. Musicians can sometimes visit as many as five cities in as many nights while touring, and this constant itinerancy, says Smith, makes them desire food that reminds them of home. “We cook comfort food.”

While touring with Nine Inch Nails, Smith met a local caterer and VCU graduate, Nikki Price. The two kept in touch and later married. Richmond is a “cool town,” says Smith–which means a lot considering that he’s been in more domestic and foreign cities than most visit in a lifetime. “I like the people here,” paying particular praise to the artist population. Cooking, he says, is “my form of art.”

Both cultivating and maintaining a marriage while touring for as many as seven months out of the year is a challenging proposition, and one that Smith and his wife don’t want to endure for much longer. This is where the pies come in.

“Pies in New Zealand are a subculture,” says Smith. Not only a subculture, but pies are ubiquitous for Kiwis: they are sold at convenience stores and even gas stations. While living in England, a place not unaccustomed to the pastry, Smith said that he “couldn’t find a good pie.” Finding one in the States proved to be even more challenging.

Not having lost his desire to cook and bake, but wanting to move away from a perpetually moving line of work, Smith and his wife have decided to launch a pie business in Richmond: the Proper Pie Co. 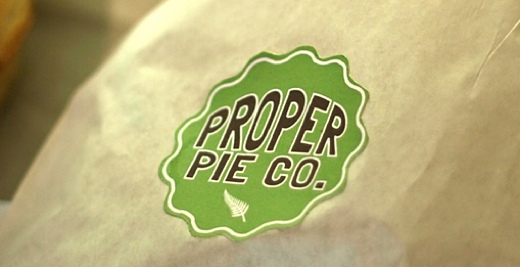 Americans typically think of pies as being sweet dessert fare, but the pies of New Zealand that Smith pined over make for a savory lunch or dinner. In fact, one of the biggest challenges to the new venture, other than finding the time and money for starting a business, is how most people think of pie. The couple is tasked with “changing people’s perceptions about pies.” They have to move people away from the idea that pies are only dessert options–others certainly think that they can do so.

In October, Bon Secour’s underwritten Supporting East End Entrepreneurship Development program (SEED) awarded the couple $10,000 to help the couple finance a shop in Church Hill. Smith and his wife are now actively looking for a location.

Smith said that they also hope Proper Pie Co. will have a food cart out and about in Richmond proper by February–“We’re going to start with farmers’ markets.” They also hope to be a vendor at next year’s Folk Festival.

As to their brick and mortar location, Smith envisions an “old-fashioned pie shop” serving a range of eight-to-ten seasonally-appropriate meat, vegetarian, and even vegan pies. Sitting at a counter, patrons will also be able to drink milkshakes and homemade sodas.

A long-term goal is for Proper Pie Co. to distribute their pies across the country, “We want to compete nationwide.” Smith’s ambition doesn’t stop there. “Ultimately, I would love to own my own restaurant.” The more pressing goal, however, is to find a space in Church Hill.