What’s starting out as a pretty dreary weekend will turn pretty awesome pretty quickly. Warm and humid by Sunday? Absolutely!

Though we’re still behind our average rainfall total for the year to date to the tune of 2.34”, our drought status has been improving. According to the latest update to the US Drought Monitor released yesterday, no portion of the state remains in moderate drought status. While the parts of the state, primarily east of the Blue Ridge and south of the Rappahannock River, still remain in an abnormally dry state, this represents a significant improvement compared to most of the past year, when at points some parts of the state were considered to be in extreme drought. 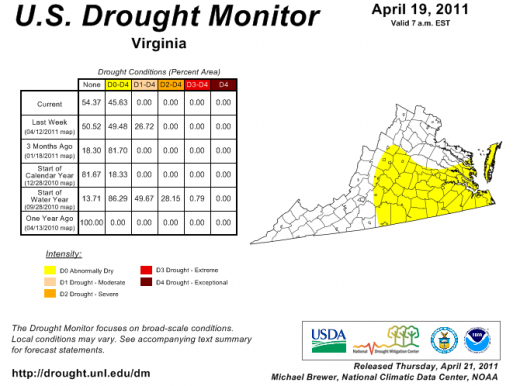 I suppose it’s appropriate that I’m writing about it on a dreary day such as this. High pressure centered over southern New England is responsible for the easterly winds, overcast skies, and rain showers that we’re seeing today. The rest of Friday will stay pretty similar. We’ve pretty much hit our high for the day here in the mid 50s. Lows tonight will drop down to near 50, with continued overcast skies and the occasional shower.

Squirrelcast (vs. Altoona, 6:35pm): I don’t think the rain moving through the area currently will be enough to rain out tonight’s game, but it won’t be the best night for baseball. That said, plan on temperatures in the low 50s for most of the game. Overcast skies will persist through the night, and the chance exists for a shower or two during the game.

We’ll see some improvement after a warm front passes through overnight. We’ll likely see some continued light showers through early Saturday morning, diminishing mostly after midnight. Sun will start to peek through some of the breaks in the clouds, and temperatures will get back to the upper 70s during the afternoon. Clearing will continue through the evening hours, as lows only fall into the low 60s overnight.

Squirrelcast (vs. Altoona, 6:35pm): Although skies will still be in the partly to mostly cloudy range, the chance for rain is nil. Temperatures will be in the mid 70s around game time, dropping to near 70 by game’s end.

Conditions continue to improve on Sunday, as partly sunny skies send temperatures back into the low 80s. An approaching cold front will increase the chance for some scattered thunderstorms in the afternoon and evening hours. Otherwise, it’s going to be a beautiful end to the weekend. Low temperatures will again fall into the low 60s overnight.