Weather! The sun is a mass of incandescent gas…

…that might be making an appearance here this weekend.

…that might be making an appearance here this weekend.

Before I start talking about what to expect for the rest of the weekend, here’s a reminder. Set your clocks ahead Sunday morning! 2am is the magic hour. Also, don’t forget to check the batteries in your smoke and carbon monoxide detectors, and it can’t hurt to check out your NOAA weather radio (if you have one).

The good news is that most of the rain has let up, for now. The flood watch that was in effect for today has been cancelled. We’ve received 1.21 of rain since the 11th; this isn’t statistically significant by itself – the record for this two-day period is over 3.5” – but when paired with ground that’s still partially saturated from melting snow, especially across the mountains where there’s still some snowpack that has melted with the last rain, we’re looking at some flooding issues with the area’s major rivers in the Chesapeake drainage basin. There’s forecast to be flooding along the Shenandoah River in West Virginia and Maryland, with some of the stations near the headwaters already reporting higher river levels.

Here’s the current reading for the James River at the Richmond-Westham gauge, which is located just upstream of the Huguenot Bridge. 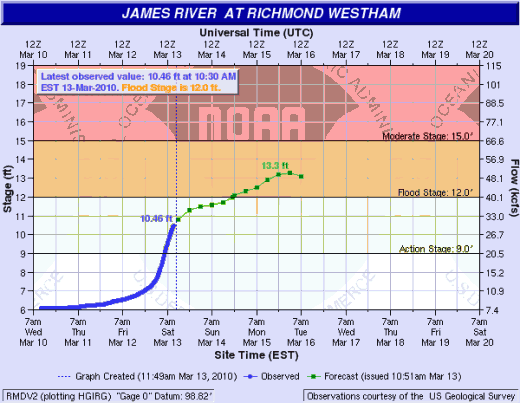 The river is currently at 10.46ft, and is forecast to exceed flood stage (12.0 feet) around 7pm tomorrow night. The current forecast for the river (marked in green on the above image) has it set to crest at around 13.3 feet Monday evening, before beginning to recede. Damage should be neither significant or extensive, but if you have property on low ground anywhere along the river near Richmond, make sure you take steps to protect it.

The rest of the weekend and Monday
The upper level low pressure system that’s been kicking up all of this fun weather the last few days is now pulling dry air in from the southwest, which means that the clouds will clear out some, making way for some actual blue sky! I’m not ruling out the chances for some more stray showers, especially overnight tonight into Sunday morning, but I don’t think they will be particularly heavy. The Storm Prediction Center isn’t ruling out the chance for a stray thunderstorm as some of the clouds dissipate and solar heating causes some atmospheric instability, but the chances for that are very small. Don’t be surprised if you do hear some thunder, but don’t be surprised if you don’t, either. Temperatures should stay about where they are (it’s currently 62 at the airport), dropping into the low-mid 40s overnight. Sunday’s looking like a repeat of today, with temperatures in the upper 50s instead of the mid 60s. Monday’s looking similar as well: cloudy with chances for some stray rain showers, and temperatures cooling slightly compared to Sunday.