A strong area of low pressure moves into the Ohio Valley and the Mid-Atlantic on Friday, threatening most of the region with severe weather Friday afternoon and evening. However, fantastic weather returns for the weekend.

First up – the National Hurricane Center has issued its final advisory on Tropical Depression Beryl. The storm was absorbed by the passing cold front that moved through eastern Virginia on Wednesday. 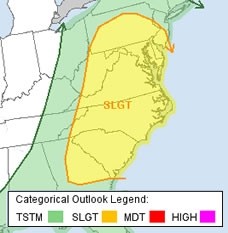 Storm Prediction Center severe weather outlook for Friday. (Image credit: Capital Weather Gang/Washington Post)Friday: Our focus now shifts to an area of low pressure in the upper levels of the atmosphere moving through the Ohio Valley tomorrow. As it moves toward the east coast, a strong cold front attached to this low will kick of thunderstorms across the Appalachians and into the Mid-Atlantic. The Storm Prediction Center has classified the Mid-Atlantic region in a slight risk for severe weather on Friday.

We’ll spend most of the day under partly to mostly sunny skies, with high temperatures near 90 tomorrow. Abundant sunshine and surface heating will likely trigger some discrete, single storms ahead of the front. As it approaches, these will morph into multicell storm clusters and linear storms. This evolution means that the biggest threat from these storms will start out as a hail threat, with hailstones up to an inch in diameter or larger possible. As the storms transition to a linear mode, wind gusts, especially along the leading edge of the storms, becomes more of a concern. This transition won’t happen until later in the evening, likely after the 5-6 p.m. timeframe.

Last night, linear thunderstorms moving through Oklahoma produced a gust front that resulted in 60mph wind gusts up to 25 miles ahead of the actual storms! Pay attention to and heed any warnings issued, and keep in mind that there are times when the most dangerous parts of the storm don’t correlate with the brightest colors on the radar.

The other concern with this system is the threat of some isolated tornadoes with some of these storms. While this threat appears to be mostly limited to northern Virginia, Maryland, and southern Pennsylvania, it cannot be ruled out for eastern and central Virginia as well.

Now is the time to review your severe weather plan and supplies with your family or business, and make sure you are prepared in the event severe weather strikes.

Friday Squirrelcast (vs. Erie, 6:35pm): The concerns about severe weather will extend to the baseball game as well. Temperatures will start out in the upper 80s, but will likely be cooler if storms have developed in the area. Heavy rain, lightning, wind, and hail are all a possibility through the evening hours. Assuming the game is only delayed and not postponed, look for temperatures in the mid to upper 60s by the time everything wraps up.

Saturday: Clouds behind the cold front will disperse in the morning hours, as high pressure builds in behind. Temperatures will be 10-15 degrees cooler than Friday, only peaking near 75 degrees. Low temperatures slip to 60 overnight under clear skies.

Saturday Squirrelcast (vs. Erie, 6:35pm): Take Friday night’s forecast, and then take the complete opposite of it for Saturday night. Expect temperatures near 70 at first pitch; great weather for both baseball and weddings. Temperatures will be in the mid 60s by the 9th inning under clearing skies.

Sunday: Slightly warmer, but similar to Saturday. Look for highs closer to 80, slipping back into the low 60s Sunday night and partly to mostly clear skies all day.

High pressure looks to stay anchored over the eastern US into next week, keeping skies clear and temperatures cooler than average. A weak disturbance or two may bring some opportunities for some rain next week, but otherwise we’re going to kick June off with some glorious spring weather.