Severe weather has caused damage across the southeastern plains and gulf coast over the last 48 hours. Our turn is Saturday.

A WLBT-TV viewer near Clinton, Mississippi captured this photo of a strong tornado earlier this morning. A gold star goes to anyone – and everyone – who can tell me what’s wrong with this photo. 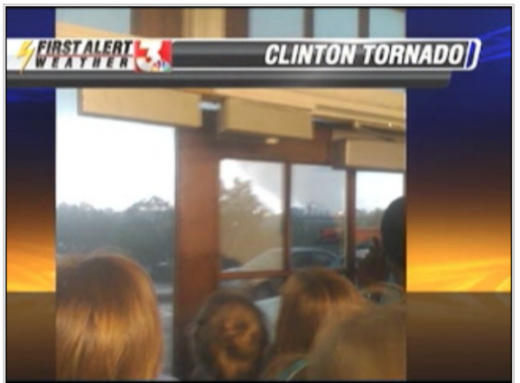 Speaking of severe weather, we’ve got the threat for severe weather in our very near future. Expect cloudcover to begin to increase through the evening hours tonight, as a warm front associated with the low builds to the east. We’re already seeing overcast skies here in Blacksburg, and visible satellite shows this trend continuing eastward. Plan on low temperatures tonight in the low 50s.

Rain showers should build across the area in the morning hours of Saturday. We’ll see some widespread areas of rain before some breaks in the afternoon. Any breaks in the clouds and additional sunshine will provide some additional fuel for thunderstorms that afternoon. Expect some popup showers and thunderstorms – possibly severe – before the storms coalesce into a fairly large squall line blowing east from off the Blue Ridge. The threat for severe weather exists with these storms, including damaging wind gusts, hail greater than one inch in diameter, and the possibility for an isolated tornado, especially as you get closer to the VA/NC border.

For those reasons, the Storm Prediction Center has placed eastern and central Virginia into an an area with a slight risk of severe weather tomorrow.

High temperatures tomorrow will be very dependent on the clouds; with more sun, we’ll get well above 70, without as much sun 70 might be a challenge. Strong winds out of the southeast will be an issue all day long, until we see the cold front finally pass through the region tomorrow evening. Once the front passes, the wind will drop off and the clouds will start to clear out. Overnight lows will be near 50.

By the time Sunday morning rolls around, we’ll be back to partly to mostly sunny conditions, with highs in the low 70s and overnight lows in the upper 40s.
High pressure setting up over the region will keep conditions clear into the first part of next week.

For those of you with plans this weekend, I hope they’re not completely washed out by tomorrow’s weather. My next update will be Monday morning.