Weather! One arctic blast you won’t find at Sonic

Climatologically speaking, we’re at the coldest point of the year, and we’re definitely going to feel it this weekend. There’s more than just a chill in the air.

So, I’ve got a little bit of good news – at least, I think it’s good news. Climatologically speaking, we’re at the coldest point of the year. The average temperature for each day from January 5 -26 is 45 degrees. From January 27 on, the temperature continues to climb. By the end of February, it’s up to 53, and peaks at 88 during the second half of July. Now, that doesn’t mean that it won’t get any colder this winter; the average temperature is just the statistical mean for the period from 1971 to 2000.

Unfortunately, with the less bad news comes the slightly worse bad news – Virginia’s back on the radar of the US Drought Monitor. The central 80% of the state, excluding only far southwest Virginia, who has been able to benefit from copious mountain snowfall, and the eastern shore and Chesapeake bay shore, which have certainly seen their fair share of snow this winter. The Drought Monitor has classified the remainder of the state as “abnormally dry,” the lowest drought classification. 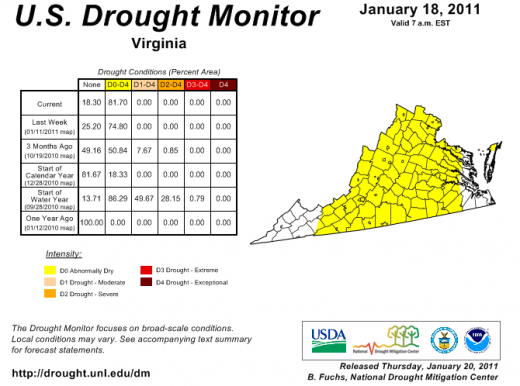 Tonight, an area of precipitation is crossing the Appalachians, falling apart in the process after losing most of its moisture across the Ohio Valley. A few weak rain showers will likely be all that materializes; it’s possible that there will be some snowflakes mixed in, but little to no accumulation is expected. Sorry kids, but I think you’re going to school tomorrow.

A strong cold front will follow behind during the day Friday, bringing a mass of arctic air behind it. Temperatures will drop through the day as the front passes. Winds have already picked up here in Blacksburg, gusting to 20 miles per hour or higher tonight. The warmest temperatures of the day are happening now, peaking in the mid 40s, and will drop sharply by sunrise, falling to near 30 by 10am. Winds will be gusting in excess of 20 miles per hour through today, meaning Richmond will be seeing wind chills in the teens. Definitely not the best way to kick off a weekend. Temperatures overnight will fall even farther, reaching near 20 by Saturday morning, though winds overnight will drop to less than 10 miles per hour. keeping wind chills around 10.

Highs Saturday will struggle to reach 30, despite an area of high pressure and a dry airmass over the region. A light breeze will persist through most of the day, and overnight lows will be in the low 20s. Any lingering cloudiness over the area will depress temperatures even further during the dayl We’ll start to warm up some on Sunday, with temperatures climbing back into the upper 30s, and overnight lows back in the mid 20s.

I’m keeping an eye on the next system to approach our area Monday and Tuesday. There’s still a bit of divergence among the various model solutions, but based on what we’ve seen already this winter, I wouldn’t be surprised to see another system transition from snow to a mix to rain. However, that’s not the only solution, and I can’t really say with a lot of certainty what to expect quite yet. I’m going to keep an eye on it, and will have an update over the weekend.