The latest drought update is out, and it’s not looking good.

This week’s US Drought Monitor is out, and the picture for Virginia isn’t much prettier than it was last week. In fact, it’s looking a bit worse. 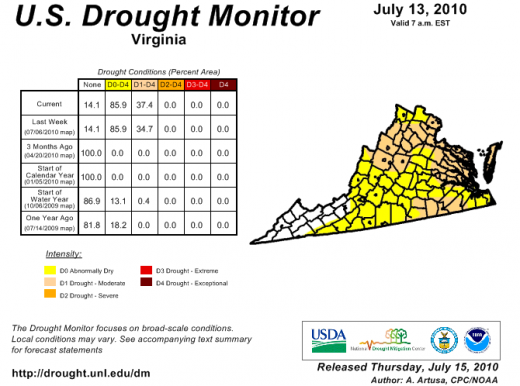 Over 37% of the state is experiencing moderate drought conditions, up from just 34% a week ago. More than 85% of the state is experiencing abnormally dry conditions. The good news is that this number hasn’t changed since last week. Several rounds of thunderstorms, especially over the western half of the state, have kept dry conditions from spreading any further. At Richmond International, we’re currently short 5.26” for the year. We’ve only received 1.42” of rain since June 1st, 4.30” short of average.

Friday is a Code Orange air quality day for the Richmond metro area. Code Orange means that the air quality will be unhealthy for sensitive groups, such as children, the elderly, and those with respiratory ailments. Take it easy outside and don’t overwork yourself. Today’s going to be a hot one for everyone, as temperatures are expected to climb into the upper 90s. Humidity values are way up (shocker!), making today hot and sticky all the way around. A cold front approaching the area this evening will bring a minimal chance of some evening showers and thunderstorms. Lows tonight are only going to get into the upper 70s at best.

Friday Squirrelcast (vs. Bowie, 7:05pm): Hot hot hot! Temperatures at game-time will be in the upper 80s, cooling only to the mid 80s by the ninth inning. There’s the chance for a stray shower or thunderstorm during the game, but it’s a very small chance.

The cold front passes through on Saturday, but only makes a small dent in our temperatures. Highs will only hit the mid 90s (compared to Friday’s upper 90s), but continued high humidity will keep things sticky. The instability brought by the front will again bring the chance of some afternoon or evening showers/thunderstorms, but they will still be very limited at best. Low temperatures Saturday night will fall into the low 70s.

Saturday Squirrelcast (vs. Bowie, 6:35pm): We’ll again see a small chance of evening showers and storms. First pitch temperature should be in the upper 80s, cooling to the upper 70s by game’s end.

As the cold front moves to the south on Sunday, the atmosphere stays warm but becomes slight more stable. We’ll have highs again in the mid 90s with typical summertime humidity values. Lows Sunday night should again fall into the lower 70s. I’m going to mention that there may be a very small chance of some showers and/or thunderstorms into the evening on Sunday based on some of the model outputs, but I don’t think we will see much.

Sunday Squirrelcast (vs. Bowie, 5:05pm): One more (albeit small) chance of some evening showers or storms, but don’t let that keep you away from The Diamond. Temperatures in the first inning will be in the lower 90s, dropping into the lower 80s by game’s end.

Looking ahead, there’s not much of a change in the pattern, which means that we’re not going to have much of a chance to make a dent in our rainfall deficit. I’ll have an early-week update on Monday.