Weather! Lee dissipates, but in name only

Keep that umbrella handy, and maybe a boat, too…

Tropical Storm Lee is no more, having lost its tropical characteristics overnight. Don’t let that mislead you, though; the question with Lee was never about the surface winds, or where the center of the low would go, but has always been about rain. Specifically, how much? What remains behind is a potent area of low pressure spinning near the Gulf Coast, and interacting with a slow-moving cold front, pulling in buckets and buckets of moisture from the Gulf of Mexico. 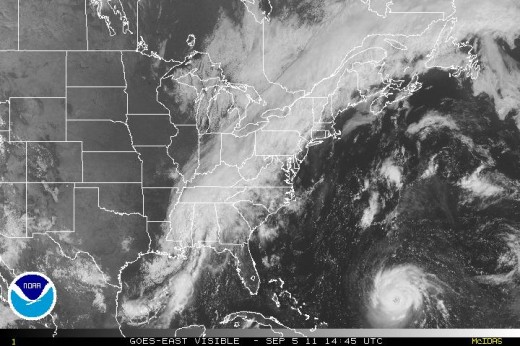 You can see the reach of this front in this GOES visible satellite image from this morning. Hurricane Katia, in the bottom right, continues to slowly trek to the northwest.

The good news is that Katia is going to turn to the north well east of the Atlantic Coast, and doesn’t appear to be a direct threat to the United States or Bermuda. However, coastal areas will feel Katia’s effects in the form of increased surf and strong rip currents, especially as the storm makes its closest approach to the US over the next several days. By Friday and Saturday, Katia will begin to turn to the northeast and increase in forward speed, moving off towards Greenland and northern Europe.

Lee, or more appropriately, Lee’s remnants, are going to be another story. In fact, they will be the weather story for most of this week.

Today’s been relatively nice so far. Clouds will continue to increase this afternoon as the frontal system crawls across the Appalachians. The cloudcover is helpful though, because any limits we get on sunshine today will help keep any thunderstorm chances to a minimum. Already there are some storms developing in advance of the front across northeastern North Carolina and into far southern Virginia near Emporia.

The rain will pick up in intensity later as the front moves east. Plan on a high temperature of 85 this afternoon, before lows drop to near 70 overnight.

Rain will be on the menu for most of Tuesday as well. The front will stall out across Virginia and the Carolinas, meaning a prolonged period of rain showers throughout the next couple days. We’re looking at 2-3” of rain total by Tuesday night.

If rainfall continues as forecast through the week, we may be looking at some pretty serious river flooding concerns along the James in the coming days. This forecast is heavily dependent on how much rain we receive, but the James could be close to flood stage by Wednesday or Thursday. 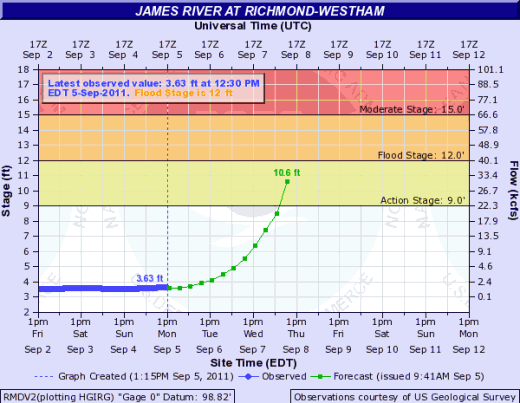 Unfortunately, the rain is going to continue into the middle of the week. Hope you like your holiday-shortened weeks a bit on the soggy side.