Tropical Storm Irene (likely Hurricane Irene by the morning) is a serious player, and interests along the southeastern Atlantic and Gulf coasts need to continue to monitor the storm’s progress towards the United States.

Irene continues to be classified a tropical storm as of 11pm Sunday night, but likely by the time you read this, it will have been upgraded to a hurricane as the system approaches Puerto Rico.

Irene has a very impressive satellite presentation tonight. The convection is very balanced around the center of circulation, and the deep reds indicating very cold cloud tops tell us that there’s a lot of activity around the heart of the storm. Irene will likely weaken somewhat as the center of circulation interacts with the northern Puerto Rico coast, but there’s very little doubt that Irene will intensify again with plenty of warm water to fuel further intensification once it clears the island. 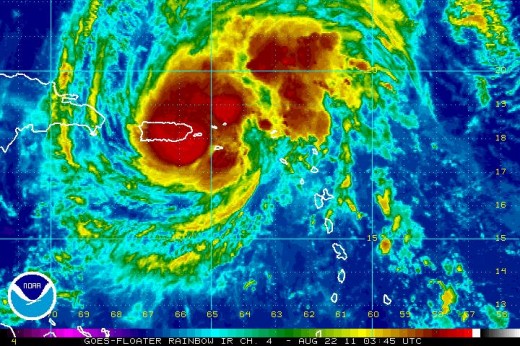 There’s been a consistent northerly component to Irene’s motion as the storm continues to track to the west. Model guidance and the NHC forecast have both shifted east in response; as best as the National Hurricane Center can estimate, the storm will be near the east coast of the US by Thursday evening. There’s still a lot of room for error in this forecast — the average forecast track error for 5 days out over the last 5 years has been 250 miles. Also remember that the forecast track is only for the center of the storm, and wind and rain effects can reach for hundreds of miles in any direction from a storm.

Right now, the key thing to know is that anyone with interests from the Virginia coast south to Florida and then west along the Gulf of Mexico needs to continue to monitor Irene’s progress. Now is the time to review any necessary hurricane evacuation plans and supply kits, and to prepare to be ready to go in the event hurricane watches or warnings are posted or evacuation orders are issued. We haven’t had a hurricane make landfall in the United States since 2008, and it’s very easy to become complacent when it comes to hurricane preparedness. Take advantage of this time and make sure you aren’t caught unprepared.

When it comes to Irene and potential non-coastal Virginia impacts, the key word has been “drought-busting.” I’m not necessarily on that wagon, partially because of semantics: 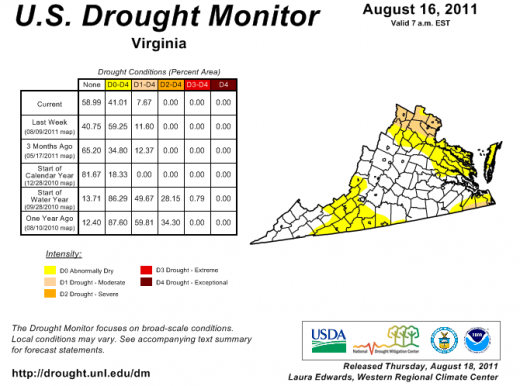 Most of Virginia, at this point, is drought-free. That being said, there’s been a bit of a drying trend over the last few weeks across central Virginia. Our annual rainfall deficit is back to almost 5 inches, and there’s some rumbling about the return of voluntary water restrictions in some parts of the region. With any luck, Irene will help reverse that trend. If (and that’s still a big if at this point) Irene makes landfall along the North Carolina coast and tracks up I-95 towards central Virginia, we would likely see threats that include an extended period of high winds, heavy rain bands with embedded thunderstorms and tornadoes, and both flash and river flooding possible.

Speaking of rain, a clearing cold front will bring a chance of some brief showers to the region early Monday morning. Behind that, however, lies gorgeous weather for both Monday and Tuesday. Skies will clear following the front’s passage, and we can plan on highs both days in the upper 80s and overnight lows in the lower 60s. Hard to ask for anything better than that in late August.

Irene’s progression will dictate my update schedule for the next few days. I’ll have another forecast update on Wednesday.