As for Richmond this weekend, it’s going to be fantastic. A weak cold front passed through the area overnight, and now another area of high pressure will be the dominant weather feature for the weekend.

It’s Friday, and what a busy Friday it is. 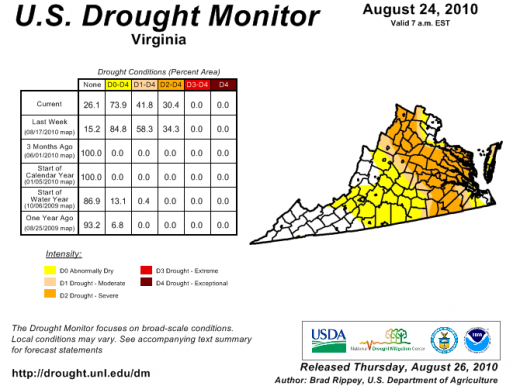 While most of the the eastern third of the state is still under a Severe Drought, last week’s rain did finally make a bit of a dent. That being said, we’re still almost 7” short for the year, which hasn’t helped this year’s growing season at all, and did significant damage to this year’s corn crop. The USDA publishes a weekly state Weather & Crops report, and the comments from across Virginia are similar; the recent rains have been too late to help the corn harvest, but were timed well for other crops like soybeans and that ever-important pumpkin crop. All is not lost. We still need several days of good, soaking rain to make a severe dent in the defiicit…perhaps from a tropical event?

Which makes for a great segue – the Atlantic is approaching the peak of hurricane season, and things are getting active in a big way.

Hurricane Danielle rapidly developed overnight, strengthening from a storm that was struggling to maintain category two intensity yesterday, to category four in the Saffir-Simpson Hurricane Wind Scale today, with maximum sustained winds of 135 miles per hour.

Danielle is tracking towards Bermuda currently, and then forecast to turn northeast and out to sea. In the meantime, Danielle’s intensity is going to bring high surf along the Atlantic coast, along with a threat of strong rip currents until well after the storm passes.

Following Danielle is Tropical Storm Earl (and I promise to make absolutely zero “My name is Earl” jokes).

Earl is going to require some watching. It’s too early to say exactly what the storm will do after it skirts the Caribbean – there’s still a large area of uncertainly with days 4 and 5 – and an even large area following. The average forecast track error at 3 days is 300 miles, which means that anyone with interests along the East Coast needs to monitor Earl as it continues to develop and track westward.

As for Richmond this weekend, it’s going to be fantastic. A weak cold front passed through the area overnight, and now another area of high pressure will be the dominant weather feature for the weekend.

Friday and Saturday will likely be the coolest, with highs in the upper 80s. As with most of the weekend, partly cloudy skies and very little threat of rain showers will be the story. Overnight lows both night will fall into the low 60s under clear skies.

The heat we’ve come to know, but maybe not love, this summer is back on Sunday, as temperatures climb back into the low 90s. This may be hard to believe, but we haven’t seen a high temperature of 90 since the 22nd; it’s likely that it will be an entire week before we see temps back in the 90s. Again, clear skies overnight will result in lows in the mid 60s.

It’s going to be a great weekend to get out and enjoy the last few vestiges of summer. Meteorological summer ends on August 31, so there’s not much left. I’ll have an update on the tropical situation, as well as the forecast for the beginning of the week on Monday. (Here’s a hint: it’s a three letter word that starts with ‘h’ and and ends with ‘t’.) Enjoy your weekend!