It’s been a busy past few days; we’ve had some exciting thunderstorms, and the National Weather Service has announced some interesting climate information related to this Spring.

It’s been a busy past few days; we’ve had some exciting thunderstorms, and the National Weather Service has announced some interesting climate information related to this Spring. 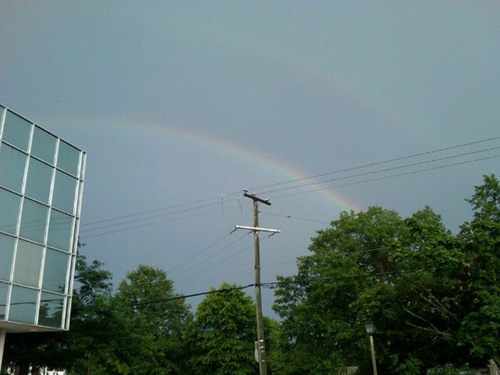 If you look above the the rainbow across the center of the image, you can see the faint outline of a double rainbow, caused when light is refracted not once, but twice, within a rain shaft. It’s hard to make out in the picture, but the colors in the faint outer rainbow are actually reversed compared to the inner one.

Regarding this Spring, the National Weather Service announced that the average temperature for the period of March – May 2010 was the warmest for this period on record. There is one important caveat that the NWS also points out: relative to other sites in the area, the location at Richmond International Airport has consistently been recording warmer nighttime low temperatures over the last 10 to 20 years. This has been attributed to expansion at the airport, and an increase in concrete and asphalt surfaces near the instrumentation. These surfaces keep nighttime temps milder than they would be otherwise, and since nighttime lows are half of the average temperature, this can have an impact on climate records at the site.

Tuesday also marked the beginning of the Atlantic hurricane season. Be sure to check out my most recent Ask Weather Dan where I discuss this hurricane season and where you can share your memories of years past in the comments.

As for this weekend, Friday marks yet another hot and humid day. Temperatures will again top out near 90 degrees, meaning you’ll get another sticky day for your excursion to the Greek Festival, First Fridays, Innsbrook After Hours, or any other of the numerous events happening around the area. The heat and humidity mean there’s another chance for evening popup showers and thunderstorms, though the risk compared to Thursday remains relatively small. Temperatures Friday night drop into the low 70s.

The pattern continues into Saturday, where – surprise! – another hot and sticky day is in store. A weak frontal system passing through the area won’t bring any relief, but will contain more energy to initiate storms. Highs in the low 90s will prevail, and we’ll have another chance of strong to severe storms into the evening hours. Low temperatures Saturday night again only fall to near 70.

Cooler and drier weather takes over for the beginning of next week. I’ll have your next forecast on Monday. Enjoy the weekend!