Monday will be mostly wet, as moisture from the Gulf of Mexico is pulled along a stationary front parked over southeastern Virginia and eastern North Carolina by an area of low pressure over the Tennessee valley.

What’s that? If I didn’t know any better, I’d wager that those sounds I’m hearing are all of Richmond clamoring for the return of the 90-degree weather we saw all summer long.

Luckily for you, I know better.

Only a trace of precipitation has officially fallen at the Richmond airport as of 11pm Sunday night, but that total will increase in the overnight hours Sunday night. The front’s timing was a little slower that I anticipated, and that allowed temperatures to climb into the low 80s, and from what I read on Twitter, made for a fantastic day before the rain moved in.

Unfortunately now the rain is here, and it’s not going anywhere for a couple days. The rain here in southwest Virginia has been falling since about midnight Saturday night; some locations have already received in excess of 2 inches. The rain will be helpful for crews fighting two forest fires in Bath and Augusta counties, which have burned 115 and 150 acres respectively, based on reports from the US Department of Forestry. Unfortunately, with all the rain in the mountains, river flooding is going to begin to be an issue over the next few days as well. The current forecast for the James River and Richmond-Westham keeps the river below flood stage, but this is subject to change, especially if more rain is received in the James River basin than is forecast. 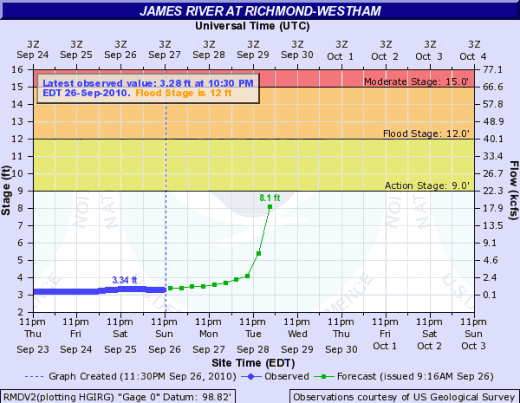 So what is in store for Richmond?

Monday will be mostly wet, as moisture from the Gulf of Mexico is pulled along a stationary front parked over southeastern Virginia and eastern North Carolina by an area of low pressure over the Tennessee valley. Daytime heating will get the temperature up into the upper 70s, though overcast skies and light rain will be predominant through the day, with periods of heavy rain possible at times. Lows Monday night will drop only to about 70.

While most of the rain will fall on Monday, it will continue through the morning hours on Tuesday. The models are mostly in agreement about the rain’s duration, continuing through the morning hours and beginning to taper off in the afternoon, before finally moving out of the area through the night. Highs again will approach 80 degrees with mostly cloudy/overcast skies. Cooler air filtering in behind the low as it moves out will drop temperatures into the low 60s overnight Tuesday night.

Another coastal system looks to bring us more rain later into the week, though the models are having trouble figuring out exactly what to do with it as of yet. Plan on some more rain in the Thursday-Friday timeframe, and possibly some cooler temperatures behind that. I’ll have an update on Wednesday.