Weather! Another week of sunny and mild

It’s the start of another warm, beautiful spring week. Temperatures are slightly milder this week, especially tonight and Tuesday. The chance for some rain – along with some thunderstorms – returns Wednesday evening.

…not that there’s anything wrong with that.

I’ll try to mention this periodically as we get closer, but I figure now’s a good time to start. 2012 has gotten off to a busy start in terms of severe weather, and the National Weather Service relies on ground truth reports from trained spotters to help corroborate what they’re seeing on radar and through other observations in the office. The SKYWARN program is a great way to get involved if you’re a weather enthusiast. Training classes are coming up in the next two months; there are basic classes in Mechanicsville (April 4), Petersburg (April 10), and Chesterfield (April 19), and an advanced class in Henrico on May 22. For more information including how to register, please see the NWS Wakefield SKYWARN page.

It’s been an active – and wet – weekend, thanks to an upper-level low pressure system that’s cruised across the Mid-Atlantic over the weekend. It’s finally moved offshore today, and strong northwest winds have moved in behind the low. I’m generally a fan of northwest winds, especially in eastern Virginia. The winds come off the eastern slopes of the Blue Ridge; this descending air warms and dries out, and Richmond gets to reap the benefit in the form of warm weather and clear skies. We did set a temperature record over the weekend. The low temperature on Saturday* was 59 degrees, which is a record warm low temperature. The old record was 57, set in 1994.

We are still dealing with some of the after effects of this weekend. The National Weather Service has issued a flood warning for the James River at Westham. The river is currently at 13.6 feet, and will slowly begin to recede over the next two days. The gauge used to track the river level at Westham is just upstream of the Huguenot Bridge. There’s a note on the NWS page for the river gauge about a temporary dam downstream of the gauge enhancing flooding effects at and upstream of the gauge. I’m assuming this is related to the Huguenot Bridge replacement project, but I’m checking with VDOT for more information. The river is going to take its time receding as a result of this, and should remain above flood stage until early Wednesday. 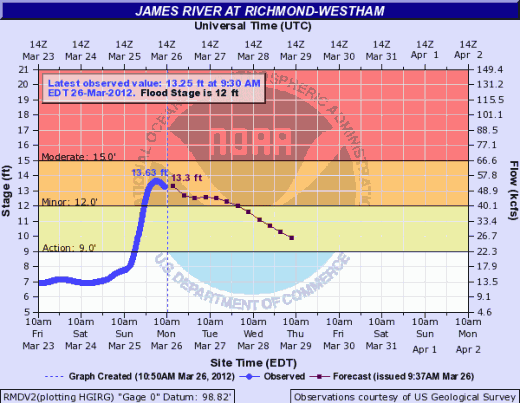 Thankfully, we’ve got some gorgeous, if somewhat cooler weather, to carry us through the first half of this week.

Monday: Sunny skies today are allowing temperatures to climb even faster than forecast, and we’ll make it to 70 this afternoon. However, winds are gusting to almost 30 mph this afternoon, keeping it cooler than it would be otherwise. Temperatures drop quite a bit this evening, thanks to a weak area of high pressure that’s going to set up today and filter in some cold air from Canada, dipping into the low 30s.

The extra-warm early spring has meant lots of plants have begin growing earlier than they might otherwise. Temps in the low 30s can cause damage to these plants, so make sure to take care of them overnight tonight. We’ll be a little dry to see any frost form, but that is a possibility as well.

Tuesday: Again, cool Canadian air will bring an additional chill to the air, keeping highs in the upper 50s under clear skies. Winds begin a turn towards the southeast overnight, keeping skies partly cloudy and lows near 40.

Wednesday: A wind shift back to the southwest on Wednesday sends temperatures into the mid 70s. Skies remain partly cloudy, and again we’ll see some wind gusts in the 20-30 mph range. An approaching low pressure center moving into the Ohio Valley is the culprit this time, dragging a cold front from the northwest into Virginia Wednesday night. Expect some rain showers along with this system as it comes through Wednesday evening. In addition, there’s the chance for some developing thunderstorms with this system as it moves in. It doesn’t look like a widespread or significant severe weather event, but storms are possible. The precipitation will keep temperatures fairly mild Wednesday night, dipping only into the low 50s.

The cold front isn’t a very potent one, and we’ll see continued temperatures in the 60s and lows in the upper 40s behind the front. Our next shot at some precipitation comes beginning Saturday night.