Weather! A bit of a chill in the air

A Canadian air mass moves into the region this weekend, bringing clouds and colder air with it. If we can make it through a cooler weekend, there’s some relief next week.

The snapshot of temperatures across the Mid-Atlantic tells the story this afternoon: 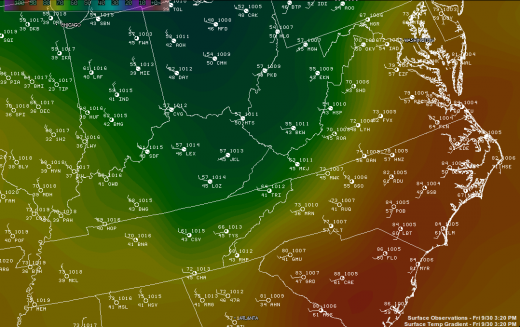 There’s a 20-degree temperature swing from east to west, as temperatures quickly drop from 84 into the low 60s across the Mountain Empire of Virginia.

The culprit is a cold Canadian airmass moving around the backside of a large area of low pressure centered over the Great Lakes. As the low moves out, winds are picking up on the backside of the low. And we’re not just seeing it in Virginia, either. Storm warnings for winds above 60 miles per hour are posted for all of Lake Michigan, where some Chicago residents got a rude awakening to the weather conditions this morning.

Some showers are popping up this afternoon as well. The primary line is developing over western Hanover and Goochland counties at the moment, and moving east into the metro. Plan on getting a little wet if you’re going to be outside for tonight. Don’t be surprised to see some thunder and lighting with some of these as well.

We hit 81 today, and temperatures are on their way down to 50 tonight as cloudcover builds and the winds pick up behind the front. The chilly weather really sets in place on Saturday, with highs only in the low 60s under mostly cloudy skies. It gets extra chilly on Saturday night, as lows drop to near 45. The last time we had a low in the 40s? May 7th. Conditions start to clear out a little bit on Sunday, with party cloudy skies and highs back in the low 60s. The winds continue to stay breezy through Sunday night, and lows again drop into the mid 40s.

The good news is that the cold won’t last. A big ridge of high pressure across the western 2/3 of the US will slide back in behind this low, and temperatures will climb back to near 70 by midweek. Unfortunately, with the return of the heat also comes the humidity. No good deed goes unpunished, I suppose. Enjoy your weekend.