Weather! Smoke clears Friday; Sun, thunderstorms ahead for the weekend

Smoke clears out after Thursday, but thunderstorms pop back in the forecast for Friday and Saturday. Plus, there’s more hints that something in the tropics may be coming our way.

The Lateral West fire, now two weeks old, continues to burn in the Great Dismal Swamp. As of yesterday, the fire has burned over 6,000 acres, and is considered to be 15% contained. Fire crews are using pumps to take water from Lake Drummond, at the center of the swamp, in order to flood portions of the swamp to help slow the fire’s advance. Officials describe the fire as a smoldering ground fire, burning into the peat and other

Light southerly winds near the surface are serving to transport some of that smoke closer to Richmond today, and the Virginia Department of Environmental Quality has issued a code orange air quality alert for today because of smoke in the area. Be glad you weren’t in Suffolk this morning, where thick smoke brought visibility to near zero.

The National Weather Service in Wakefield shared this photo in their Facebook page this morning showing dense fog in Suffolk. Some roads have been closed at times in the area because of limited visibility. 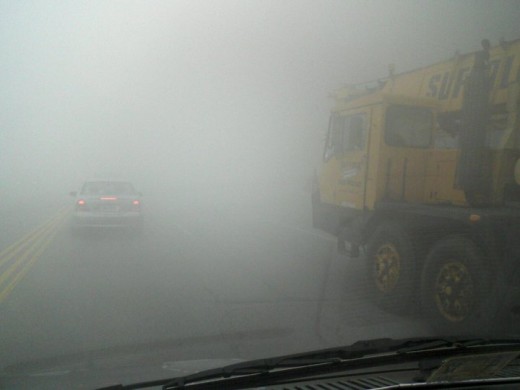 The Virginian-Pilot also has an excellent series of photos from areas in and around the swamp.

We’re also approaching historical peak of hurricane activity in the Atlantic, and we’re certainly not short on activity currently.

The National Hurricane Center is currently monitoring this area south of Jamaica for tropical development. This wave has been given an 80% chance of development into a tropical depression in the next 48 hours. A US Air Force Hurricane Hunter flight is scheduled to investigate the system this afternoon.

There’s a second area of interest in the central Atlantic, between the Cape Verde Islands off the coast of Africa and the Lesser Antilles on the eastern edge of the Caribbean Sea. The forecast for development is still very low, but it’s a system that could potentially impact the US if it continues to develop and track westward. Several of the long-range computer models have been hinting for the last couple days at a system impacting the southeast coast next weekend. It’s still way too early to say anything for certain about either this system or what the models hold, but if they verify we could be looking at a serious impact. If you’ve got beach plans for anywhere between Virginia Beach and Miami next weekend, you need to pay close attention to the tropics over the next week and a half.

The forecast for the next few days is both consistent and inconsistent at the same time. Temperatures through Sunday will peak around 90 each day, thanks to an area of high pressure hanging out around the southeast US. Low temperatures every night will drop back into the upper 60s each night. Winds will shift back to the west tomorrow, clearing out most of the smoke yet again. Our big thunderstorms days look to be Friday and Saturday, as a pair of disturbances will move through the region during the day. Thunderstorms will be a possibility both days, especially during the afternoon and evening hours.

Looking ahead to early next week, a cold front is expected to pass through the area on Monday, giving us another slight break in temperatures and humidity. Aside from Monday, we’ll stay mostly dry through Wednesday of next week.