Wear your heart on your sleeve: 5 #RVAdine T-shirts that totally rock Part pop culture homage, part inside joke–a handful of Richmond restaurant T-shirts have captured the spirit of their establishments for staff and fans to wear with pride. For Metzger Bar & Butchery and Saison, the influence is metal, and the T-shirts are badass. 821 Café and Lamplighter Roasting Company call on the talent of local artists to capture their vibes. And WPA Bakery riffs on a celebrity meme. The common thread is this: Boring shirts will not be tolerated.

New shirts are in!! #grillemall

Close your eyes and think back to a time when Metallica made palatable music. Are you imagining the cover of their debut album Kill ‘Em All? Good, good. That’s the inspiration behind the design of Metzger Bar & Butchery’s shirt, which includes a pork chop and cleaver upgrade. The design was the brainchild of Metzger bartender Kjell Anderson and Mathu Squila of Townsend Screenprinting, who also designed and printed the shirts.

Metzger co-owner and chef Brittany Anderson explains, “Kjell is obsessed with listening to “Wherever I May Roam” before service, so Metallica became the obvious choice for T-shirt inspiration.” If you really want to make heavy metal fans AND pork chop fans (and if I’m to believe this Venn diagram, there’s a ton of overlap here) do a double take on the street and then give you an enthusiastic high five, wear this exact shirt. Men’s and women’s sizes are each $15, $20 for XL and XXL. 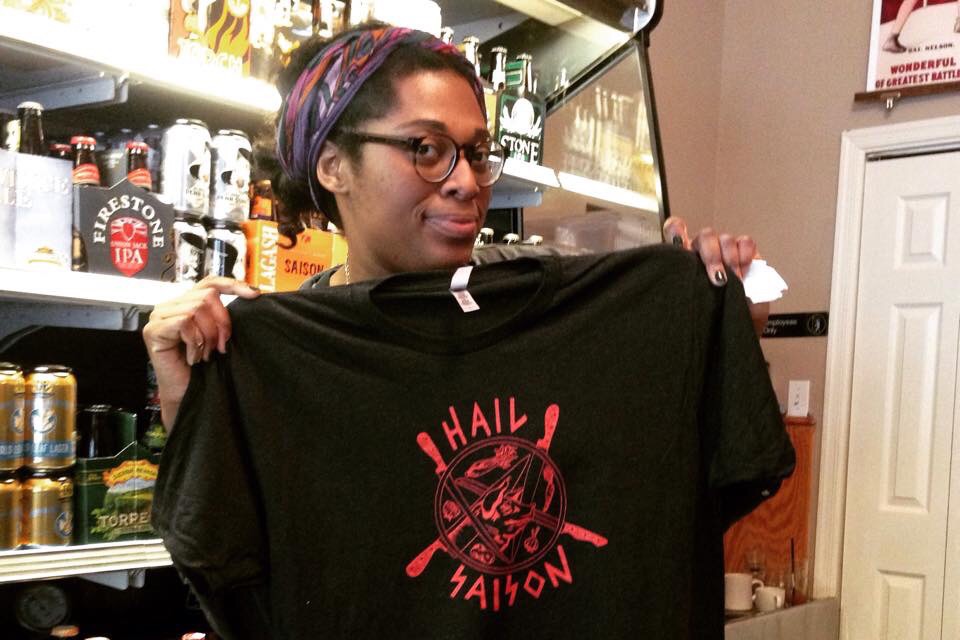 For Saison, inspiration came, as it often does, from Slayer. A pentagram of knives surrounds a pig head in what is arguably the toughest restaurant tee on the scene right now. Saison owner Jay Bayer credits Rose Deratto and says, “the design uses the main ingredients in our chile trotter broth that is in so many Saison sauces.”

Deratto adds, “It was a group effort, really. My boyfriend, Eli Talbert, works in the kitchen at Saison where several of the crew had been joking about a Slayer-inspired ‘Hail Saison’ shirt. I added the stock ingredients–the potato, onion, carrot, celery, and garlic, and pig head–as a reference to their pork stock and to all the other seriously delicious food that comes out of that kitchen. The knives are actually each based on a knife in my boyfriend’s set, which he inherited from his grandfather.” COOL.

The Hail Saison tee, printed by Golden Squeegee, is remarkably soft despite its tough appearance and is available in men’s and women’s sizes for $18, while supplies last.1 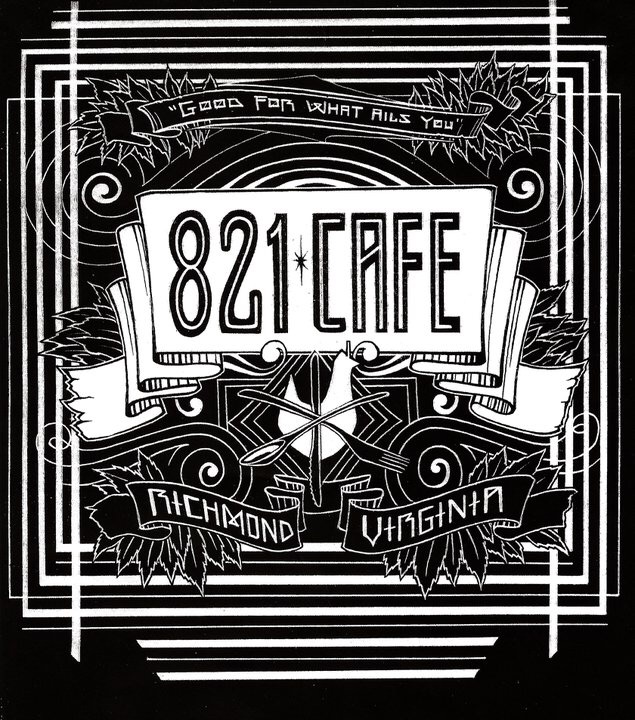 821 Cafe deserves credit for their particularly strong T-shirt game. Owner Andrew Clarke recalls six different well-loved designs in the history of the restaurant and says he would love to bring back his all-time favorite: “My favorite T-shirt we had printed has to be the ‘From our grill to yours.’ It was a mash-up of a really crappy shirt of a guy in a ski mask holding up two guns and some wacky back-of-the-house jokes. Our good friend Jim Callahan, aka ‘Barf,’ did the drawing for us.”

After the ‘Barf’ shirt, 821 collaborated with El Kamino, who had befriended the 821 crew during the artist’s shows at the restaurant. Old-timey snake oil labels and the Jack Daniels logo inspired the “Good for What Ails You” design. Clarke says, “Looking back on this design, it has a really neat art deco feel to it,” and adds, “His design also became the artwork on our first few runs of growlers. We switched the text to read ‘good for what ales you’.”

De facto 821 logo, Lil Squawky, took the spotlight in the next run of shirts. Clarke explains, “We had moved into the new location, had a new menu, and really wanted to have something that appealed to everyone and was instantly recognizable as an 821 shirt.”

After that there were two shirts released at the same time–one by Katie Davis of Salvation Tattoo, with whom 821 shared a 10 year anniversary in business, plus a ton of respect and friendship. Naturally, for something like that you’d want “an awesome wizard design and a two-color fade.” Most recently came the howling wolf T-shirt, also from Salvation Tattoo, this time courtesy of Nate Moretti, who combined a traditional howling wolf tattoo design with a woman serving beer. Clarke says, “I love this design. Its nice and simple and has gone on to be featured on our growlers.” 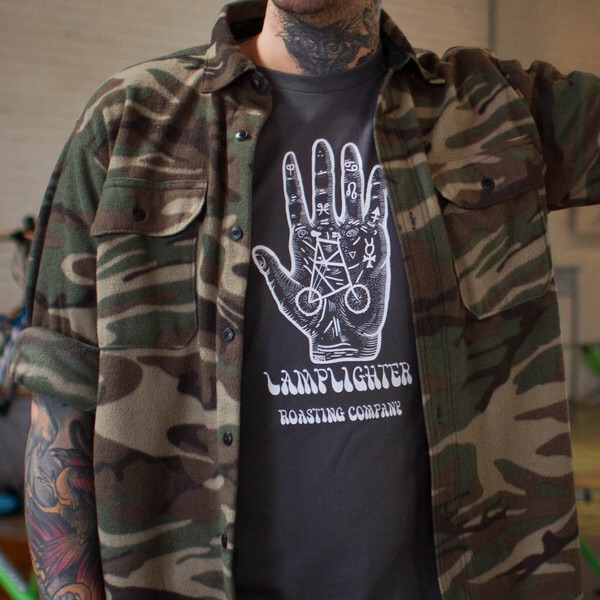 The Zodiac symbol for Cancer, an omega, and the company’s signature tall bike all adorn a palm in Lamplighter Roasting Company’s most recent shirt design. “When Noelle [Archibald] asked me to do a T-shirt design for Lamplighter, I knew exactly what to do. The tall bike logo has always looked like an occulty zodiac-ish symbol to me, so I went with the palm reader look,” says designer Brad Douglas (@bigzoidy). “It was more PG than the crude, low brow imagery I usually produce, but not boring and generic.”

Lamplighter co-owner Noelle Archibald says featuring work by local artists and using local printers like Action T-shirts is a priority. “For us, it’s not about pushing our logo; it’s about giving people a piece of the Lamplighter vibe to take home!” 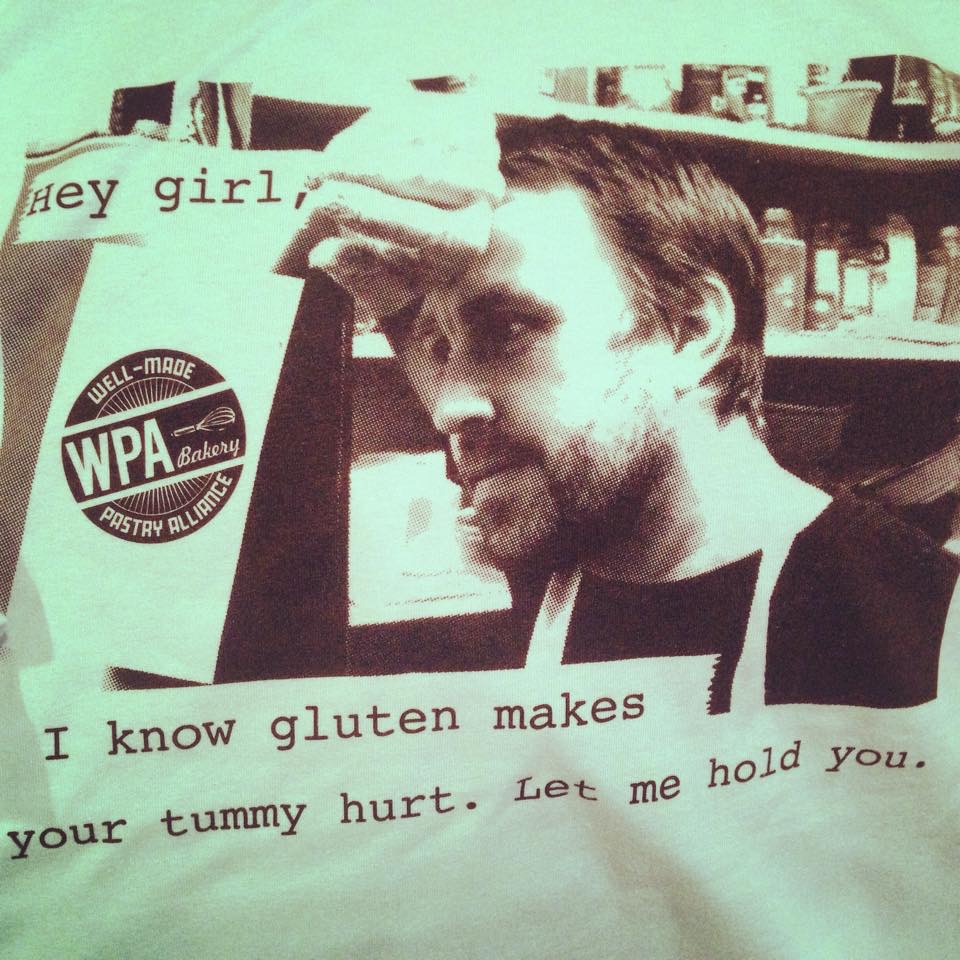 The Feminist Ryan Gosling meme is a total thing. It’s such a thing, there’s even a book about it. That’s right, it went from being a Tumblr to being a REAL BOOK. That’s basically like Pinocchio becoming a real boy and then going to Harvard.

If you’re unfamiliar, the meme works by juxtaposing a picture of film heartthrob Ryan Gosling looking dreamy with a feminist statement. Example: “Hey Girl, I would love to blow up the patriarchal dialectic that traps us in a constant struggle for dominant subject-hood…but I think you should do the honors.” So, yes, they are amazing.

Have you noticed how you never see Ryan Gosling and WPA Bakery co-owner and baker David Rohrer in the same place at the same time? And how they’re both super considerate of your needs and in tune with your feels? Well, I’m not saying Rohrer IS Gosling, hiding out in RVA and living his dream of being a dietarily-sensitive baker and artist, but I’m not saying he’s not either. 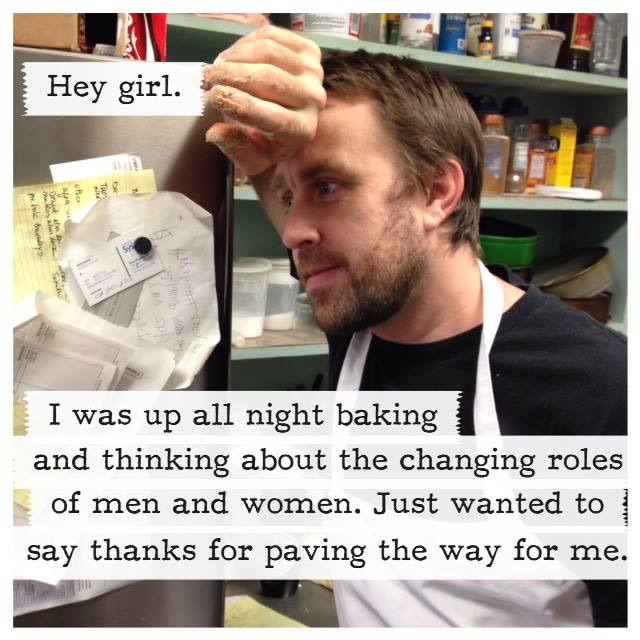 “It started out as an Instagram post,” says Rohrer. “Rachel Machacek [now of Style Weekly food writing fame took the picture of me and thought it reminded her of Gosling, so she posted the Feminist Ryan Gosling meme. When I got the Elby award a couple years back, my staff surprised me with a T-shirt.”

A tiny piece of David Gosling, uh, I mean Rohrer, is available for you to cry into at night for a mere $15. If you stretch it over your pillow and make out with it, no one will ever know. Trust me.

25 years ago, Millie’s was a pioneer in the cool shirt wilderness, and you can buy a piece of that history still, now with more fits, including a tank-top variation. Co-owner Lisa Edwards explains the story behind the iconic Lost Dog shirts:

“History is that the dog is named Dinsdale. He’s long been deceased, but he was a great dog and was Paul’s [Keevil] when Millie’s opened in 1989. He hung around a lot during pre-opening days, but when opening time came, he couldn’t come with him anymore, obviously, because of health codes. So he took off one day out of protest, and someone designed this poster as his ‘lost dog’ poster, and it sort of just stuck as a ‘thing.’ These shirts have been spotted all over the world and even made a cameo in a British sitcom once.” 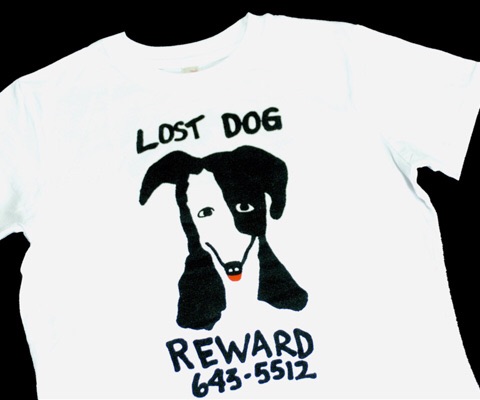 Edwards couldn’t remember the name of the sitcom, but she added that the dog eventually came back and lived a happy life before eventually running off to the big game of catch in the sky.

All photos courtesy of the restaurants’ emails or websites or Facebooks or Instagrams or what have you.