For nearly a decade, local business owners Michael and Dana Ng have served hordes of downtown Richmonders lunch at either one of their three food carts. They’ve had such success that the married couple have fulfilled their dream of opening their first restaurant. But will its location in Jackson Ward keep success away? I chat with them at Thai Corner’s grand opening.

If you’re curious, it was the hibachi shrimp: the first served dish at Thai Corner, located at 327 N. 2nd Street, which celebrated its opening yesterday in Jackson Ward. And when the shrimp dish arrived, inaugural customer Mike Grieve, founder of Custom Design and Fabrication, and long-time friend of the proprietors, smiled as he helped himself. “He makes the best sauce,” says Grieve between bites of shrimp, tyring his best to not let the enthusiasm he has for his lunch overcome the social courtesy of refraining to speak while one eats. Lunch today, however, is simply too good for him to contain his enthusiasm as we talk. “He really does.”

This “he” to which he refers is Michael Ng (pronounced like the ‘ing’ suffix in English words). He is the proprietor of the Thai Corner and also of the much-frequented Thai Cabin food carts. He has been renting this space for roughly eight years, using it first as a commissary to prepare Thai Cabin fare. “People would be knocking on the door,” says Michael of passersby who would smell Thai Cabin food being prepared, and ask if the food was for sale right then and there. For eight years Michael had to politely say that no, it wasn’t.

When Michael’s parents visited their son in the early days of Thai Cabin back in the early 2000’s, they were proud of their son’s property. In time, Michael would eventually buy adjoining buildings (he owns the property where Nate’s Taco Truck Stop currently rents space). But his mother would clutch her purse as her son showed her through Jackson Ward. “It was kinda rough back then,” says Michael. But he and his wife, Dana, saw the potential for Jackson Ward–a potential that seems to only have begun hitting its stride.

Michael was raised in Manhattan before moving at the age of fourteen to Chapel Hill, North Carolina to live with his uncle. “That’s when my life started,” he says. It was then that he worked in his uncle’s restaurants. Michael tells me of one instance while he was in his early twenties and having relocated with his uncle to Richmond, that he went into a bank to purchase an old Chi-Chi’s restaurant. In his hand was a briefcase full of money, a down payment on the building that he and his uncle had bought and that they would one day turn into a buffet. The bankers laughed at the thin and perpetually young-looking man, asking him when “his parents were going to arrive,” recalls Michael.

After establishing the buffet restaurant, his uncle advised him to start a food cart. This bemused Michael. “‘I ain’t going to push a rickshaw!’” Ultimately, Michael’s uncle convinced his dubious nephew that a food cart would be a profitable way to serve food, especially in the busy downtown lunch hour. Most food carts, as Michael reasoned to me, served the clichéd norm of quick food consumption for the ever busy downtown worker: hotdogs and french fries and pretzels, hardly exemplifying what quality restaurants are capable of producing. “Restaurant quality is all we know,” says Michael, a statement that was applied just as much in the summer of 2000 when the first Thai Cabin served lunch at 11th and Marshall streets, as it does at this very moment as Grieve eats his hibachi shrimp. “Freshly cooked entrees,” Michael tells me, were atypical of food cart vendors until Michael’s foray into downtown Richmond. The Thai Cabin cart, unsurprisingly,“took off.” He eventually added another one at 10th and Main, as well as a “noodle station” at 11th and Broad.

“It’s what we know,” says a confident, yet humbled, Michael of his food’s quality. 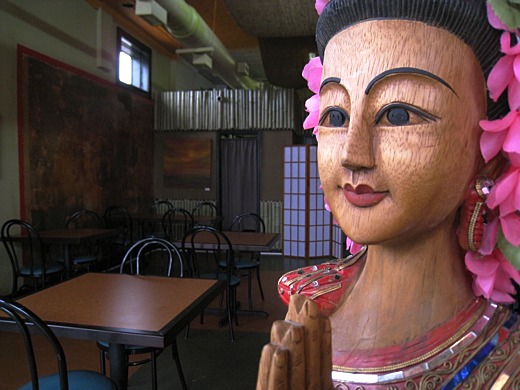 Think of the pressure that would come from organizing your own 100-person wedding (if such a thing was even advisable). Think about all that you would have to coordinate and ready and maintain for the ceremony to go off without a hitch. Think of all that stress.

With that in mind, you can begin to understand the temperament that Michael and Dana have in the thirty minutes before Thai Corner opens its doors to the public for the first time. If their bodies were able to keep up with the frenetic pace of their respective minds, I would be contending with two cartoon Tasmanian Devils circling the restaurant and kitchen at a neck-whipping cyclonic pace. When I first meet Michael and his wife, Dana, they are about as frantic as humanly possible before a stroke or heart attack brings them to rest. Despite this, they are still eager to talk and to make me feel at home.

“It’s exciting,” says Dana of opening the restaurant, making feverish to-and-fro motions with a mop on the restaurant’s tile floor as she speaks. “We’ve always talked about it,” she says of opening a restaurant of their own. However, giving birth to twins sidetracked their plans. “We were focusing on having kids first.” Now school-aged, the twins are in elementary school as mom and dad prepare their new restaurant. “It’s so hard to balance” family and work, says Michael. He’s up at 5am, preparing food for his carts at 7am. That’s why Thai Corner will serve only lunch. “For now,” says Michael.

As we chat, the owners of Ettamae’s Cafe, a Jackson Ward favorite, Laura Morand Bailey and her brother Matthew Morand, come in and sit down at a table. Dana brings them Thai iced teas. They are pleased that the Ng’s have opened a restaurant in the area. Between Nate’s Taco Truck Stop; Ettamae’s; Tropical Soul Cafe; and Mama J’s, all restaurants located within several blocks of one another (Nate’s is just down the street from Thai Corner), Richmond may have a new epicenter of desired dining. Of Jackson Ward, Laura Morand Bailey says “There’s always things going on.” But now people across Richmond are starting to take notice. Even though the current plan for creating an arts district in Jackson Ward is up in the air and may not include tax breaks for restaurants, there is a certain something in the air in one of Richmond’s oldest and most historical neighborhood.

When I first arrived at Thai Corner, I knocked on the open door of the kitchen. A tall, heavyset black man with bits of grey scattered in his circle beard and short cropped hair greeted me. He wears a black t-shirt and black apron. A solitary silver hoop earring dangles from his left ear lobe. His name is Bean. Black Bean, “like the kind you eat,” he says, smiling. He’s been preparing Thai Cabin food for 7 years. Today begins his duty to prepare made-to-order dishes for the restaurant. “It’s going to be great,” he says with a confidence in his voice. After we chat he moves back to the line, cutting and dicing ingredients for the big day. A stereo in the kitchen plays Lady Gaga’s latest single, the pop star announcing to the world “I’m on the edge of glory.”

At Thai Corner, success really is in the air.